Redskins' Haskins out for Cowboys game with ankle injury 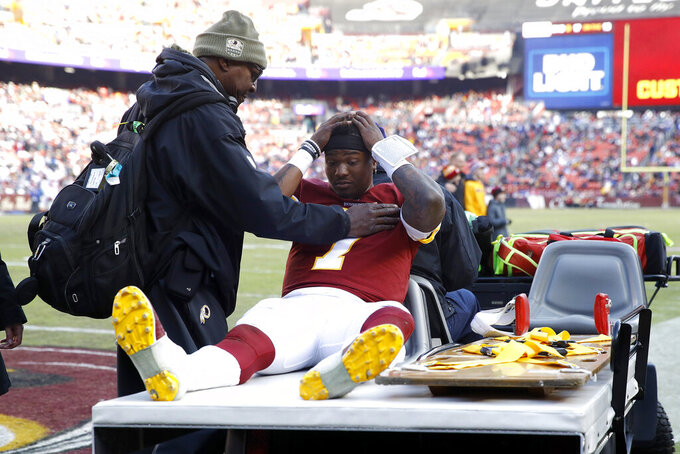 Washington Redskins quarterback Dwayne Haskins sits on cart while being taking off the field during the second half of an NFL football game against the New York Giants, Sunday, Dec. 22, 2019, in Landover, Md. (AP Photo/Patrick Semansky)

Dwayne Haskins' rookie season is over because of an ankle injury.

Haskins will not play for the Washington Redskins in their season finale Sunday at the Dallas Cowboys. The first-rounddraft pick sprained his left ankle on the first play of the second half during an overtime loss to the New York Giants.

Interim coach Bill Callahan ruled out Haskins on Monday and confirmed the quarterback has a high ankle sprain.

“It’s going to take a couple weeks, from my understanding," Callahan said of Haskins' recovery. "I think those things always change as more evaluation and more information they get on it. I think it’ll take some time no matter what.”

The Redskins are 3-11 and would clinch the second overall draft spot with a loss. Dallas can win the NFC East with a victory and a Philadelphia Eagles loss at the Giants.

Veteran Case Keenum is expected to start for Washington. Keenum relieved Haskins and led a 99-yard tying drive late in regulation before the Giants won it 41-35 on the first possession of overtime.

“I hated seeing Dwayne go down like that because he was absolutely dealing it,” Keenum said. “It was impressive to see him and how he’s progressed. But it was a blast to get out there. I wanted the ball one more time at the end, that’s for sure.”

Keenum hasn't started since Oct. 24 at Minnesota when he was concussed and Haskins entered in relief.

It didn't matter who's playing quarterback because the Giants game showed the Redskins have four exciting young receivers who should be around next season. Third-rounder Terry McLaurin, fifth-rounder Kelvin Harmon, undrafted free agent Steven Sims and second-year Alabama product Cam Sims could be great future building blocks along with Haskins and injured running back Derrius Guice.

Basically everything on defense.

The clock is ticking toward the end of Greg Manusky's tenure as defensive coordinator and probably on cornerback Josh Norman's time with Washington. There are pieces to work with particularly along the defensive line, but the secondary and linebacking corps are a mess and will need an overhaul.

Giving up so many points to New York was just the latest example of defensive incompetence.

“We didn't make the plays we needed to make on defense against them,” Callahan said. "We made some plays, but we weren't consistent enough throughout the duration of the game.”

It keeps going up for Steven Sims, who had six catches for 64 yards and another couple of carries to mix things up. The versatile receiver is arguably more of a steal than McLaurin because he can return kicks and punts and didn't even cost a draft pick.

“He’s just somebody who is so electric," Haskins said. “Any possible way to get him the ball, we were trying to give it to him.”

Norman got zero snaps while cornerbacks Danny Johnson, Kayvon Webster and Coty Sensabaugh were lit up by Daniel Jones. Unless Ron Rivera is somehow the next Redskins coach, Norman is as good as gone.

Right tackle Morgan Moses could go on injured reserve with a knee injury, opening a spot for Geron Christian against the Cowboys.

Two of the Redskins' six penalties against the Giants came against the offensive line: a false start on tackle Donald Penn and holding on guard Ereck Flowers. It has been a constant issue for the unit Callahan used to oversee and worth considering because each is a candidate to return.

The Redskins opened as a 14-point underdog against the Cowboys and are a loss away from clinching the No. 2 draft pick. They'll try hard and probably drop to 3-13 because Dallas still has a chance to win the NFC East.