Redskins may get difference maker at No. 2 with Chase Young 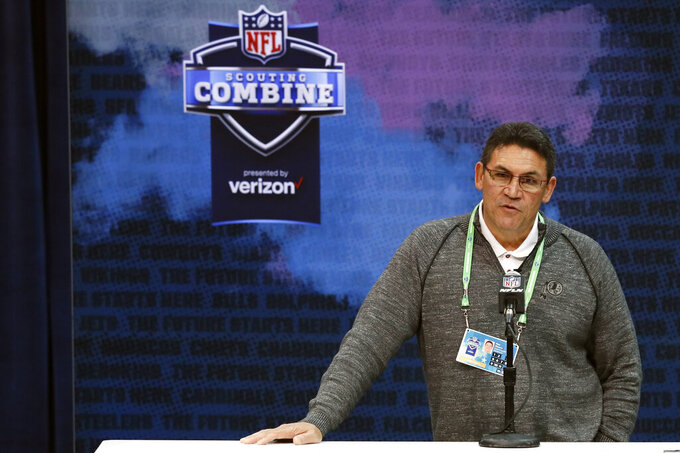 FILE - In this Feb. 26, 2020, file photo, Washington Redskins head coach Ron Rivera speaks during a press conference at the NFL football scouting combine in Indianapolis. This is supposed to be the Redskins' Chase Young draft. The chance to select the Ohio State pass-rusher with the second overall pick is a possible silver lining of a 3-13 season. Young is considered the top defensive player available after putting up 46 tackles and 16 1/2 sacks last year. New Redskins coach Ron Rivera cautioned to wait to see what happens with the No. 1 pick first. He has also taken calls from other teams about trading down. (AP Photo/Charlie Neibergall, File)

WASHINGTON (AP) — The locker room hadn’t even been cleaned out when Dwayne Haskins broached the silver lining of the Redskins’ 3-13 season.

It’s Ron Rivera’s first offseason as coach and decision-maker, and this is supposed to be Washington’s Chase Young draft. Barring a trade or another surprise at the top of the first round, the Redskins are expected to select the Ohio State pass-rusher with the second overall pick and make him the face of their defense.

“He’s somebody who’s like a game-wrecker, someone who’s very hard to stop,” said Haskins, who played with Young in college. “And he’s from this area, so we’ll see.”

Only two things are delaying the printing of burgundy “Young” jerseys to commemorate the addition of another D.C.-area native. Rivera cautioned he’s waiting to see what happens with the first pick, and Washington has taken calls from other teams interested in trading up to No. 2.

If LSU quarterback and Heisman Trophy winner Joe Burrow goes first overall as expected, the Redskins would be on the clock with the chance to take Young, who had 46 tackles and 16 1/2 sacks last season. Rivera believes a top-five draft pick should amount to a “high-impact guy” and said the question of trading down amounts to, “Did you really get value, or did you just get a whole bunch of picks?”

It’s a worthwhile question for the Redskins, who don’t have a second-round pick after trading it last year to move up for edge rusher Montez Sweat. Of course, Young might be the best player in the draft and would provide a major boost to a defense that ranked 29th in the league in 2019.

“I’ve heard great things about him,” vice president of player personnel Kyle Smith said. “I think everything (stands out). He’s got measurables, he’s got production, he plays hard. Those are all good qualities to have as a pass-rusher.”

Taking Young would be a best-player-available approach for Washington, which has Sweat and veteran linebacker Ryan Kerrigan and took defensive linemen Jonathan Allen and Daron Payne in the first round in 2017 and 2018. Cornerback is a more specific area of need after releasing Josh Norman and trading Quinton Dunbar, though Rivera’s 2016 Carolina Panthers team that went 15-1 and reached the Super Bowl was predicated on a fierce pass rush that helped the secondary.

“Hopefully, we grab (Young) and bring that pressure because rush and coverage work together,” said safety Sean Davis, who joined the Redskins on a one-year deal. “That’s what I live by and hope he can make some noise, put some pressure on the quarterback and make him throw some ducks in the air, make it easy for us on the back end.”

Young won’t solve all the problems, though. A decision still needs to be made on the future of holdout left tackle Trent Williams, who has asked for a trade, and there are holes to fill at offensive tackle, tight end and cornerback.

Then there’s the matter of a franchise quarterback, which might turn out to be Haskins after the previous regime spent the 15th overall pick last year on him. Rivera, who has no previous connection to Haskins, acquired Kyle Allen from Carolina and expects it to be a “good competition.”

The Redskins could shock everyone and take Alabama’s Tua Tagovailoa or Oregon’s Justin Herbert, either second overall or after trading down. If they want to address their most pressing need on defense, moving down and taking cornerback Jeff Okudah, another Ohio State product, is a possibility.

Smith has had a hand in some mid- and late-round gems — receiver Terry McLaurin and cornerback Jimmy Moreland last year, center Chase Roullier in 2017 and defensive lineman Matt Ioannidis in 2016 — and the Friday and Saturday portions of the draft will be important once again.

“I like the young core of players that this team has added in the last three drafts,” Rivera said. “I’d like to add a few more to that core.”