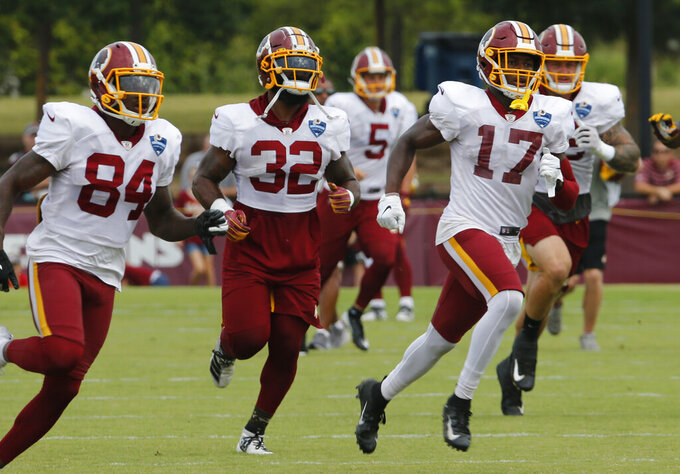 FILE - In this Aug. 5, 2019, file photo, Washington Redskins wide receiver Terry McLaurin (17) runs drills with teammates Samaje Perine (32) and Darlin Kidsy Jr., (84) during the Washington Redskins NFL football training camp in Richmond, Va. The Redskins will become the first NFL team to have a gambling-focused telecast of their games, offering cash prizes to viewers who correctly predict in-game outcomes during the preseason. The telecasts on the regional cable network NBC Sports Washington will follow a formula established by the Redskins’ NBA neighbors, the Washington Wizards. (AP Photo/Steve Helber, File)

The Washington Redskins will become the first NFL team to have a gambling-focused telecast of their games, offering cash prizes to viewers who correctly predict in-game outcomes during the preseason.

The network will continue to offer a traditional telecast on its main channel, while the gambling-focused telecast will air simultaneously on its secondary channel, NBC Sports Washington Plus. The Wizards offered the alternate telecast on eight games this season, and they saw increased ratings and fan engagement, said Damon Phillips, the network's general manager.

Starting the interactive telecasts now allows the network to be ready when legal online or mobile sports betting becomes available in its viewing area, Phillips said. The network in theory could accept real-time wagers on proposition bets offered during the telecast if it partnered with a sportsbook.

"Down the road there are a number of possibilities," Phillips said. "Who knows where the different regulatory entities are going to end up on sports betting, and we just want to make sure we're ready to be able to respond to it."

For now, the games are free to play and the network will give away $1,000 in cash to one winner per quarter of each game.

"We think this is the way of the future. There's going to be a gamification of television broadcasts, and this is one of the first examples of it," Phillips said.

The District of Columbia Council legalized sports betting in Washington this year, although the regulations have not been finalized and no sportsbooks have opened. Bills have been introduced to legalize sports betting in Virginia and Maryland, which would require voters in those states to approve it in a referendum.

Delaware and West Virginia, which are in the NBC Sports Washington viewing area, are among the 10 states that already have legal sportsbooks. Neither state currently has online or mobile betting, however.

The NFL has historically been opposed to gambling on its games, although it publishes injury reports that sportsbooks use to adjust point spreads, and it has embraced daily fantasy sports, in which fans wager on the performances of individual players rather than the outcome of a game. The NBA, NHL and Major League Baseball have been more eager to embrace sports betting in states where it is legal, and they have created business partnerships with sportsbook operators. Caesars Entertainment became the NFL's first casino sponsor this year, but the deal does not include sports betting or fantasy football.

Jessie Johnson, a Redskins spokeswoman, said the league was aware of the planned telecasts and raised no objection.