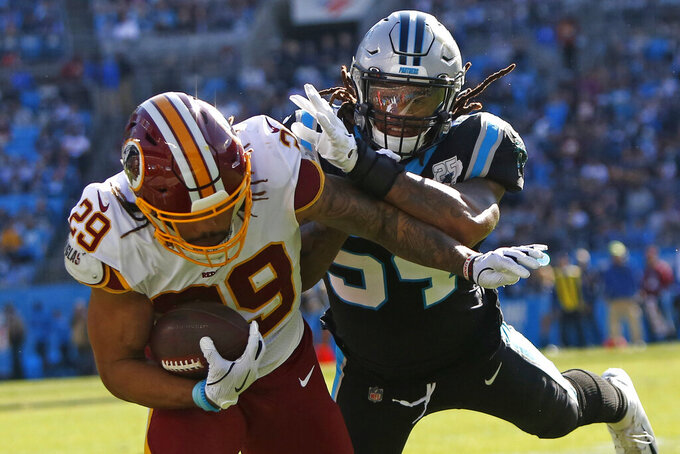 ASHBURN, Va. (AP) — The Washington Redskins are shutting down injured running back Derrius Guice for the rest of the season.

Washington on Tuesday put Guice on season-ending injured reserve with a left knee injury. The second-year back injured the knee in the Redskins' most recent loss Sunday at Green Bay.

At 3-10 and eliminated from playoff contention, the Redskins had no reason to risk rushing Guice back from his latest injury. This is the same knee Guice tore the ACL in during a preseason game in August 2018.

“This guy’s upbeat, he’s positive, he’s got more energy than the entire building, so it ain’t going to hamper him or stifle him or hold him back by any means,” interim coach Bill Callahan said Monday. "I love the guy. I love his energy and what he brings to the table every day, how he comes into the meeting room, how he goes to the practice field. He’s just a bundle of energy and he gives us a catalyst that most teams don’t have. I’m proud to have him on our team and I’m proud to coach him."

The Redskins promoted running back Josh Ferguson from the practice squad to fill Guice's spot on the roster. They also activated Danny Johnson off the physically unable to perform list to replace fellow cornerback Simeon Thomas, who was suspended four games for violating the NFL's substance abuse policy.