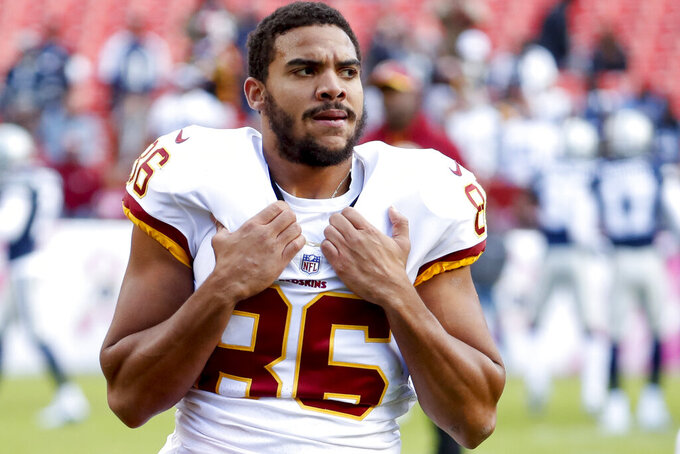 WASHINGTON (AP) — The Redskins released Jordan Reed on Thursday, cutting ties with an injury-prone tight end who was rarely able to show his full abilities.

Injuries from head to toe limited Reed to 65 games over his first seven years in the NFL, all with Washington. He missed the entire 2019 season with his fifth documented concussion as a pro and seventh going back to his college career at Florida.

Releasing Reed clears $8.5 million in salary cap space to give Washington more than $63 million to spend in free agency. The Redskins have needs all over but are now particularly thin at tight end after moving on from Reed and Vernon Davis retiring.

Reed was a matchup nightmare as a pass-catcher when healthy. A third-round pick in 2013, he caught 329 passes for 3,371 yards and 24 touchdowns and was a favorite option of Washington's many quarterbacks during his tenure there.

But he was on and off the field so much that the Redskins ultimately decided to move on. He missed time with hamstring, ankle, shoulder, chest and toe injuries and the multiple concussions.

The most recent concussion came in August in a preseason game at Atlanta. Reed made progress and practiced with the team in mid-September but was not able to get into a game.

The 29-year-old hits the open market after only recently clearing concussion protocol.