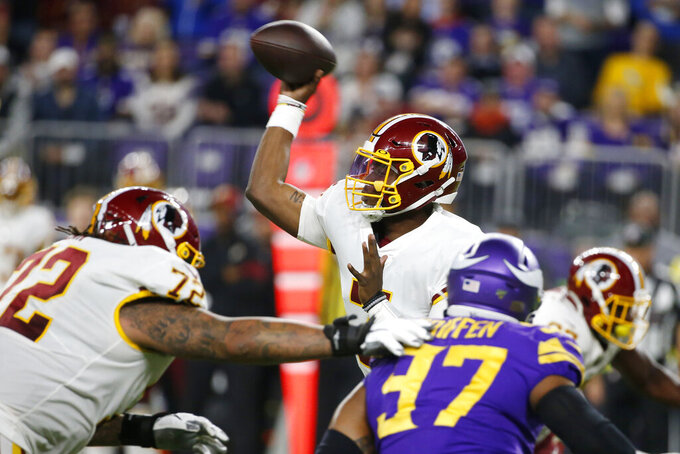 Washington Redskins quarterback Dwayne Haskins, center, throws a pass during the second half of an NFL football game against the Minnesota Vikings, Thursday, Oct. 24, 2019, in Minneapolis. (AP Photo/Bruce Kluckhohn)

ASHBURN, Va. (AP) — When Dwayne Haskins takes the field for the Washington Redskins' first offensive snap Sunday at the Buffalo Bills, he'll be the fourth rookie to start a game in the NFL this season.

Unlike fellow first-round picks Kyle Murray of the Arizona Cardinals and Daniel Jones of the New York Giants, it won't be because the organization dubbed it Haskins' time. It'll be more like Jacksonville Jaguars sixth-rounder Gardner Minshew, who was thrust into action Week 1 after Nick Foles was injured.

Despite using the 15th overall pick on Haskins in part because he went to high school with owner Dan Snyder's son, the Redskins — through two coaches now — have been reluctant to hand the keys to him. Journeyman Case Keenum won the starting job out of training camp, when it was obvious Haskins was talented but not ready, and since-fired coach Jay Gruden turned first to longtime backup Colt McCoy.

Keenum's concussion against Minnesota forced Haskins into his second relief appearance of the season. Interim coach Bill Callahan on Friday named Haskins the starter, but this is certainly not a declaration.

"Case is our quarterback and that's where we're rolling right now," Callahan said this week. "I really believe at the beginning of the year, Case earned the starting quarterback position. He was voted captain by his teammates, certainly deserving, certainly our starting quarterback. So, we're not confusing the issue here: Case is our starter and if he's healthy and ready to play this Sunday, he will be going forward."

With that and plenty of almost fatherly advice from older teammates, Haskins will try to improve on 12 of 22 passing for 140 yards and four interceptions in games against the Giants and Vikings. Asked the next step in his progression, the Ohio State product said: "First start. We'll see how it goes from there."

There were times in camp when Haskins showed the rocket arm that threw for 4,831 yards and 50 touchdowns last season at Ohio State, along with plenty of evidence he's more of a long-term project.

Redskins players haven't been shy to challenge Haskins before, during and after his struggles in limited pro action. Even though running back Adrian Peterson took issue with a report he told Haskins to get his nose in the playbook and prove people wrong who think he doesn't know plays, he agreed with the assertion that one particular throw against Minnesota wasn't the rookie's best.

"It don't take a rocket scientist to see that," Peterson said. "He's got it incredible arm. He can throw the ball. All he's got to do is put a little more zip on it, we got a first down, now we're going for a touchdown. It's simple things. It's nothing major."

"I've talked to him several times," Bostic said. "I make sure I tell him before every game he should have a notebook on every coordinator that he's playing, regardless if you're in there or not. Because teams will change, players will change, but coordinators won't. The system is going to be the same. So start learning these guys now. You're watching and everything. I was like: 'You should be taking these mental reps on the sidelines and take them seriously. You should be going through every read.'"

Haskins has been getting starting QB snaps at practice since Callahan took over for Gruden, who was criticized for not putting more energy into developing him despite coaching for his job.

After the loss to the Vikings dropped the Redskins to 1-7, Callahan said Haskins could learn some valuable things about game management.

"I think the big thing is situational awareness and knowing where we are at on the field — trajectory of throws, fundamental techniques, those rotations and follow through," Callahan said. "Getting in and getting out of the huddle, really working the offense at an upbeat tempo where he can have time at the line of scrimmage. Sometimes just not letting the clock run down on him."

The clock is running down on a lost season in Washington, but Callahan said he's getting no direction from president Bruce Allen or anyone in the front office about developing players for the future. He has likened Haskins' situation to Steve Young sitting behind Joe Montana and Aaron Rodgers behind Brett Favre.

Keenum is not a future Hall of Famer, but the Redskins don't want to hurry Haskins into action before he's ready, even at the expense of not knowing yet what he can do.

"In all fairness, if we say hey, we are going to put Dwayne in there and see how he does, in some respects, I think he needs a little bit more work," Callahan said. "I think time is invaluable where he can sit back and learn from quarterbacks like Case and Colt as well as players like (injured QB Alex Smith) who is around the building.

"It is a fine line. We are trying to win games still. Our dynamic is tough and it is challenging. We are doing the best we can in a tough scenario and we are trying to find a way to win a game."