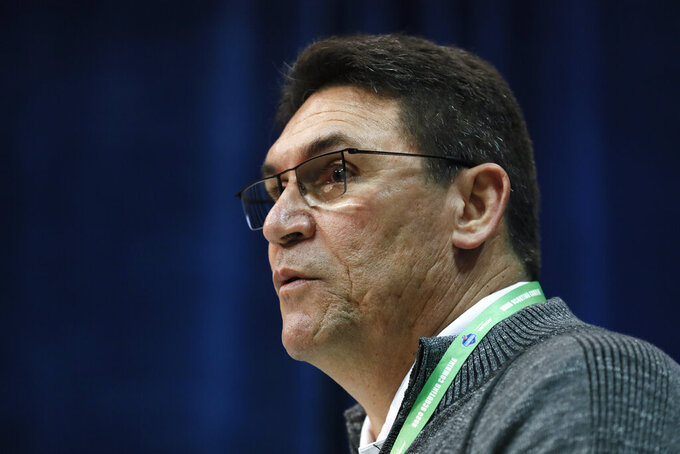 WASHINGTON (AP) — The Redskins are beginning to revamp their roster in free agency under new coach Ron Rivera.

Washington on Wednesday agreed to sign safety Sean Davis to fill a void in the secondary. He's one of a handful of new additions since Rivera took over control of football operations.

Agent Drew Rosenhaus told The Associated Press that Davis is signing a one-year deal that could be worth up to $5 million. Davis looks like a low-risk, high-reward addition for the Redskins, especially given the uncertain future of safety Montae Nicholson after a couple of troubling off-field situations.

The 26-year-old Davis missed most of the 2019 season with a torn labrum in his right shoulder. Before that injury, he'd become a starter for the Pittsburgh Steelers and had five interceptions, 20 passes defensed and 247 tackles in 48 NFL games.

He's also a Washington native who played at Maryland. The Steelers drafted him in the second round in 2016.

Adding Davis is more incremental progress for the Redskins, who also agreed to terms with linebackers Thomas Davis and Kevin Pierre-Louis, re-signed Jon Bostic to a two-year deal worth $6.6 million and are expected to bring back cornerback Kendall Fuller, who was sent to Kansas City in 2018 in the trade that brought quarterback Alex Smith to Washington. They needed more depth at linebacker with Rivera switching to a 4-3 defense run by new coordinator Jack Del Rio.

That defense could get a big boost if drafting Ohio State pass-rusher Chase Young with the second overall pick in the draft is the reward for a 3-13 season. It's already stacked on the defensive line with 2017 and 2018 first-round picks out of Alabama, Jonathan Allen and Daron Payne.

Washington added some help on the offensive line by agreeing to terms with guard Wes Schweitzer. He's expected to compete with 2019 draft pick Wes Martin to start at left guard, and the right side is set after Washington put the franchise tag on three-time Pro Bowl selection Brandon Scherff.

Questions remain on offense with left tackle Trent Williams a serious candidate to be traded and a major unknown at quarterback. Dwayne Haskins started seven games in 2019 after being the 15th overall pick last year and looked like the franchise QB, but owner Dan Snyder is allowing Rivera total control over the direction of the organization.

Thomas Davis already reunited with his old coach after playing eight seasons for Rivera with Carolina. The Panthers said this week they gave QB Cam Newton permission to seek a trade, and Rivera has made it known he'd like to add a veteran at the position.