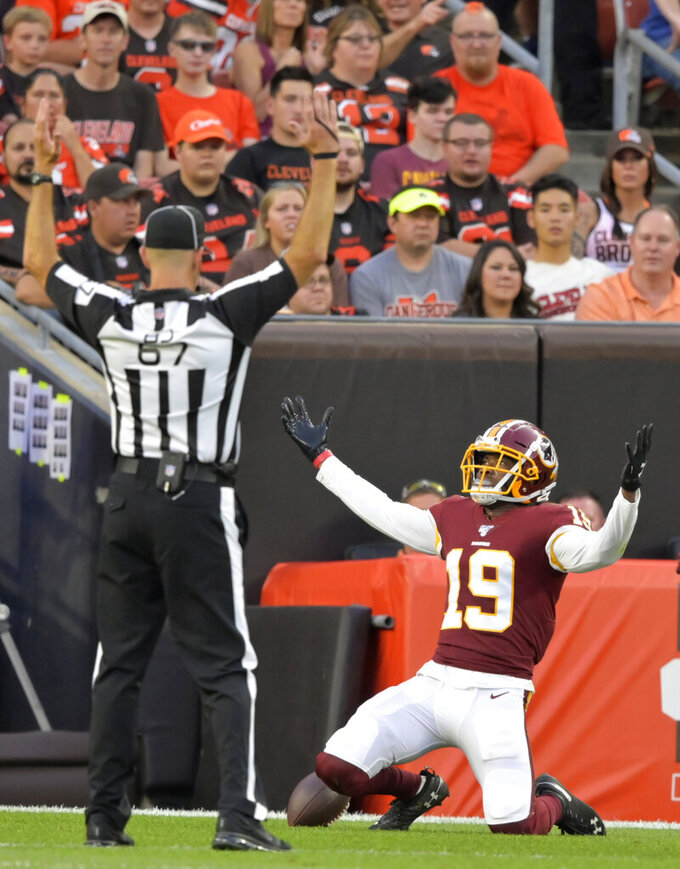 FILE - In this Aug. 8, 2019, file photo, Washington Redskins wide receiver Robert Davis (19) reacts after a 46-yard touchdown during the first half of the team's NFL preseason football game against the Cleveland Browns in Cleveland. It was Davis' team's only touchdown in their first preseason game. (AP Photo/David Richard)

RICHMOND, Va. (AP) — The Washington Redskins broke camp Sunday and headed to their Ashburn training facility still seeking answers to two major questions about the offense: Who will be their quarterback, and who will be his receivers?

The quarterback battle is a three-way fight with veterans Case Keenum and Colt McCoy sharing snaps with first-round draft choice Dwayne Haskins, and the receiver battle is 11 strong with a mix of former draft choices still waiting for breakthrough seasons, lightly used holdovers from last season and promising rookies.

The leading returning pass-catcher at the wide receiver spot is fourth-year pro Josh Doctson, who had 44 receptions last season. Next is Paul Richardson, who had 20 catches.

In the preseason opener against the Cleveland Browns, Robert Davis scored the Redskins' lone touchdown on a 46-yard pass from Keenum. Darvin Kidsy stood out as the top receiver with five catches, but also because after one of his catches, he fumbled and the Browns recovered.

Kidsy, a second-year player from Texas Southern, would appear to have a leg up in some ways, having spent most of last season getting familiar with the offense on the practice squad before being activated late last season.

He also hopes his drive to prove something as an undrafted free agent is a plus.

"In some situations, it does" feel like an advantage, he said. "In other situations, I don't have as much hype as the other guys but yes, it always gives me a sense of urgency in every play and everything I do."

The fumble, then, could be a prominent mark on the negative side.

"Just hold onto it. That's really what I told myself," Kidsy said. "Next play."

Terry McLaurin's advantages are speed and familiarity not with the offense so much, but with Haskins, the sixth overall pick from Ohio State in the draft. The Redskins took McLaurin, another Buckeye, in the third round.

"I don't really see myself having pressure, but at the same time I have an expectation of myself," he said "I feel like I was drafted to come in here and contribute and make plays. I feel like I've done that so far."

Getting so many receivers vying for spots on the roster enough work to properly evaluate them can be "tricky," coach Jay Gruden said, as will deciding, in the end, how many come with the team into the season.

Many contenders take turns after practice catching passes from the Jugs machine. Trey Quinn, whom Gruden said has an inside track on the slot receiver spot, often finishes by trying to make one-handed catches.

"On the stat sheet it doesn't go down as a one-handed catch, but I like it to have that on my repertoire to be able to have a wider catch radius," he said. "I think that's appealing to quarterbacks and play-callers."

Besides, he said, keeping a sharp edge is important.

"It's just as competitive as the regular season because there's a lot of guys fighting for a job," he said.

The competition is intense, but so are the relationships, said Jehu Chesson.

"We could go out and go to Top Golf and you'll see guys competing," said Chesson, who caught one pass last season. "It's in your blood and, if it's not, I have no other way of saying it but you don't belong out here."

The more a player brings to the table, the better his chances.

The Redskins next preseason game is Thursday night at home against Cincinnati.

NOTES: The team signed Jalan McClendon to replace Josh Woodrum, who sustained a torn pectoral muscle in a 30-10 loss to Cleveland in the preseason opener and is out for the season. McClendon played in college at Baylor.