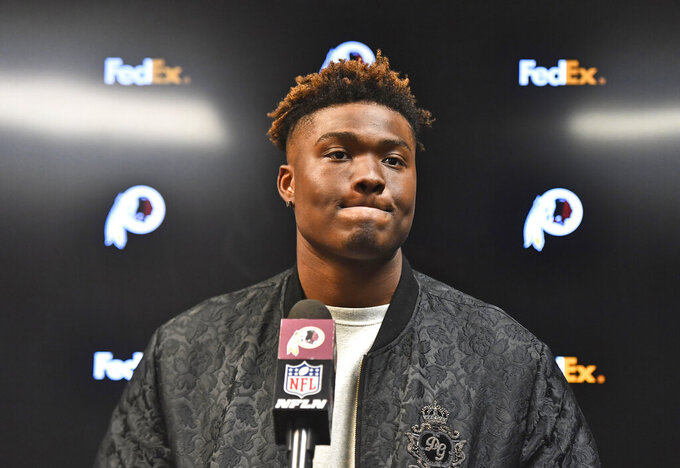 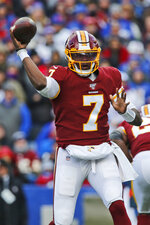 Haskins was an acceptable 15 of 22 for 144 yards, avoided the interception trouble that plagued him in two relief appearances but didn't complete a pass longer than 22. There's no guarantee the 15th overall pick will be Washington's permanent starter when the New York Jets visit Nov. 17 following the bye week.

"Nothing has been decided or determined," Callahan said. "I'm just going to give it a little time and go into the bye week, let everything settle, look at the health of (concussed veteran Case Keenum) and see where we're at as a team and make a decision going forward for the best of our team."

Callahan's run first, run second and run third approach is paying dividends, and Adrian Peterson is in a groove. Peterson ran the ball 18 times for 108 yards, an average of 6 yards a carry.

"We just felt that we're confident in ourselves," Callahan said. "We have a good, solid running back ... and the concepts were good."

The defense that entered the season with big expectations continues to struggle. The bend-but-don't-break stretch against San Francisco and Minnesota wasn't going to last forever.

Washington's third-down defense is second worst in the NFL, and that's taking its toll.

"We're not just playing as a whole (group) the whole game," rookie cornerback Jimmy Moreland said. "It's small little defining moments that changes the game. We're not competing at a confidence right now. We just have to get better."

Haskins showed promise in his first pro start, even if he'll be kicking himself for some rookie mistakes.

"I thought it was a good start as far as my experience," Haskins said. "There are some things we want to take back and we didn't execute at a high level in all phases of everything, as far as our game plan and something we can continue to work on and get better at. As I get more reps and more experience, I feel like I can be in more control of certain things, and that will come with time."

Given that the Redskins' playoff hopes are long gone, there's no logical argument against handing the starting job to Haskins now, if only to see what they have in him ahead of the draft.

After leading all rookies with 23 catches — five for touchdowns — and 408 yards, Terry McLaurin is now being treated like the premier offensive weapon he is. Opposing defenses have clamped down on McLaurin, a third-round pick out of Ohio State who at one point was a front-runner for offensive rookie of the year.

Buffalo held McLaurin to four catches for 39 yards. Haskins, his college teammate, said the Bills were clouding McLaurin — and now it'll be up to him and offensive coordinator Kevin O'Connell to devise a solution for that.

Washington continues to be without versatile third-down back Chris Thompson (toe), tight end Vernon Davis (concussion) and safeties Montae Nicholson and Deshazor Everett (ankle). The bye week comes at a good time for those players and Keenum, whom Callahan trusts much more than former backup Colt McCoy, the favorite of since-fired coach Jay Gruden.

13 — The number of quarters the Redskins' offense has gone since scoring a touchdown dating to a 17-16 win at Miami on Oct. 13.

Now that Haskins has two full weeks to study the playbook, the Redskins should be able to expand options from the condensed menu he had for his first start.