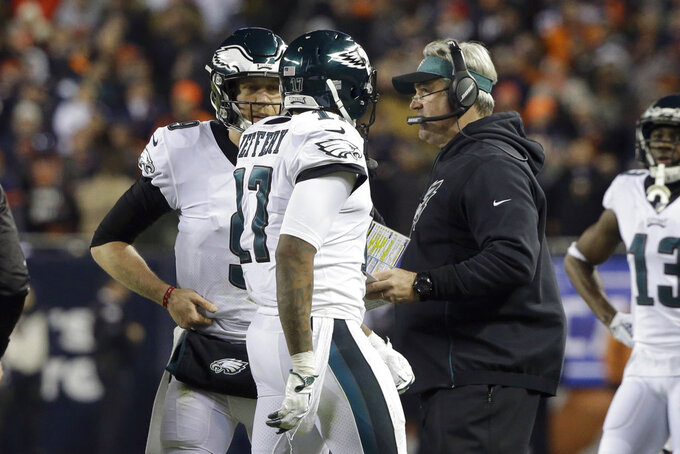 PHILADELPHIA (AP) — When the Philadelphia Eagles gather around their coach in the locker room after each win, Doug Pederson yells: "We're not done yet."

The defending Super Bowl champions were written off after a 48-7 loss to the New Orleans Saints dropped their record to 4-6 in November.

They responded with two wins before an overtime loss to Dallas knocked them out of contention for a division title. But backup quarterback Nick Foles has led the Eagles to four straight wins, including a 16-15 comeback victory over Chicago in an NFC wild-card game.

Now, the Eagles (10-7) are heading back to New Orleans to face the Saints (13-3) in a divisional playoff game on Sunday.

"We hear disrespect. We listen. It's hard not to hear. A bunch of talking heads said we were done," defensive end Chris Long said after Philadelphia upset the Bears.

"I heard somebody say we needed to start worrying about losing games so we can get a higher draft pick, somebody that gets paid a lot of money. And that's fine. People are wrong sometimes. Not everybody knows what is going on. We're a tough team and the chips have been down for us before."

The Eagles are in a familiar role as playoff underdogs, but they have a much tougher road this time around as they try to become the third No. 6 seed to win the Super Bowl.

Last season, the Eagles entered as the No. 1 seed. They were underdogs in every game because they were missing starting quarterback Carson Wentz.

They've been in playoff mode for a month now after Wentz went down with a back injury. They had to win three straight games, including consecutive wins over the playoff-bound Rams and Texans, and get help — the Bears defeating the Vikings in Week 17 — to reach the playoffs.

Then they had to rally against the stingiest defense in the NFL, taking a one-point lead over the Bears when Foles tossed a 2-yard touchdown pass to Golden Tate on fourth down with 56 seconds remaining. The victory was secured when Treyvon Hester tipped Cody Parkey's 43-yard field-goal attempt and the ball hit the left upright and then the crossbar.

"We keep winning. We keep putting ourselves in a position to be successful," Pederson said Monday.

A rematch against the Saints was difficult to imagine when the Eagles left New Orleans on Nov. 18. Wentz had the worst game of his career and Drew Brees dominated an injury-depleted secondary. But the team never quit.

"Immediately after the game, you flush it and you're moving on to the next week's opponent," Pederson said. "I think you just have to look at where we've come and what we've done," Pederson said.

"Just the way this team has come together at the end of the season, to be counted out with even about three games to go. ... This team believes in everything that we're doing, and you saw it yesterday and we're different. It's a different mind-set. It's a different football team. And we're a different group than when we played New Orleans the first time, and we're learning from it and obviously have been better since."