Relying on the run is formula for Eagles' success 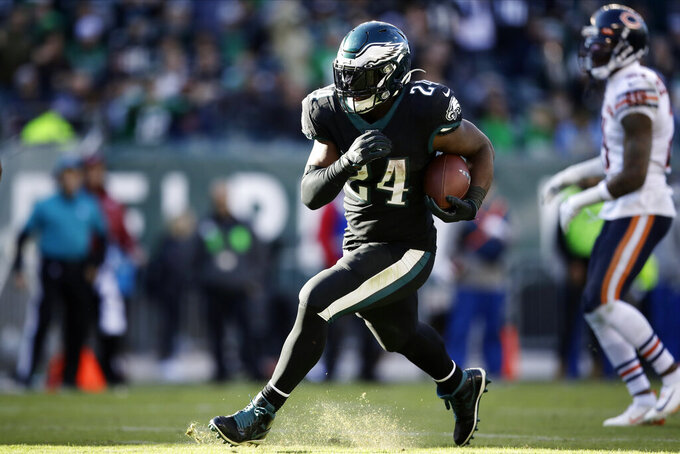 Philadelphia Eagles' Jordan Howard rushes for a touchdown during the second half of an NFL football game against the Chicago Bears, Sunday, Nov. 3, 2019, in Philadelphia. (AP Photo/Matt Rourke)

PHILADELPHIA (AP) — Changing their identity might give the Philadelphia Eagles their best chance to make a playoff run.

Though the Eagles (5-4) have been a pass-first offense under coach Doug Pederson, they are more successful when they commit to running the ball. Since 2016, they're 21-2 when they have at least 120 yards rushing and 9-11 when they have 275 or more yards passing.

Relying on a strong ground attack when they return from a bye could help them overtake Dallas (5-3) in the NFC East, especially with DeSean Jackson out for the season.

"I think every team in the NFL would say they're a better team when they're able to establish the ground game," quarterback Carson Wentz said. "I think that's the recipe to open up the passing game and the play-action, the boot legs, and all of that."

Jordan Howard and Miles Sanders are a terrific tandem in the backfield. Howard has 525 yards rushing and six touchdowns. Sanders has 336 yards rushing and one score. Both are averaging 4.4 yards per carry and each has a TD receiving. Sanders has been Philadelphia's best big-play receiver since Jackson injured his abdomen in Week 2. He has 22 catches for 305 yards and his average of 13.9 yards per reception is second behind Jackson's 17.7.

"Jordan has about as good of a feel for zone-blocking and zone plays as you can get when it's the mid-zone," center Jason Kelce said. "He has the patience and the vision and the hard work. He's a very even-keeled, go-about-his-business, lunch-pail type of guy. I have a lot of respect for how he goes about his business and plays this game."

Howard is a tough, physical runner who always seems to go forward and gets positive yards. Sanders is flashy, explosive and can go the distance any time he touches the ball. He had a 65-yard TD run against Buffalo.

"I can't say enough good things about him and really all the running backs," Wentz said. "But just the way he's come in as a rookie and willing to learn. We've asked a lot of him from obviously running the ball, catching the ball out of the backfield, picking up protections. We put a lot on his plate and he's really handled everything well and been able to make a lot of splash plays, a lot of big plays for this offense."

Sanders, Howard and the offensive linemen would be happy to see Pederson turn the Eagles into a ground-and-pound offense.

The problem for the offense so far has been the wide receivers. Zach Ertz and Dallas Goedert are excellent tight ends, but the wideouts aren't getting open or making plays. Jackson played one full game and now is recovering from surgery to repair a core muscle injury. Alshon Jeffery has struggled with drops. Nelson Agholor has also had issues catching the ball and getting open. Mack Hollins and rookie second-round pick J.J. Arcega-Whiteside have one catch combined over the past six games.

Agholor and Arcega-Whiteside dropped what would've been go-ahead touchdown catches in the final two minutes in consecutive close losses in September.

"We just have to continue to work with these guys," Pederson said, referring to Jeffery and Agholor. "Every week is a new week. Every week is a new set of challenges. As we put game plans together, we do think about these guys and putting them into positions and look, sometimes you get in the game, and I'm the one calling the plays and sometimes the game kind of steers a different direction than what you think during the week. But I think overall, these guys have been in a position to help and help us win, and have a lot of confidence in both those guys moving forward."

On defense, the Eagles are getting healthy and improving. They're 2-1 this season and 15-5 overall with cornerbacks Ronald Darby and Jalen Mills starting together.

"We are getting there. We are definitely warming up," Mills said. "Coming off of this bye, everyone is going to rest their mind and rest their body and we are going to come back and play the Patriots at top level."

Tough homes games are coming up against New England (8-1) and Seattle (7-2). Keeping the ball away from Tom Brady and Russell Wilson would certainly seem like a formula to win. Howard and Sanders could do that if Pederson sticks to the run.