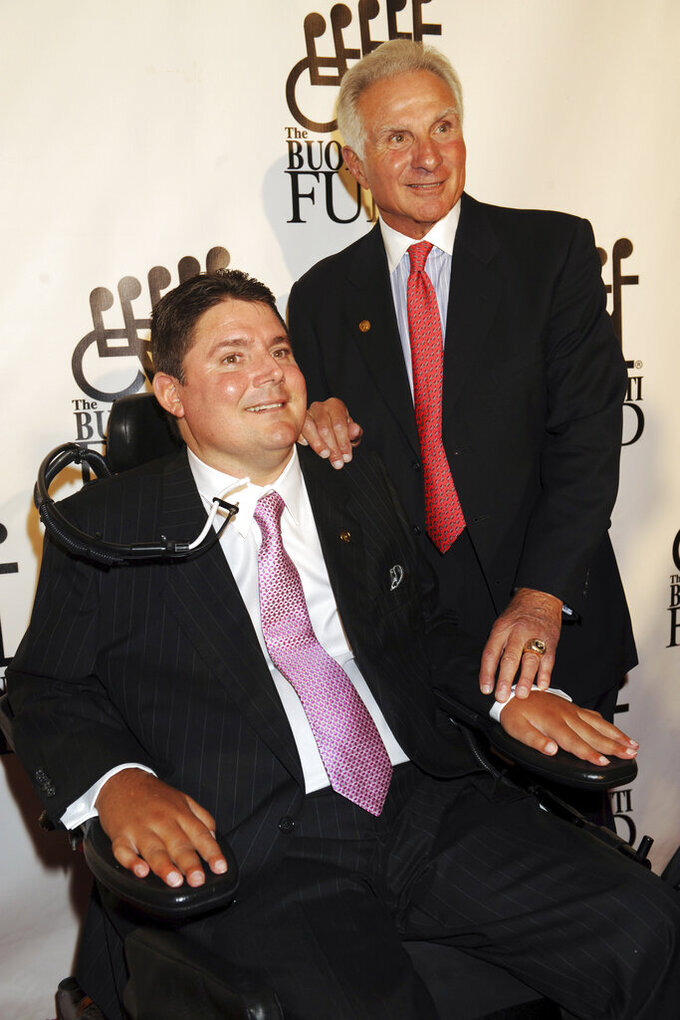 The night really will be dedicated to the late Nick Buoniconti.

Buoniconti, who passed away in July, devoted the last 34 years of his life to finding a cure for people affected by spinal cord injury after his son, Marc, was paralyzed after making a tackle in a 195 game for The Citadel. So while Nick Buoniconti is remembered as a Hall of Fame linebacker and leader of the "No Name Defense" that helped the Miami Dolphins win two Super Bowls, his legacy is the foundation and the Great Sports Legends Dinner that has honored more than 350 sports legends and humanitarians and has raised more than $123 million.

The Buoniconti Fund: The Miami Project to Cure Paralysis, a Center of Excellence at the University of Miami Miller School of Medicine, is considered the premier investigative research program conducting cutting-edge discovery, translational, and clinical investigations targeting spinal cord and brain injuries. The Miami Project's international team includes more than 200 scientists, researchers, clinicians, and support staff who take innovative approaches to the challenges of spinal cord and brain injuries.

"The dinner is going to be a celebration of the life and legacy of Nick," Marc Buoniconti says. "Along with honoring the eight legends, some of our success stories will be highlighted.

"It is hard to imagine based on all he accomplished in his life — his Hall of Fame career was one thing, but to go on and become a lawyer, a business man and president of a Fortune 500 company (U.S. Tobacco), and to broadcast for 24 years on HBO — and just when he might be thinking about retirement and resting on his laurels and his accomplishments, my injury happened. And his real true colors came to life. He had always faced challenges and always would rise above it and he conquered those challenges, and this was the ultimate challenge.

"He gave up many years of his life and basically his career; he ended up choosing the Miami Project over his own ambition."

Marc recalls how his father "adopted millions of sons and daughters in wheelchairs that he would never meet. He felt for the people in wheelchairs and they needed a warrior for them and he was that warrior."

As part of its Huddle for 100 Initiative, the NFL will include its Crucial Catch program to fight cancer.

The goal of the Huddle for 100 is to inspire one million people to volunteer 100 minutes of their time. The NFL is hosting a series of "national huddles" that are tied to various league events or initiatives throughout the year, including at the draft in April, the Pro Football Hall of Fame inductions in August, and the season's kickoff in September.

On Tuesday in the Los Angeles area, the league will stage Huddle to Intercept Cancer at the home of the Chargers, who later that week will host Pittsburgh in the Sunday night game.

"Crucial Catch is so important to us and we're honored to help support patients, survivors and caregivers in the Los Angeles area this Tuesday through Huddle for 100," says Anna Isaacson, senior VP of social responsibility at the NFL. "We're also thrilled that through our partnership with American Cancer Society on the Crucial Catch initiative, we've impacted the lives of more than one million people directly, and we're only continuing to support the fight against cancer from here."

This year's Crucial Catch game in Los Angeles will help bring awareness to the unique circumstances of patients, caregivers, and survivors and will emphasize the importance of understanding preventative habits and early detection. The event at Dignity Health Sports Park will include an intimate experience for those touched by cancer: The opportunity to enjoy therapeutic activities that bring about a sense of community, while allowing them to focus on their personal wellness.

There will also be a volunteer component, with more than 250 members of the LA community participating in activities that give back to those affected by cancer, while also helping to raise awareness around screenings and risk reduction.

Since 2012, NFL funding has reached more than one million people nationwide with education, navigation and screening reminders. More than $20 million has been raised and donated to ACS through the partnership.

An auction of signed helmets by all 32 NFL starting quarterbacks and former players and held by eBay for Charity raised about $18,000 in support of pediatric cancer research and treatment.

A helmet signed by the Saints' Drew Brees drew a top bid of $1,700 during the auction from Sept. 22-29 on eBay to benefit the Starr Children's Fund.

A helmet signed by the Patriots' Tom Brady earned a $1,400 bid, while an Aaron Rodgers-autographed helmet added $1,175 to the grand total. A $620 bid won the helmet signed by Pro Football Hall of Famer Brett Favre.

The late Bart Starr and his wife, Cherry, started the Starr Children's Fund in collaboration with the Vince Lombardi Cancer Foundation in 2017.

"Bart and my hope was to see our country's precious children and their families receive child specific medical treatments and care," Cherry Starr said.

Bart Starr, who died in May at 85, was the MVP of the first two Super Bowls and won league MVP in 1966 with the Packers. Starr was inducted into the Pro Football Hall of Fame and the Packers Hall of Fame in 1977.

Any plans to bench the Denver Broncos' grabby left tackle Garett Bolles are on, well, hold.

The 2017 first-rounder hasn't been whistled for holding since his four-foul fiasco against the Bears in Week 2, which gave him five flags this season and 34 in 34 career games.

After Bolles complained his reputation for holding was unfair and that officials were picking on him, general manager John Elway asked O-line coach Mike Munchak if Bolles even understood what constituted a holding penalty.

The thought was that Bolles would be benched whenever right tackle Ja'Wuan James returned from a sprained knee — which could happen this weekend — with Elijah Wilkinson moving over to protect Joe Flacco's blindside.

"I think he's bounced back well," coach Vic Fangio said of Bolles. "He obviously hasn't had any called back since then. Like I told you guys back then and pretty much throughout, I believe in the guy. He's just got to become more football oriented. He's had a checkered past in football.

"I think Mike's done a great job with him. I think Mike and he have handled the turmoil of that one game well and gotten over it and hopefully he keeps progressing. I'm sure it's not the last holding penalty he's ever going to get in his career, but I'm very hopeful and optimistic about his future."

Jason Witten was reminded that his first 100-yard game came in the 16th-year tight end's first meeting with Green Bay in his second season with the Dallas Cowboys in 2004. That was pretty much all the prompting the 37-year-old needed.

"That was my first route where I had a double move for a touchdown," said Witten, whose Cowboys host the Packers on Sunday. "Al Harris on a little sting route, 2004, up there. Exactly. Little sting route, backside of slot."

That's when Witten seemed to remember the video that circulated last year of Rams coach Sean McVay showing an uncanny ability to recall specific plays, even going back three years.

"Feel like this is a Sean McVay press conference right now, bringing up these old plays," Witten said with a smile. "Every player has a moment in their career when they say, 'I can play in this league and play in it at a high level.' That was like the first time I really broke out and said, 'OK, you can do it vertically, you can do it intermediately, you can do with smart plays and finding soft spots in zones.'"

Witten was also asked about two dramatic playoff losses to the Packers, including in Green Bay with the infamous Dez Bryant catch that wasn't in the fourth quarter. The Packers won 26-21.

"Fourth-and-8, 525 F Post," Witten said. "He threw the little fade route, 9 stop converted, seen Dez and Tony (Romo) make that play a lot over the course of their career."