With Renfrow ailing, Raiders look to get Waller going again 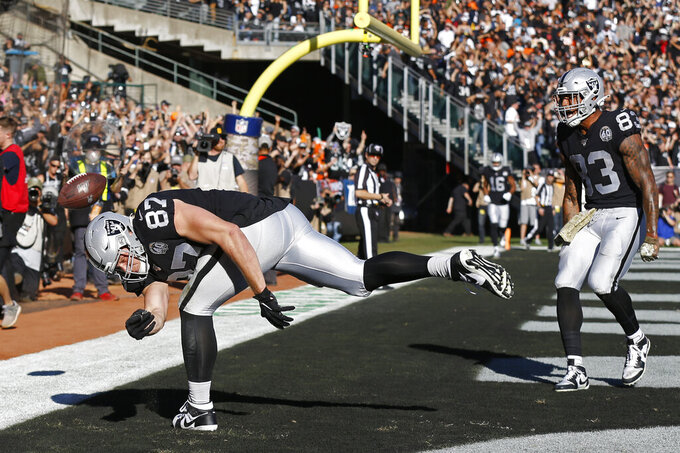 Oakland Raiders tight end Foster Moreau (87) celebrates after scoring a touchdown as tight end Darren Waller (83) looks on during the first half of an NFL football game against the Cincinnati Bengals in Oakland, Calif., Sunday, Nov. 17, 2019. (AP Photo/D. Ross Cameron)

ALAMEDA, Calif. (AP) — As the Oakland Raiders deal with another blow to their wide receiving group following Hunter Renfrow’s injury, tight end Darren Waller hopes he can help pick up the slack.

Waller was one of the NFL’s biggest surprises early in the season and a definite feel-good story after overcoming addiction issues to become the Raiders leader in receptions. But opponents have effectively shut him down over the past month, limiting Waller to 15 catches over the past five games.

“The looks are a lot different and it comes whether I’m in a tight split by myself or in a trips formation,” Waller said Wednesday. “It’s a lot of different stuff that I have to deal with and I’m not used to going up against but as the weeks have gone by, I kind of know what teams (are) trying to take away in certain coverages. It’s a lot more to think about but all the great ones see it too so it’s time to just elevate even more.”

Waller has caught 59 passes this season, tied with Cleveland wide receiver Jarvis Landry for seventh most in the NFL. Only Kansas City’s four-time Pro Bowler Travis Kelce (63) has more catches among tight ends.

However, 44 of Waller’s 59 receptions came in the first six games when he was still a relative unknown factor.

Part of the drop in production has come as a result of quarterback Derek Carr spreading the ball out more than he was previously. And part has been a result of defenses throwing Waller off course, be it with a harder jam at the line of scrimmage or using different coverages.

“We’ve made an effort to use all five eligibles,” Raiders coach Jon Gruden said. “When you’re a good player like Waller is you become a primary target for defenses to try to stop. It’s not real hard to disrupt a tight end on the line of scrimmage or play zone coverage or do something to try to slow him down. But he’s still statistically getting things done and making a big impact on the game.”

Carr said opponents are defending Waller much as they did former Raiders tight end Jared Cook, who caught 122 passes from 2018-19 before signing with New Orleans as a free agent this past offseason.

“I think a lot of our production came from people trying to double and triple team (Waller),” Carr said. “He kind of reminds me of how people started playing Cookie last year and the years prior when I had a good tight end and loved to feature him. There is different ways to get him involved, but I will say if teams do want to put two guys on him, that does open the door for somebody else.”

The Raiders are likely to lean on Waller more Sunday in Kansas City as Oakland tries to make up for the loss of Renfrow.

Renfrow, who is second on the team with 36 receptions, suffered a rib injury during last week’s loss to the New York Jets. He has already been ruled out for the Chiefs game and Gruden was non-committal when asked if Renfrow will play again this season.

“I don’t know,” Gruden said. “Right now we’re listing him as week to week. We’re not going to mess around with the rib-lung area. Right now he won’t play against the Chiefs. I know he wants to play. He feels good. But until we get the green light from the training staff he won’t play.”

NOTES: Because of heavy rains in the Bay Area, the Raiders moved their practice to an indoor facility in Alameda. “We got a lot of reps, a lot of teaching done,” Gruden said. ... Wide receiver Rico Gafford was promoted from the practice squad. Center Erik Magnuson was released to make room on the 53-man roster.