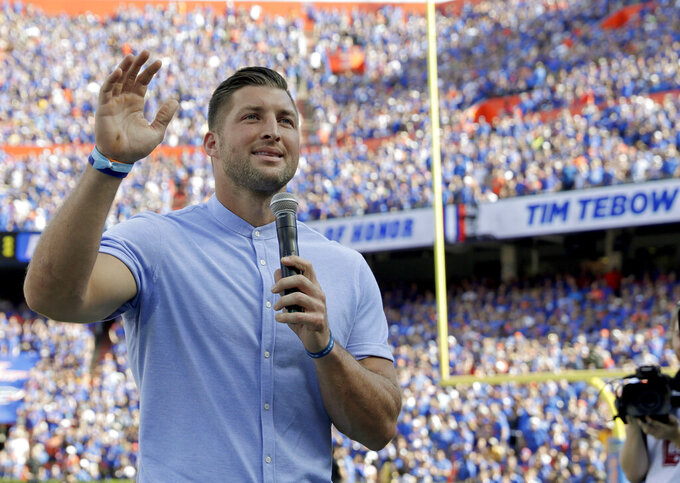 FILE - Former Florida football player Tim Tebow speaks to fans after he was inducted in the Ring of Honor at Florida Field during the first half of an NCAA college football game against LSU in Gainesville, Fla., in this Saturday, Oct. 6, 2018, file photo. Tebow and Urban Meyer are apparently getting back together, this time in the NFL. The former Florida star and 2007 Heisman Trophy-winning quarterback is expected to team up with his college coach by signing a one-year contract to play for the Jacksonville Jaguars, the NFL Network reported Monday, May 10, 2021. (AP Photo/John Raoux, File)

Tim Tebow and Urban Meyer are apparently getting back together, this time in the NFL.

The former Florida star and 2007 Heisman Trophy-winning quarterback is expected to team up with his college coach by signing a one-year contract to play for the Jacksonville Jaguars, the NFL Network reported Monday.

The league-owned network said the deal "could be official in the next week or so."

The 33-year-old Tebow would be returning to the NFL after four years (2016-19) in the New York Mets’ organization and he’d be playing for Meyer for the first time since his senior year in 2009.

This reunion would come with a twist, though.

Tebow would be joining the Jaguars as a tight end. He switched positions after retiring from baseball in February. He worked out for Jacksonville a week later.

Meyer and general manager Trent Baalke are seemingly waiting until after this weekend's rookie minicamp to get the deal done.

Tebow, who grew up in Jacksonville, could fill a huge hole with his hometown team. The Jaguars decided not to pick up a team option in veteran Tyler Eifert’s contract and traded oft-injured 2019 draft pick Josh Oliver to Baltimore. They signed run-blocking specialist Chris Manhertz in free agency, brought back James O’Shaughnessy and drafted Ohio State’s Luke Farrell in the fifth round.

Those were considered minor moves after Meyer vowed to completely revamp the position group. Tebow, at the very least, would provide a splash.

“That will be interesting to see how that contributes to us on offense,” Jaguars co-owner Tony Khan said recently. “Obviously Urban knows Tim really well, and Tim’s got a great history of winning. Urban really believes he can help us, and I think it makes a lot of sense. And it’s a position where we need to get better.”

But how much can a guy on the wrong side of 30 who’s never played the position bring to the team? Tebow’s value could mean as much off the field as on it.

Tebow played quarterback for Meyer between 2006 and 2009, helping the Gators win two national championships while becoming one of the most recognizable — and polarizing — athletes in college sports.

He was a first-round draft pick by Denver in 2010, but his long windup led to a short NFL career. He spent time with the Broncos, the New York Jets, New England and Philadelphia. His last NFL game came with the Jets in 2012.

They cut him in April 2013, three months after then-Jaguars general manager Dave Caldwell famously said he wouldn’t sign Tebow “even if he’s released.”

Tebow has received rock-star media coverage at every NFL stop and might get as much attention in Jacksonville as franchise quarterback Trevor Lawrence, the top pick in the 2021 draft.

Tebow won a playoff game with Denver in 2012, but never developed into a consistent NFL starter. He declined several suggested moves to tight end — he even asked Meyer for guidance — and then ended up switching sports and joining the Mets.

“When he was a quarterback in the NFL, that was a big topic,” Meyer said at the end of the draft. “I was so busy I couldn’t give him the time. ‘What do you think? What do you think?’ And I didn’t know. I was too busy to even think it through.

“I know playing a position in the NFL without (experience), that’s a long shot. This was years ago.”

But when Tebow asked about an NFL comeback in February, Meyer invited him to the facility for a workout. Meyer made it clear he didn’t feel like he owed Tebow anything, either.

“I have one job and that is to win games with the Jacksonville Jaguars,” Meyer said. “If Tim Tebow or Travis Etienne can help us win, then that’s my job to get them ready to go play.”