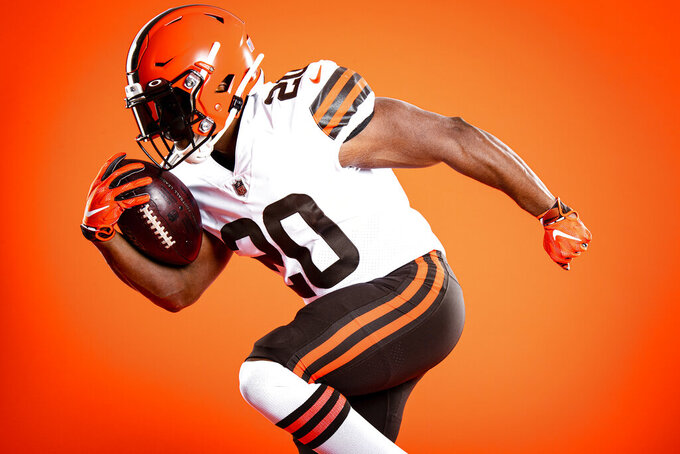 This photo provided by the Cleveland Browns shows the NFL football teams' new uniforms. With a salute to their storied past, the Browns unveiled new uniforms Wednesday, April 15, 2020, to replace old ones that had grown stale and become symbolic with losing. (Matt Starkey/Cleveland Browns via AP) 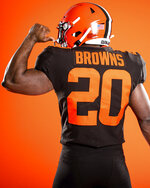 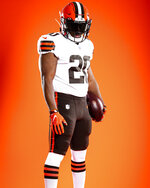 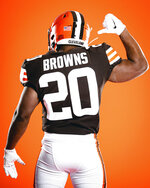 CLEVELAND (AP) — The Cleveland Browns will look better next season. There's still no guarantees how they'll play or when.

With a salute to their storied past, the Browns unveiled new uniforms Wednesday to replace old ones that had grown stale and become symbolic with losing.

The “new” jerseys and pants were inspired by Cleveland's championship teams following the team's birth in the All-America Football Conference in the 1940s and NFL title squads from the 1950s, 60s and 70s. The updated look is also a nod to the Browns' memorable runs in the late 1980s, when they came close to making their first Super Bowl.

“We wanted to get back to the roots of who the Browns are,” executive vice president and owner JW Johnson said. “We’ve heard it from our fans and from our players. We needed to get back to our roots. As you look at iconic franchises like the Browns, the Bears, the Packers, the Cowboys — they’re true to who they are. They’re not doing a lot of changes and trying to make a lot of flashy moves with their uniforms. I think when we went through the process, it just felt right that we got back to who we are and who we’ll always be.”

The team's freshened look features brown jerseys with white numbers and white jerseys with brown numbers. Both will be worn with brown or white pants that have a brown stripe sandwiched by two orange stripes running down the side. They've eliminated orange pants.

The team’s popular color rush jerseys, which the team started in 2018 and became their primary look last season, have been slightly modified with the removal of stripes on the jerseys and pants.

“Our uniforms have always been iconic. They’ve always been classic," Johnson said. "They will forever be iconic and classic now with what we’ve launched and how we feel about them.”

The pants replace ones that said “BROWNS” down the side and were wildly unpopular when the Browns first broke them out in 2015.

The Browns' iconic orange helmet will remain the only one in the NFL without a logo, but it is getting a minor tweak. The helmet will continue to feature a brown face mask, but will no longer include carbon fiber texture in the striping.

Stitched inside the collar of every jersey is “1946,” the year the team was founded.

The team's plans to unveil the uniforms were affected by the COVID-19 outbreak. Instead of a splashy unveiling like they had the previous time they changed their look, the Browns sent out a video containing footage from some of their glory years with shots of stars such as Jim Brown, Bernie Kosar and Clay Matthews.

Earlier this week, the Browns said they'll donate net proceeds from sales of the new jerseys to the "Hats Off To Our Heroes” fund, which will aid health care professionals, first responders, educational professionals and groups affected by the virus outbreak.

The Browns worked closely with Nike on the return to a more classic look, a process that began in 2017. The team considered a number of concepts before settling on one it hopes satisfies its passionate fan base.

“We just felt like getting back to our roots and going back to who we are and who we’ll always be is a reason why we made this change,” Johnson said. “We hope that our fans, alumni and players, who are obviously really excited about it, will be happy with the direction where we went.”