Return trip: Browns going back to rowdy KC for '21 opener 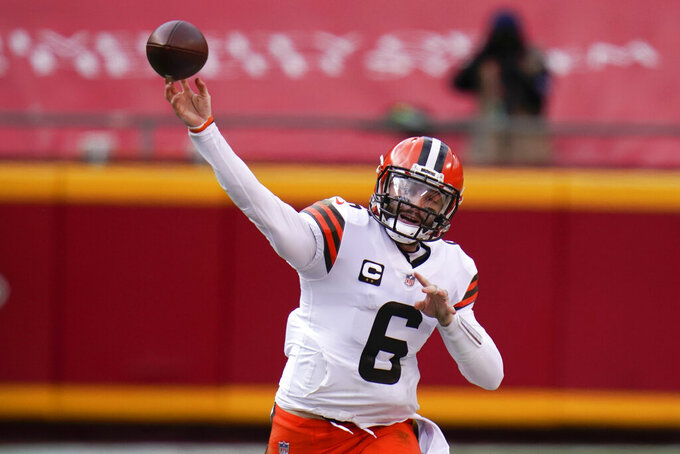 FILE - In this Jan. 17, 2021, file photo, Cleveland Browns quarterback Baker Mayfield (6) throws a pass during the first half an NFL divisional playoff football game against the Kansas City Chiefs in Kansas City. The Browns are on their way back to Kansas City's rowdy Arrowhead Stadium, where Cleveland's 2020 season ended with a gut-punching playoff loss and where its 2021 season, one with Super Bowl hopes, starts. (AP Photo/Jeff Roberson)

This week's destination won't be so serene.

The Browns are on their way back to Kansas City's rowdy Arrowhead Stadium, where Cleveland's 2020 season ended with a divisional-round playoff loss and where its 2021 season — one with Super Bowl hopes — starts.

“I can only imagine how loud it’s going to be,” Mayfield said.

It's an imposing opener for the Browns, who went toe to toe with the two-time defending AFC champions on Jan. 17 before falling 22-17 in a game that wasn't decided until Chiefs backup quarterback Chad Henne converted a fourth-down pass to Tyreek Hill with just over a minute left.

As they've tried to look forward, the Browns have been forced to relive a loss that lingers and also provided offseason motivation.

“I just hold onto the feeling of how I felt, and the team did the same thing after that game," said running back Nick Chubb, who felt he could have done more. "We knew how we felt and we didn't want to experience it anymore. Overall it was a great learning experience for us.”

The Browns aren't viewing this season opener as a chance for payback as much as a first step toward their ultimate goal.

After ending what had been the NFL's longest playoff drought and then winning a postseason game for the first time since 1994, the Browns are legitimate contenders to win it all.

They've been lumped with the Bills, Titans, Colts and Dolphins as teams considered capable of dethroning the Chiefs, who are seeking their third straight conference crown.

“The gold standard,” Mayfield said when asked about facing Kansas City in Week 1. “They’ve been the top of the top in the AFC for the past decade or so. They’re highly competitive, so it’s good for us to play somebody like that.”

Chiefs quarterback Patrick Mahomes, his profusion of playmakers and an underrated KC defense will provide an early measuring stick for the Browns.

Cleveland recovered from a 38-6 thumping by Baltimore in the 2020 opener to go 11-5 and earn a wild-card berth. Then, after upsetting Pittsburgh on the road, the Browns were in position to dethrone Kansas City.

But a sluggish start, a fumble by wide receiver Rashard Higgins at the goal line and the inability to stop the 36-year-old Henne, who had replaced an injured Mahomes, doomed the Browns.

Mayfield said the sting of that loss fueled him.

“That's always something that’s always in the back of your mind,” he said. "It's the last time you stepped on the field for real and just knowing that you win that game, you’re in the conference championship and the next game’s the Super Bowl.

Along with the Chiefs, and all the problems they create with the inimitable Mahomes, Hill's blazing speed and tight end Travis Kelce's knack for big plays, the Arrowhead din can unglue teams.

The Browns have been blasting artificial crowd noise during their practices for two weeks. But nothing can replicate taking the field at Arrowhead.

Mayfield said preparation will be key to managing in the angry red sea of spectators.

“We have to know our game plan inside and out to where if a guy does not hear complete calls, they know exactly where to fill in the pieces,” he said. "We just have to be great at communication, getting lined up quick to where we have to change or fix something and we can do it efficiently.

"It is not like we are going to be shocked by the environment. We know exactly what we are stepping into. We just have to do our job.”

And this time, the Browns want to finish it.

NOTES: DE Jadeveon Clowney missed practice with an illness. Coach Kevin Stefanski said Clowney tested negative for COVID-19 and hopes he returns Thursday. Cleveland signed the 2014 No. 1 overall pick as a free agent to pair him with All-Pro Myles Garrett. ... Rookie CB Greg Newsome said he was told Tuesday that he'll start his first NFL game — against Mahomes and the Chiefs. “What a way to start off your rookie season,” he said. "Definitely super excited to have the opportunity to play a team like that.”