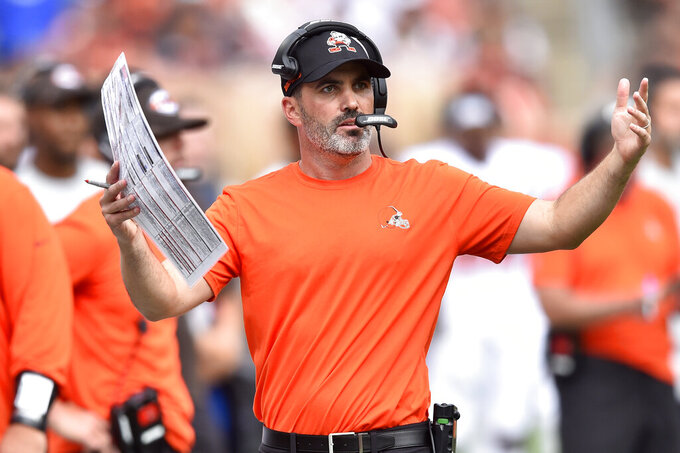 BEREA, Ohio (AP) — Kevin Stefanski won't be swinging through any old neighborhoods or dining at a favorite restaurant when he returns to Minnesota — his NFL home for 14 seasons — this weekend. Those will have to happen another time.

While Stefanski isn't being outwardly sentimental about his homecoming against the Vikings on Sunday, the return is bound to be an emotional one for the NFL's reigning Coach of the Year.

Stefanski's going back to where he got his start as an administrative assistant under coach Brad Childress in 2006. It's where his three children were born and where his impact still resonates in the Vikings' locker room.

“Once my coach, always my coach,” Vikings running back Dalvin Cook said of Stefanski. “My coach for life.”

Stefanski is in Cleveland, but if not for some circumstances, he could still be in Minnesota — perhaps leading the Vikings.

The 39-year-old was a highly coveted offensive coordinator in 2019 when the Browns interviewed him before hiring Freddie Kitchens, who barely made it through one calamitous season. Cleveland didn't pass on its second chance to get Stefanski, who not only steered the Browns through an unusual 2020 season but led them back to the playoffs and to their first postseason win since 1994.

“I firmly believe that things worked out the way they should,” Stefanski said, adding his time in Minnesota prepared him well. "I would speak to my whole time there was very impactful. It is a really well-run organization from top to bottom.”

There was a time when Stefanski was at the bottom. That's where he started with the Vikings, doing whatever was asked.

“Anything and everything,” he said, describing his daily tasks. “You name it.”

He worked his way up the coaching ladder, serving as an assistant with Minnesota's quarterbacks, tight ends and running backs before taking over as interim offensive coordinator for the final three games of 2018.

“You could see that he was going places, he knew football,” said Cousins. “He was a good communicator and so I was really excited when I signed in free agency that he was going to be my quarterback coach. That was a huge plus of me coming to Minnesota.”

Stefanski's relationship with Cousins is one of many strong bonds he formed while working with the Vikings. Stefanski became close with current Minnesota offensive coordinator Klint Kubiak as well as his father, Gary Kubiak, a longtime coach who served as an adviser before retiring in January.

Those close ties are temporarily suspended.

“Obviously, this week nobody is talking to anybody,” Stefanski said, smiling.

Stefanski's innate knowledge of the Vikings would seem to give the Browns an advantage heading into this week's game. However, they know him just as well and the teams mirror each other in so many ways.

Stefanski was asked if he feels the need to be more creative because of the familiarity on both sides.

Some of that is because of Zimmer's influence on Stefanski. They spent five years together, and Stefanski said more than a little of the Minnesota coach, known for his candor and cursing, rubbed off.

“The way he runs his operation is very similar to the way we do things here,” he said. "Coach Zim is very, very transparent and very blunt with the players and coaches, you know where you stand.

"I owe him a great debt of gratitude for how he, No. 1, retained me on the staff when he came in, and then moved me through the offensive staff and made me a coordinator. He's somebody who was very instrumental in my development.”

It would be understandable if there are some divided loyalties in the Stefanski household this week. But although they have fond memories of Minnesota — “a special place” — and there may be a substantial pile of purple-and-gold clothing stashed in a closet at home, Stefanski didn't hesitate when asked who his kids will be rooting for.

"The Brownies,” he said.

NOTES: DE Myles Garrett is the AFC Defensive Player of the Week after setting a franchise record with 4 1/2 sacks against the Bears. ... The Browns placed practice squad DB Tim Harris on the COVID-19 list. ... WR Odell Beckham Jr. was limited in practice with a shoulder issue. He said it popped out Sunday during his first game since October.