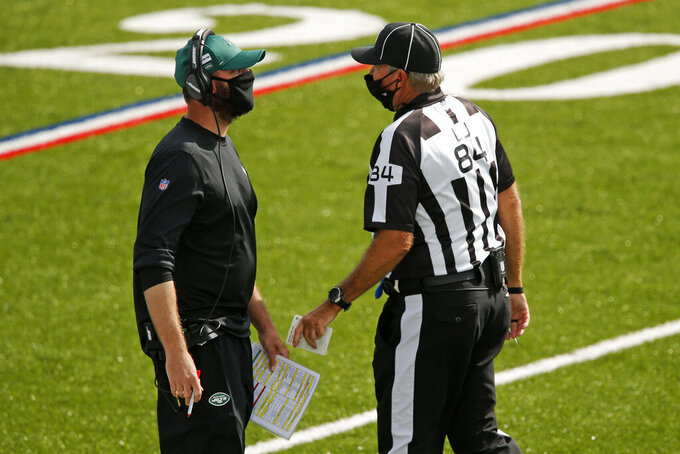 SEATTLE (AP) — It’s something Pete Carroll has done throughout his coaching career. When one of his players is about to face a former team, the Seattle Seahawks coach makes sure to have a brief conversation the week of.

It’s Jamal Adams’ turn to have a conversation with his former team, the New York Jets, set to visit the Seahawks this Sunday.

“It’s a big deal to guys. It’s always a big deal when you go back home,” Carroll said. “I think the first thing is to acknowledge that it is a big deal, and then to realize that you don’t want to let that factor into your ability to focus, and concentrate and do your job and all that.”

Adams was once a key part of the Jets’ future core, but a public divorce landed him in Seattle over the summer after the Seahawks were willing to part with a pair of future first-round picks. It was a steep price paid by Seattle, but what was needed to get Adams out of the Big Apple.

Jets coach Adam Gase said he believed his relationship with Adams was fine, and that the trade appears to have worked out for both sides. But Adams is clearly in a more desirable situation with the Seahawks in the playoff race and the Jets (0-12) wallowed in a winless season, including last week's late loss to Las Vegas.

“I thought it was good, but obviously he felt different. I never had any poor interactions with him. He was somebody I talked to a lot and communicated with,” Gase said. “Once the offseason hit, there was nothing I could do. I’m not in charge of contracts. I’m not involved in those talks. That’s kind of where his agent and the front office guys got to go to work.”

On the field, Adams’ move to Seattle (8-4) has seen mixed results heading into the final four games of the regular season. Adams hasn’t been at his best in pass coverage. But as a run stopper and specifically a pass-rushing blitzer, the Seahawks are getting full value out of the 2019 All-Pro. Adams’ 7 ½ sacks are the second most by a defensive back in any season since the sack became an official stat in 1982. He leads the Seahawks in the category and is tied for 11th leaguewide.

The Jets are fully aware of what their former teammate can do.

“Obviously, Jamal presents a challenge for everyone - for our tight ends, our receivers, our line, myself, our running backs,” Jets quarterback Sam Darnold said. “He’s a really, really good player, physical player, super smart as well. So, we’ve got our hands full there and we’re excited to obviously not just face him but face a really good Seattle defense.”

Seattle will be trying to rebound from last week’s shocking 17-12 loss to the New York Giants that likely cost the Seahawks any chance at landing the No. 1 seed in the NFC. It also dropped Seattle into a tie with the Rams in the NFC West. With a Week 16 matchup at home against the Rams looming, the Seahawks can’t afford any other stumbles.

Bush has served as Adam Gase’s assistant head coach and inside linebackers coach the past two seasons. The former NFL linebacker has been an assistant for several teams over the last 27 years, and has also been a defensive coordinator during the 2009-10 seasons for Houston.

Bush takes over a unit that ranked 29th in total defense under Williams, and 31st against the pass. Bush will have his hands full this week preparing for the Seahawks’ Russell Wilson-led offense.

Last week was Wilson’s shakiest game of the season. He struggled in Week 10 against the Rams, a team that has long caused Wilson and the Seahawks problems. But Wilson appeared a step behind in his decision making against the Giants. Wilson seemed hesitant to let throws go and at other times held the ball too long, taking costly sacks.

“I came out of the game feeling like the guys protected well and we needed to get more production out of our opportunities; we really had chances,” Carroll said.

It didn’t help Wilson that Seattle’s balance was heavily tilted toward the pass. Seattle had just 15 runs from its running backs against the Giants, with 43 pass attempts by Wilson.

Darnold led the Jets on an opening 12-play, 74-yard drive that was capped with a 3-yard touchdown toss to Jamison Crowder against Las Vegas. It was the struggling quarterback’s first TD pass since Week 3. It also marked the sixth straight game the Jets scored on their opening drive — the longest active streak in the NFL — with two TDs and four field goals.

Darnold finished with two touchdown passes and a TD run, but also threw an interception and lost two fumbles – with two of the turnovers leading to 10 points for the Raiders. The third-year quarterback has nine INTs and two lost fumbles this season.