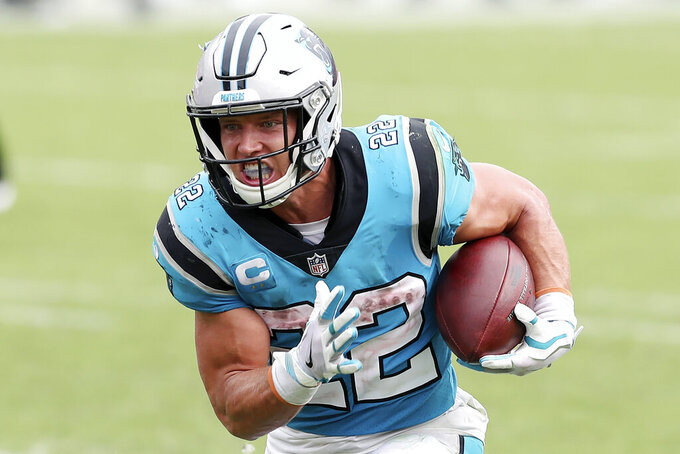 Carolina Panthers running back Christian McCaffrey (22) rushes for a touchdown against the Tampa Bay Buccaneers during the second half of an NFL football game Sunday, Sept. 20, 2020, in Tampa, Fla. The Panthers are eager to get Christian McCaffrey back on the field after he has missed four games with a high ankle sprain. (AP Photo/Mark LoMoglio)

“It’s sort of out of my hands, but I am hopeful we will have him,” Rhule said, adding that the decision is largely up to the team’s training staff.

McCaffrey was back on the practice field Monday wearing a red jersey signifying an injured player and he remains on the team’s injured reserve list for now. He did not practice, working instead with the training staff.

The 2019 All-Pro running back has missed the past five games with a high ankle sprain.

He was off to a solid start with 223 yards from scrimmage and four touchdowns in the first two games. He left a Week 2 loss to the Buccaneers in the fourth quarter and hasn't practiced since.

The Panthers (3-4) are in need of a win to stay in the thick of the NFC South race, so they could certainly use McCaffrey.

While there is some conventional thinking that the team might err on the side of caution and hold him out Thursday, thus giving him another 10 days to allow him to recover, Rhule seemed to put that notion to rest, saying “if you know Christian, he wants to play. As soon as he is ready to go he will go.”

“That would be exciting to see Christian back out there if he is ready to go,” quarterback Teddy Bridgewater said. “He's been working extremely hard and I know he's itching to get back out there.”

Carolina defeated the Falcons in Atlanta 23-16 three weeks ago without McCaffrey. McCaffrey's backup Mike Davis had a big game in the previous matchup, rushing for 89 yards on 16 carries and catching nine passes for 60 yards and a touchdown.