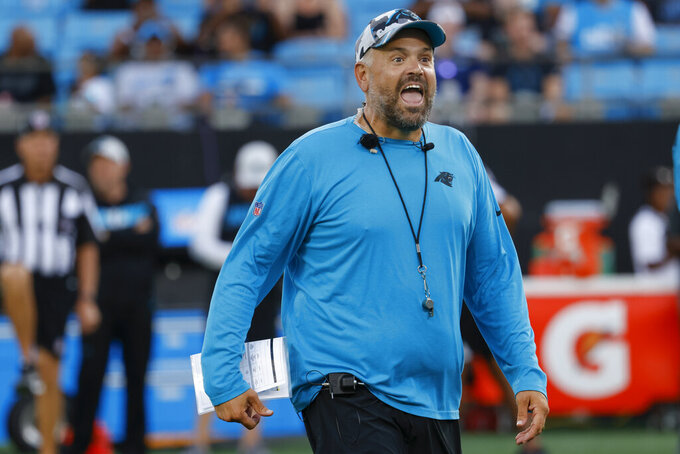 CHARLOTTE, N.C. (AP) — Baker Mayfield and Sam Darnold will each play one series Saturday night when the Carolina Panthers face the Washington Commanders in their preseason opener, according to coach Matt Rhule.

Rhule would not say who’ll start at quarterback.

“We are trying to get each guy six to eight plays,” Rhule said following the team’s annual Fan Fest practice Thursday night at Bank of America Stadium.

Rookie Matt Corral and P.J. Walker are expected to see most of the reps at quarterback.

Rhule said most of the team’s starters will play between eight and 15 plays.

Mayfield and Darnold have been competing for the starting job since the start of training camp and splitting reps in practice.

The Panthers aren't expected to choose a starter for the Sept. 11 regular season opener against the Cleveland Browns until after the second preseason game because he doesn't want to rushing into making the wrong choice.

Mayfield has been more productive in practice, but Rhule hasn't given any indication as to who is winning the quarterback battle in his mind, saying that both Mayfield and Darnold have had good days.

"When we know, we know,” Rhule said. “If we knew it, we would say. Every day bring new evidence; every day brings new insights.”

If past accomplishments are any indication, Mayfield would appear to have the upper hand.

The No. 1 overall pick in 2018 was 29-30 as a starter in his four seasons with the Browns, while Darnold is just 17-32 in his time with the New York Jets and Panthers. Mayfield also has playoff experience, leading the Browns to wild card win in 2020 after helping Cleveland finish 11-5 in the regular season.

“To me this is about being a great situational quarterback in the red zone, on third down and in the two-minute offense," Rhule said. "And then it's seeing who can move the team, who can make plays, who can play within the scheme and get the ball to the guys that we have.

“When you have those three things, you have the starting quarterback,” he added.

NOTES: The Panthers signed tight ends Ryan Izzo and Nate Becker on Thursday following a spate of injuries at the position. The Panthers waived sent defensive end Jacob Tuioti-Mariner to injured reserve and waived-injured cornerback Devin Jones in corresponding moves. ... Defensive tackle Derrick Brown was excused from practice Thursday because of personal reasons. ... Linebacker Shaq Thompson and cornerback Jaycee Horn will not play against the Commanders.