Rivera says Commanders are still learning how to practice 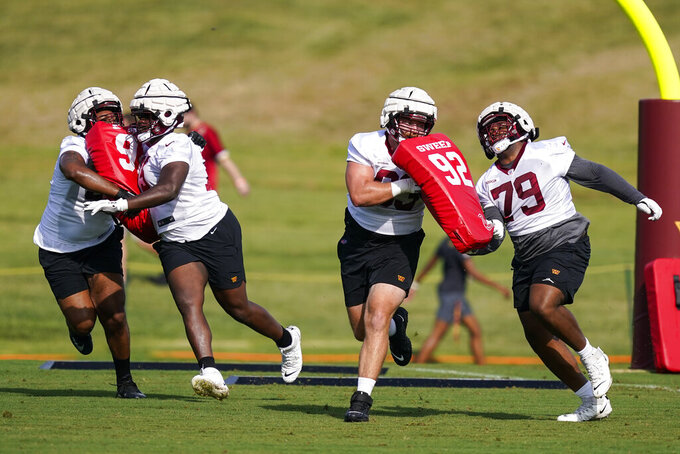 The veteran coach just wants it to turn into something useful.

Following the second practice of camp that was full of barbs mostly from the defense, Rivera thinks his young team is still figuring out how to handle those moments. He sees it as another stage in the maturation process, which is happening in the aftermath of getting fined $100,000 and the team being stripped of two offseason workouts next year for excessive contact on the field during the spring.

Rivera, who’s in his third season with Washington after coaching the Carolina Panthers for nine years, believes he has evolved with NFL rules that limit practice time and have made hard-hitting two-a-days a thing of the past.

“Going through this process, learning how to adapt and adjust, I’d like to believe we’ve done it right,” Rivera said. “Granted. I got in trouble in the spring, but it took 12 years for me to get in trouble, I guess, so I think I’d like to say that I adapted for the most part doing the things that we need to do.”

Rivera was incensed by one particular hit during organized team activities June 8 to the point he stopped practice to lecture his team. Safety Jeremy Reaves made significant contact with second-year receiver Dyami Brown during practice without pads. While Rivera disagreed with the league’s assessment, he continually reminds players about maters of safety during practice.

“Sometimes things happen,” he said. “Guys run into each other. I try to make a point of it. I try to emphasize it during OTAs and minicamp that we’re supposed to keep our heads out of it.”

Contact wasn’t an issue Thursday, though it’s not difficult to imagine some of the trash-talking escalating in the coming weeks when players put the pads on and the physicality increases. Players didn’t even stop jawing at each other — mostly playfully — when practice ended.

Rivera is fine with fun as long as things don’t get out of hand. He also cautioned players that this early in camp mismatches are going to happen and to not overreact to big plays.

“I circled them up and told them that,” Rivera said. “I said, ‘Listen guys, understand what I have to balance. I want to see you guys excel, but at the same time we’re not game-planning, so we’ve got to understand how to practice, how to work with each other, how to connect, how to understand what it takes for us all to grow and develop, and that’s the balance.’”

The Commanders activated starting center Chase Roullier off the physically unable to perform list between practice and their afternoon walkthrough Thursday.

Antonio Gandy-Golden, a fourth-round pick in 2020 who was attempting to convert to tight end from wide receiver, told the team he’s retiring from football and plans to return to school.

The move surprised Rivera, who thought the 24-year-old Liberty University product could successfully make the transition and help the offense.

“He was making some pretty good strides,” Rivera said. “He showed his ability, and we felt this was a guy that could’ve been a matchup problem for some people. A little surprised, but I love who he is as a young man and I want to wish him all the best as he goes back and starts the rest of his life.”