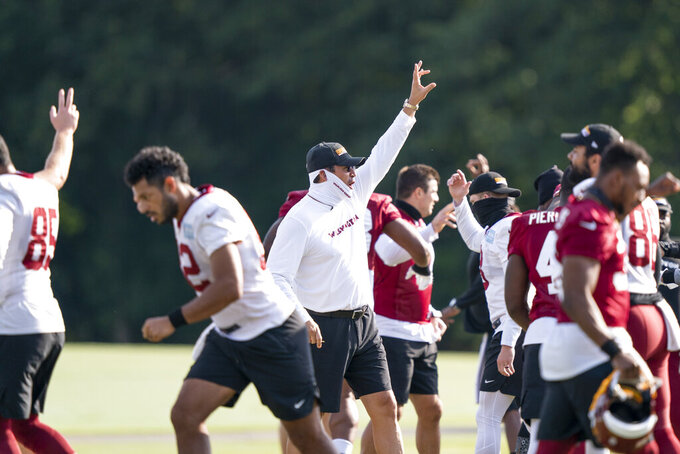 Ron Rivera called his players together to deliver the “tough news" of his cancer diagnosis on Thursday night and by Saturday morning ripped into them for a practice that didn't meet his standards.

Washington's coach knows he'll struggle during treatment for squamous cell carcinoma but doesn't want his health to be a focus. There's a plan B in place for defensive coordinator Jack Del Rio to take over the coaching when necessary, but Rivera got a good prognosis from doctors about making a full recovery. He wants his team to be “business as usual” and concentrate on football.

The 40-hour swing from revealing he had cancer to yelling that practice wasn't good enough exemplified Rivera's desire to get back to work even with the difficult challenge ahead. Doctors told the 58-year-old coaching could take his mind off the chemotherapy procedures needed to get rid of the treatable form of skin cancer.

So that's what he's doing, while hoping it's a bonding and teaching experience for players.

"We’ll find out a lot more about ourselves," said Rivera, who is in his first season with Washington. “Are we going to wait for somebody else to step up, or are we going to step up ourselves? So I think this is all part of our growth.”

In the aftermath of a tongue-lashing from Rivera, players could already appreciate what it showed about his focus on practice, work habits and the expectations he's setting.

“You never like being chewed out on the field, but that just shows the passion that coach Rivera has on the field," starting center Chase Roullier said. "We know that no matter what’s happening with his health, that is what he wants and he’s going to continue to push that every day.”

Veteran linebacker Thomas Davis, who played under Rivera for several seasons with Carolina, figures the seasoned coach will handle cancer treatments with the same aggressiveness he shows on the sideline or the practice field.

“He is going to attack it full steam ahead," Davis said. "I fully expect him to be someone that is not going to come out and complain. He is going to control his inner ape, his attitude, preparation and his effort in recovery. That is something that he preaches to us all the time and that is fully what I expect from him in this situation.”

During a video interview with reporters, Rivera brushed off extra concern about fighting cancer during a pandemic and emphasized that he doesn't want to keep talking about his health. He explained that Del Rio filled an interim role with the Denver Broncos in 2013 when coach John Fox was recovering from heart surgery and is confident things will run smoothly if that's needed this time.

Del Rio also has 12 years of NFL head-coaching experience: nine with the Jaguars and three more with the Raiders. Rivera has already leaned on Del Rio to bounce football ideas off him and might have to rely on him to run the team at some point.

“It just kind of shows you the importance of having that kind of guy around,” Rivera said. "Now with the situation and circumstances we have, his value for us is even more so.”