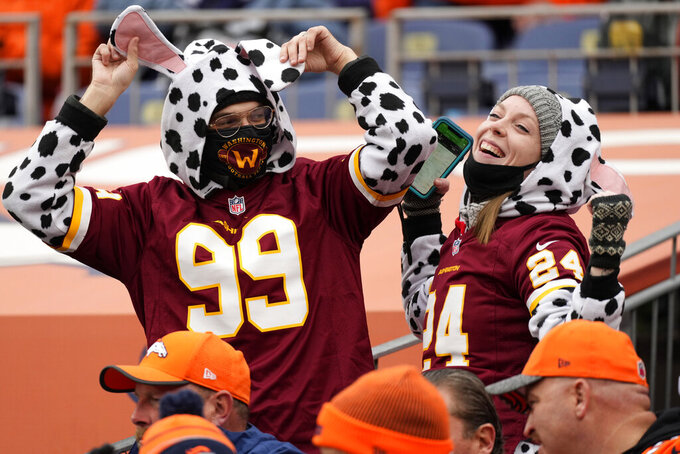 Another close loss was enough to push Washington's season over the edge.

At 2-6 with the defending Super Bowl champion Tampa Bay Buccaneers up next and the Dallas Cowboys in control of the NFC East, Washington's hopes of a long-shot playoff bid seem out of reach. It's all about the future now, and the only suspense over the next few months beyond where the team will draft in the first round is what the franchise's new name will be.

“The truth of matter is it gets darkest before it gets brightest,” coach Ron Rivera said. “We’re going to have to go through this. ... We can do the best we can. We are going to play as hard as we can, and we’ll see what happens. We’re going to show up every Sunday and try and give our best and hopefully win some football games.”

Rivera still wants to win, but the focus has shifted. He said after losing at Denver on Sunday that he and the staff will now re-evaluate every position of a team that is “still trying to search and find ourselves.”

Washington finds itself tied for last in the division, and it'll be harder than last season to go on a run. A soft schedule helped Washington go from 2-7 to 7-9 and the playoffs — and now a first-place schedule with Tom Brady's Buccaneers, Russell Wilson's Seattle Seahawks and Dak Prescott's Cowboys makes it quite the uphill climb.

“Last year's last year,” running back J.D. McKissic said. “We’ve got to focus on this year. Right now, we just got to finish.”

Not finishing is what has Washington in this mess. With Taylor Heinicke at quarterback, the team has the worst red zone offense in the NFL at 45.5%, and the defense that was supposed to be among the league's best ranks 27th.

Rivera is optimistic about getting some players back after the bye week and is eager to see what the team looks like then.

“Some of the things that we’ve done lately have really shown that we have the potential to get it going again,” he said. "But finding who we are has got a lot to do with the guys that we haven’t been able to use and play with, so I think coming out of this, we’ll see how we respond to it."

The responses so far have come up empty. They only beat the Giants on a buzzer-beating field goal after New York's Dexter Lawrence jumped offside on the first attempt that missed and needed two touchdowns in the final four minutes to come back and win at Atlanta.

Rivera wondered aloud Sunday: “Where are we?” And his players made it clear that's still an open question.

“It’s still searching for an identity for our offense,” left tackle Charles Leno said. “Bye week came at the perfect time. Let’s just go ahead and do some self-scout, figure out what we’re good at, figure out what we need to get better at and eliminate the things that we’re bad at and go from there.”

Veteran safety Landon Collins — who has been used mostly as a linebacker this season — said he's “not letting the frustration set in.” That's easier said than done, and how players handle that will go a long way toward determining who's around next season when Washington has a name and greater expectations.

“We’re a young team that’s learning how to mature and that’s what we’re at,” Rivera said. "We’re going to do the best we can to coach them up and we’ll see what happens."