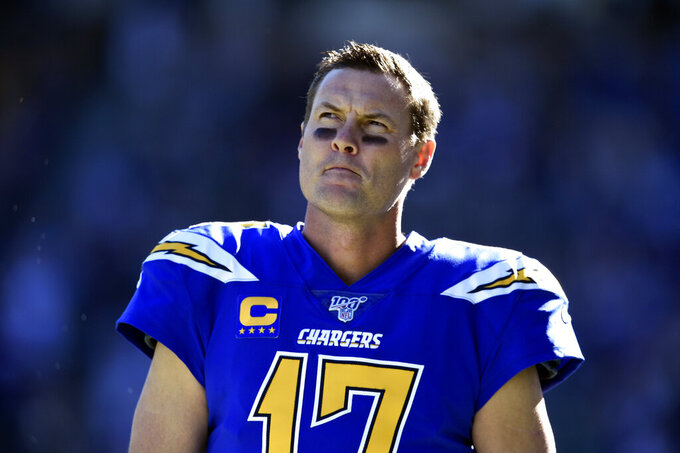 Los Angeles Chargers quarterback Philip Rivers looks on during the first half of an NFL football game against the Minnesota Vikings, Sunday, Dec. 15, 2019, in Carson, Calif. (AP Photo/Kelvin Kuo)

COSTA MESA, Calif. (AP) — Philip Rivers will make his 112th home start on Sunday for the Los Angeles Chargers. Whether it will be his final one wearing powder blue remains to be seen.

Rivers' future with the franchise he has spent all 16 seasons with has generated more conversation after the Chargers (5-9) were eliminated from the postseason. The 38-year old quarterback is in the final year of his contract with both sides saying they will wait until the end of the season before discussing an extension.

The uncertainty is why Rivers hasn't shied away from acknowledging this week's game against the Oakland Raiders could carry some sentimental value.

"I'm just saying emotionally and mentally it is going to run out at some point. Whether it does or doesn't it is OK to acknowledge that."

Rivers is third in the league with 4,055 passing yards, marking the seventh consecutive season he has surpassed 4,000 yards. Despite that, the season has been a disappointment. Rivers has 18 interceptions, which is second in the NFL and tied for his most through 14 games. He has 11 picks in the last five games, including three in a 26-24 loss at Oakland on Nov. 7 and three in last Sunday's 39-10 drubbing by Minnesota.

Rivers' interceptions have also come at the most inopportune times. Nearly half (eight) have come in the fourth quarter. He has also been picked off three times in the red zone.

Coach Anthony Lynn said Rivers did a good job protecting the football the past two seasons but has regressed this year.

Oakland coach Jon Gruden also noted injuries, along with running back Melvin Gordon's holdout earlier in the season and the midseason change at offensive coordinator, as other factors behind Rivers'struggles.

“Everything has a hand in it," Gruden said. “I know he has had some tough games and moments but if you don't like Philip Rivers as your quarterback you have a screw loose if you ask me."

Gordon, who is also in the final year of his contract, said it is weird thinking about neither player being in Los Angeles next season. He said the advice Rivers gave him about trying to enjoy the last couple games and not letting anyone steal his happiness has helped.

“He thinks about it but he doesn't. He is trying to live in the moment," Gordon said.

The Chargers' focus this week is on trying to get their first win in the division and leaving their temporary home in Carson on a positive note. They will move next season into the new stadium at Hollywood Park that they will be sharing with the Rams.

Los Angeles has won four of its last five against Oakland but saw the Raiders (6-8) rally in the fourth quarter for their victory in Week 9.

“I imagine, again, it will be another hard-fought game. We know with that team, that coaching staff and the veterans they have, that it’s going to be two teams fighting," Rivers said. “It won’t look like two teams that are out of it or are disinterested. I think it will be a spirited division contest."

Notes: OT Russell Okung (groin) was the only player who did not practice Wednesday. Lynn said Okung may get limited snaps during individual portions of practice but will be rested for the most part. If Okung doesn't play, Trey Pipkins or Trent Scott would get the start at left tackle.