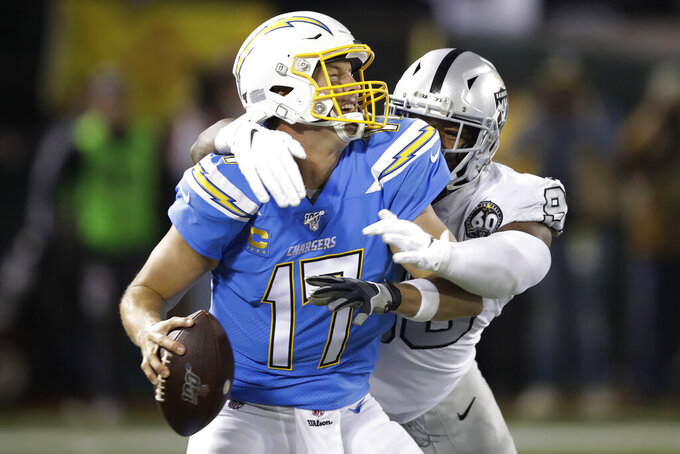 COSTA MESA, Calif. (AP) — The Los Angeles Chargers’ final five regular-season games after their bye this week could go a long way toward determining whether Philip Rivers will return next year.

The franchise quarterback is in the final year of his contract with neither side indicating it’s close to an extension. Rivers has spent his entire 16-year career with the Chargers but is having one of his most frustrating seasons.

“I’m not going to entertain that right now. Right now, Philip Rivers is our starting quarterback,” Lynn said. “You know, we’re sitting here 4-7. Everybody could be doing something better.”

Los Angeles was considered a contender for the AFC West title going into the season but needs to win out and get plenty of help to even entertain getting back to the playoffs. While the Chargers have dealt with their share of injuries, Rivers has also contributed with turnovers and poor decisions.

Rivers threw seven interceptions in Los Angeles’ last two games — losses to the Raiders and Chiefs. It is the first time he has thrown three or more picks in consecutive games. He has thrown 14 this season, which is second in the league, after having only six at the same point last year.

“Not scoring in the red zone and committing turnovers is what gets you beat, and it has been beating us all year,” Rivers said after Monday’s 24-17 loss to Kansas City in Mexico City.

Rivers has also fumbled twice. Of his 16 turnovers, six have resulted in touchdowns and one in a field goal. Four of the interceptions have come on the final drive of the game as all the Chargers’ losses have been by seven points or fewer.

Even when Rivers holds onto the ball, the Chargers are struggling in the red zone. They are tied for second with 40 red-zone possessions, but lead the league with six turnovers inside their opponents’ 20 and are 26th in touchdown percentage (47.5%).

Ken Whisenhunt was replaced by Shane Steichen as offensive coordinator on Oct. 28, but many of the same problems have remained.

“We moved it well, but you have to score touchdowns. I’ve made some poor throws and have given them seven points the last two games,” Rivers said.

Lynn hasn’t singled out Rivers for the turnovers, but Rivers has returned to taking risks with the ball. He has two games with three or more picks in three of the past four seasons. He didn’t have any last season, when Los Angeles was 12-4 and advanced to the divisional round of the playoffs.

Many of the interceptions have come when Rivers threw deep instead of taking what the defense gave him on shorter routes.

“We’ve just got to do a better job making decisions with the football, period,” Lynn said.

Many thought Rivers would be with the Chargers through 2020 and play at least the first season in the new Inglewood stadium they will share with the Rams. But with extension talks being quiet, the future is cloudy. Backup Tyrod Taylor is under contract through 2020, and the Chargers would have the 11th overall pick in the draft if the season ended today.

Rivers isn’t the only offensive skill player who might be going into his final five games with the Chargers. Running back Melvin Gordon is unlikely to be back after holding out for two months and not receiving a contract extension.

Lynn said he is spending most of the bye week evaluating the entire roster as well as his coaching staff. With their record and flickering postseason hopes, Lynn and general manager Tom Telesco are likely starting to look toward the future.