Rivers ready for another big showdown with Jackson, Ravens 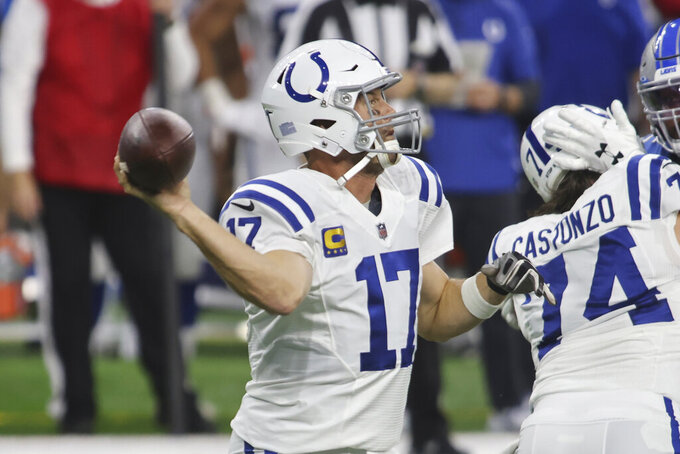 INDIANAPOLIS (AP) — Philip Rivers could write a book about his personal matchups against some of the NFL's best players.

There was the time in 2007 when Brett Favre rallied Green Bay past his San Diego Chargers. There were memorable twice-a-season duels with Peyton Manning as AFC West rivals when Manning left Indianapolis for Denver. And he still hasn't forgotten — or perhaps forgiven — Andrew Luck for throwing that 63-yard TD pass with 77 seconds left to beat the Chargers in 2016.

On Sunday, he could create another memorable chapter when he leads the Indianapolis Colts against reigning MVP Lamar Jackson and the Baltimore Ravens.

“He can play the style I play. His other style I can’t do," Rivers said, drawing laughter. “He certainly is an awesome player. He’s been great for our league. He and a lot of other young quarterbacks, they can throw it and run it, extend plays and make unbelievable runs. It’s been great for the league.”

This matchup between two playoff contenders sporting 5-2 records will be quite different.

Jackson is now an established star, while Rivers is on the cusp of moving past Hall of Famer Dan Marino for fifth in league history in yards passing. Rivers needs 231 yards.

And in this topsy-turvy season, injuries and one positive COVID-19 test have put the Ravens in scramble mode.

2019 All-Pro cornerback Marlon Humphrey has been out since Monday while seven other defensive players missed practice after being deemed close contacts. If they continue to test negative, all seven could be cleared Saturday.

Jackson also hopes to rewrite the narrative after playing one of his poorer games in last week's loss to Pittsburgh. He fumbled three times, lost two, had two interceptions and was sacked four times. It won't get any easier against another stingy defense.

“Darius Leonard, he’s a great linebacker," Jackson said. “He’s one of the best in the game right now. Their defensive line is great. I feel like our guys will do a pretty good job. We just have to go out there, have fun and play football, play great Ravens football."

Either way, Rivers is hoping to celebrate another storybook moment.

At age 38, Rivers is rounding into midseason form. He started his first season with Indy by throwing five interceptions and four touchdown passes in his first five games. The last two weeks, victories over Cincinnati and Detroit, Rivers has completed 52 of 77 with 633 yards, six TDs and one interception. Coach Frank Reich believes there's a good reason for the improvement.

“I think Philip played exceptionally well (Sunday), in numbers and every other thing," Reich said. “When it’s not there — we had a play on the goal line that didn’t come up quite how we wanted — and he said, ‘Let’s just dirt it and let’s just move on and have confidence in the next play call.’ But Philip is a great decision maker."

Each started the season behind incumbent starters and now they could both be starting again this weekend.

Dobbins is coming off his best game as a pro, running 15 times for 113 yards in place of the injured Mark Ingram. With Ingram still dealing with a high ankle sprain, Dobbins could get another hefty workload.

“He's explosive. He’s a shifty guy,” Jackson said. “He’s what you need in a back, and that’s what we have.”

Taylor also is expected to start despite having only one second-half carry last week at Detroit. Reich said Taylor suffered an ankle injury during the game, though he did practice this week.

Baltimore has won won nine straight road games, the league's longest active streak, while the defense has forced a turnover in 20 straight games.