Rivers versus Brady in divisional round of NFL playoffs 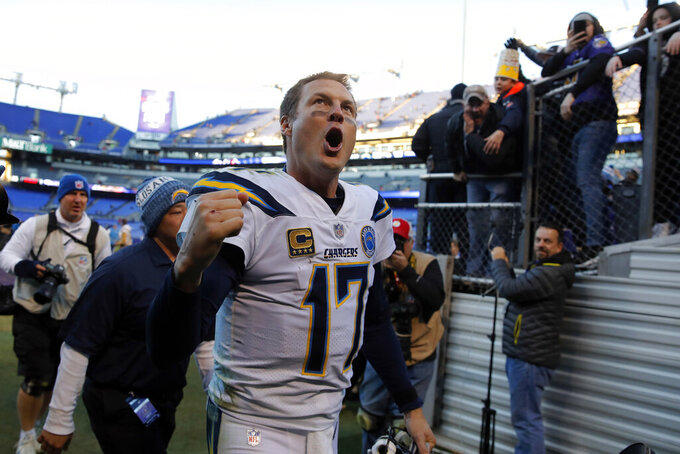 CHICAGO (AP) — Philip Rivers has come up empty against Tom Brady every time.

He gets another shot next weekend.

Rivers directed the Los Angeles Chargers to a 23-17 playoff victory at Baltimore on Sunday, setting up another high-stakes matchup with Brady and the New England Patriots. For all of Rivers' success during his 15 years in the NFL, he is winless in seven career starts against Brady.

"To get an opportunity again to go against them, 11 years after we had the opportunity in the 2007 season, yeah, it's awesome," Rivers said. "Looking forward to it."

The reigning Super Bowl champions are still in the mix after Nick Foles threw a 2-yard touchdown pass to Golden Tate on fourth down with 56 seconds left, sending the Philadelphia Eagles to a 16-15 victory over the NFC North champion Chicago Bears on Sunday.

Cody Parkey had a look at a potential winning field goal for Chicago, but his 43-yard try with 10 seconds remaining went off the left upright and then the crossbar. Parkey bent over after the miss as the Eagles celebrated and Bears coach Matt Nagy looked on in disbelief.

"That's playoff football right there for you," Tate said. "That's why we play this game, for times like now once you get to January and February."

Next up for Foles and Philadelphia (10-7) is a trip to New Orleans to face Drew Brees and the top-seeded Saints (13-3). The Eagles also visited the Big Easy on Nov. 18 and struggled mightily against Brees and company in a 48-7 loss.

The Chargers (13-4) visit the Patriots (11-5) in the first divisional playoff game next Sunday, followed by the Eagles' return to New Orleans. Andrew Luck and the Indianapolis Colts (11-6) take on Patrick Mahomes and the Kansas City Chiefs (12-4) on Saturday, and then Dak Prescott and Ezekiel Elliott lead the Dallas Cowboys (11-6) into Los Angeles to take on Todd Gurley and the Rams (13-3).

Luck threw for 222 yards and a touchdown and Marlon Mack rushed for 148 yards in the Colts' 21-7 victory at Houston on Saturday. Prescott passed for a TD and ran for another score to help the Cowboys top the Seattle Seahawks 24-22 in their first-round matchup.

"It's really just a chance to keep going on, simple as that," Prescott said. "Me and this whole team, we want to win it all. You can't do that without taking care of the first one. A lot of excitement, but my goal is bigger than just one playoff win."

The 37-year-old Rivers beat New England in 2008, but that was with Matt Cassel starting at quarterback for the Patriots while Brady was injured. Rivers went up against New England for the first time in the playoffs after the 2006 season, tossing an interception in a 24-21 loss to the visiting Patriots.

The star QBs also squared off in the postseason in 2008. Playing with a torn knee ligament, Rivers threw two more picks in a 21-12 loss at New England.

"Obviously, we've got to worry about that defense. It's a Bill Belichick-led team and defense," Rivers said. "I'm not playing Tom by any means. But is it special to go to New England against a Hall of Fame coach and arguably the best quarterback ever to play and get another shot at 'em? Heck, yeah. Heck, yeah, it is special."