A-Rob returns in must-win game for Bears, must-lose for Jags 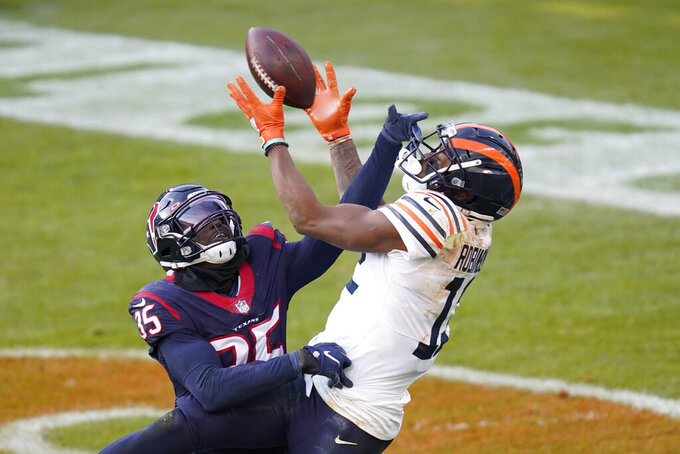 Robinson was the most notable player to leave Jacksonville following its most successful season in nearly two decades. He chose to hit free agency in 2018 instead of re-signing with the team that drafted him 61st overall four years earlier. He landed in Chicago and is one of three NFL players with at least 90 catches and 1,100 yards in each of the past two seasons.

Allowing him to walk — the Jaguars could have placed the franchise tag on him — was one of the front office’s most significant missteps after the team nearly knocked off New England in the AFC championship game.

Jacksonville will get a stark reminder of the error Sunday when Robinson faces his former team for the first time as the skidding Jaguars (1-13) host the playoff-hopeful Bears (7-7). It’s a must-win game for Chicago and essentially a must-lose for Jacksonville.

“I’m excited for sure,” Robinson said. “But I wouldn’t say (it’s) anything significant at all.”

His homecoming could mean more to Jaguars fans eager to see their team falter in its final two games. Jacksonville (1-13) has lost 13 in a row, tying the team record set in 2013, and is now in position to get the No. 1 pick — presumably Clemson quarterback Trevor Lawrence — in the 2021 NFL draft.

Beating the Bears likely would knock the Jags out of the prime position, prompting countless hours of tanking talk in and around Jacksonville this week.

“The fans are kind of lifers,” Jaguars quarterback Mike Glennon said. “A lot of us are on one-year deals. You never know where you’re going to be, so you always have to put your best foot forward. Our focus is on the present, this week, rather than what’s going to happen with the draft.”

The most popular opinion locally and nationally is Jacksonville can’t afford to mess this up after whiffing so often at the all-important quarterback position.

Losing Robinson should have served as a lesson.

Jacksonville spent significant draft capital and more than $35 million in free agency trying to replace him — and still haven't. They used second-round picks on receivers DJ Chark and Laviska Shenault. They re-signed Marqise Lee and ultimately paid him $16.8 million for three catches netting 18 yards. They brought in Donte Moncrief, giving him a one-year deal worth $9.6 million in 2019, and signed Chris Conley.

None of them has been able to truly fill Robinson’s cleats. He has 90 catches for 1,110 yards and six touchdowns this season, helping make the Bears a legitimate playoff contender.

“If you’ve coached them, you want them to do well,” Jaguars coach Doug Marrone said. “You just hope when you’re playing against them, they don’t do as well as they’ve been doing.”

Robinson is generally considered one of the top receivers to ever play in Jacksonville, right up there with Jimmy Smith and Keenan McCardell, and that's without a consistently solid quarterback situation.

“It helped me grow as a player a lot,” Robinson said of his early years. “I think I went through just some adversity. I wouldn’t say a lot of adversity, but going through some adversity as a young player in the league I think helped mold who I am today and how I approach things.”

Marrone opened up Jacksonville’s starting QB job this week, saying Glennon or Gardner Minshew will get the nod after a weeklong competition in practice.

Minshew regained the starting spot last week at Baltimore, but he was sacked five times and missed several open receivers deep. He also took a safety, lost a fumble and had an interception that was returned for a touchdown negated by a roughing-the-passer penalty.

James Robinson needs 35 yards to break Dominic Rhodes’ NFL record for most rushing yards (1,065) by an undrafted rookie. Robinson, who is dealing with an ankle injury, has been Jacksonville's best and most consistent player on either side of the ball this season.