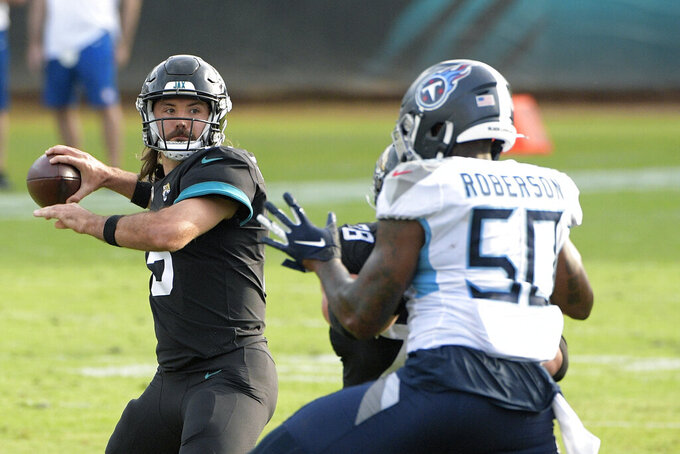 JACKSONVILLE, Fla. (AP) — Doug Marrone delivered a locker room speech like none of his others following Jacksonville’s 12th consecutive loss. The Jaguars coach stepped in front of his team and singled out one player in a dismal season that gets worse every week.

Marrone gave a glowing shout out to James Robinson, who became the fourth undrafted rookie in NFL history to top 1,000 yards rushing and the fastest to accomplish the feat (13 games). Robinson reached the milestone with a 47-yard scamper early in the fourth quarter of a 31-10 home loss to Tennessee on Sunday. It came on his last carry of the day.

“I’m sure some people may mock me for it, but I just thought it was the right thing to do,” Marrone said. “And I don’t think you’re ever wrong when you do the right thing.”

He needs 189 yards rushing in the final three games to break the franchise's rookie record (1,223) set by Fred Taylor in 1998. Not bad company for the former Illinois State standout who wasn’t among the 19 backs chosen in the 2020 NFL draft.

“I don’t ever really talk about individual accomplishments after the game, but I did because we don’t really have a lot going for us except we have three more opportunities,” Marrone said. “But it’s something that could be celebrated by all of us. … Here’s a guy that represents so much of what’s good about competition, about playing, about humility, about keeping things in perspective.

Robinson ranks third in the NFL in rushing, trailing Tennessee’s Derrick Henry (1,532) and Minnesota’s Dalvin Cook (1,352). He's been the biggest bright spot on one of the league’s worst teams.

Robinson enjoyed the moment in the spotlight, even though it really started on the sideline after his longest run of the season.

“It wasn’t awkward at all,” Robinson said. “I am grateful that he did that. Before the game was even over, all the guys were coming up to me and saying congratulations.”

He also welcomed being an example for current and future undrafted players.

“You don’t get drafted, it sucks, but once you get on a team, it’s still kind of the same feeling other than not having your name called on TV,” Robinson said. “But, yeah, just keep going out there and grinding and wait for your opportunity.”

Gardner Minshew will return as Jacksonville's starting quarterback at Baltimore on Sunday. Marrone made the announcement Monday, one day after Minshew replaced Mike Glennon in the second half and clearly looked like the team's best option at the all-important position.

Minshew received a rousing ovation as he entered the game and immediately led the Jaguars to their lone touchdown. He drove them into the red zone two more times against a prevent defense, but both ended with incomplete passes on fourth down.

Jacksonville’s defense gave up more than 420 yards for the third straight week, including a season-high 249 on the ground. Henry gouged the Jags for 215 yards rushing and two touchdowns. A.J. Brown caught seven passes for 112 yards and a one-handed touchdown that set the tone early.

Pass rusher Dawuane Smoot has been the team’s most consistent defender in recent weeks. He forced a fumble against Tennessee and had a combined three sacks in the previous two games. The late-season surge could bode well for the pending free agent.

Jaguars receiver DJ Chark had two catches for 16 yards, his fourth consecutive game without 60 yards or a touchdown. He also was flagged for illegal formation, negating Robinson’s 18-yard TD run in the third quarter.

The Jaguars will be without center Brandon Linder (ankle) for the second straight week and fifth time this season. He also missed games with knee and back issues. Guard Andrew Norwell (forearm) and cornerback Chris Claybrooks (core muscle) are expected to return to practice after missing the last three games while on injured reserve.

69 — Number of sacks Calais Campbell (2017-19) and Yannick Ngakoue (2016-19) combined for with Jacksonville. The Ravens duo will face their former team for the first time Sunday.

Jacksonville can tie the franchise record for consecutive losses in Baltimore. The initial mark was set by losing the final five games in 2012 and the first eight in 2013.