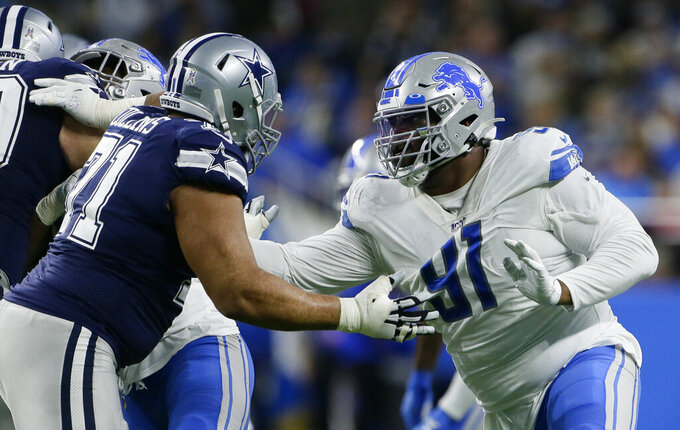 FILE - In this Nov. 17, 2019, file photo, Detroit Lions defensive tackle A'Shawn Robinson (91) is blocked by Dallas Cowboys offensive tackle La'el Collins (71) during the second half of an NFL football game in Detroit. Robinson agreed to join the Los Angeles Rams as a free agent in March as a replacement for longtime defensive lineman Michael Brockers. Robinson is still happy about his decision even after Brockers re-signed with the Rams when his deal with Baltimore fell through. (AP Photo/Duane Burleson, File)

LOS ANGELES (AP) — A'Shawn Robinson eagerly agreed to join the Los Angeles Rams as a free agent last month, thinking he was replacing Michael Brockers as the run-stopping heart of the defensive line for a franchise with three straight winning seasons.

When Brockers surprisingly re-signed with the Rams several days later after his free-agent deal with the Baltimore Ravens fell through, Robinson's role in LA was no longer so clear-cut.

Robinson said the unexpected development gave him no second thoughts about his decision.

“It just makes us a stronger team,” Robinson said in a video conference call Thursday. “I feel like it’s an opportunity.”

The former Detroit Lions starter has been in the NFL long enough to value team success over individual accolades, and he thinks coach Sean McVay's Rams provide his best opportunity to get it.

“Anything they need me to play, I’m willing to play,” Robinson said. “Wherever I’m at, I just want to win. I’ve been to the playoffs one time out of four years in the NFL, and I loved that experience. I want that experience back again, so whatever I need to do to get that, I’m willing to do that. It doesn’t matter. Any position. Nose tackle, whatever.”

Robinson could have many roles this season with the Rams, who are returning all three starters on the front line of last season's 3-4 defense. New coordinator Brandon Staley is also planning to run a 3-4 scheme, and while it's too early to know exactly where Robinson will get most of his snaps, the Rams think he has the versatility to contribute anywhere alongside All-Pro Aaron Donald.

Some NFL observers wondered whether the Rams would attempt to get out of their agreement with Robinson after Brockers ended up back with the team. Instead, McVay and general manager Les Snead gladly kept the 320-pound run-stopper whose mother had to bring his birth certificate to Little League football games in Texas to prove he wasn't a high schooler trying to play middle school ball.

“(Robinson) was a guy who, originally, you said, ‘OK, this is somebody you hope can be like what Michael has been for us,’” McVay said recently. “But then to be able to get Michael back and A’Shawn, and you look at the development of (starter) Sebastian Joseph-Day last year, Greg Gaines is an ascending player, we feel really good with the interior depth, and that’s before I even mention the unanimous all-decade player in Aaron Donald. ... You couldn’t feel better about the interior depth of our defensive line."

Robinson has been participating in virtual team meetings with the Rams this week, learning about their new defense and trying to get to know his new teammates. Robinson has already worked out with several Rams, including Donald and safety John Johnson, at the Mamba Sports Academy near the Rams' training complex during the offseason.

But Robinson knows this NFL season will be different because of the strange offseason, and it’s even tougher for players who are joining a new team.

“In training camp, you can really make a point of just hanging out and getting to know the guys,” Robinson said. “To really see and learn that body language on and off the field, you’re missing that chance to connect. We’re all going to be working towards it.”

When the pandemic hit, Robinson traveled to his offseason base in Arizona, where he can work out at private gyms in his friends' houses and do cardiovascular work, including mountain biking.

“We chop it up and just talk about daily life,” Robinson said of his early talks with his new teammates. “We just talk about everyday life. It was good to get to know them.”

McVay has recruited guest speakers to address his team on their massive video conference calls. Clippers coach Doc Rivers spoke to the team Thursday about teamwork and leadership.

“I learned a lot from Doc about leadership, and just trying to learn everything that we need to do to play our role and to help each other," said Robinson, who also cited important learning about teamwork and leadership from ESPN's documentary series about Michael Jordan and the Chicago Bulls.

"It really does help to have that constantly just get in your head. ... Just understanding what everyone's job is, and know that everyone matters in the whole concept of the team. You can't have missing links. Everyone matters."