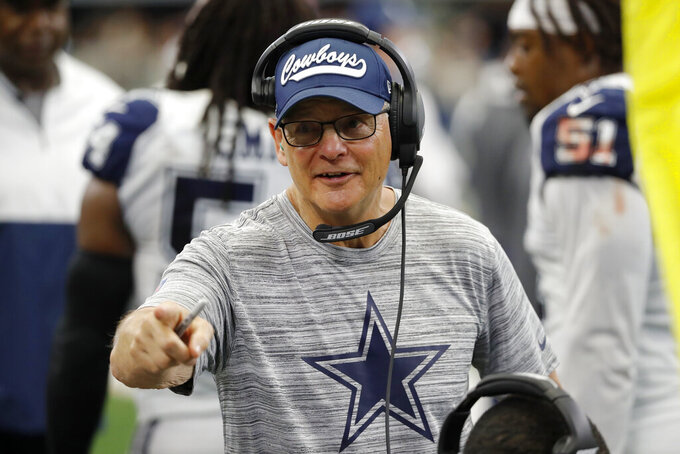 FILE - In this Sept. 22, 2019, file photo, Dallas Cowboys defensive coordinator Rod Marinelli talks to players on the sideline during the second half of an NFL football game against the Miami Dolphins in Arlington, Texas. Now with the Las Vegas Raiders, the 71-year-old war veteran known for his salty language on the practice field could be one of the team's most important offseason additions. (AP Photo/Roger Steinman, File)

When Jon Gruden arrived as head coach in Tampa Bay nearly two decades ago, he persuaded defensive line coach Rod Marinelli to stay on the staff in what Gruden calls one of his best recruiting jobs.

The two teamed to win a Super Bowl following the 2002 season and spent three more seasons together before Marinelli left to become a head coach in Detroit.

Gruden had a much easier time getting Marinelli to join him with the Raiders this offseason in a move he hopes will revive the pass rush.

“Well, there was no doubt in my mind,” Marinelli said about the offer to join Las Vegas as defensive line coach this past offseason. “I worked with coach in Tampa Bay, won a Super Bowl with him. I understand what he’s about. I understand his intensity, his passion for the game and that was an easy draw to come back.”

The 71-year-old war veteran known for his salty language on the practice field could be one of the Raiders most important offseason additions.

He is entering his 48th season as a coach with the past 24 coming in the NFL where he helped guide talented linemen like Warren Sapp, Simeon Rice and Julius Peppers over the years.

“He’s just like the grandpa who gives you whatever you want but asks a lot from you,” defensive end Arden Key said. “He asks a lot from us. He knows what he’s talking about. He’s coached a lot of Hall of Fame guys, and a lot of guys soon to be in the Hall of Fame. His track record speaks for itself and I feel like the whole d-line has bought in, and you don’t really have a choice but to buy in with a guy like Coach Rod Marinelli because you know you’re going to get better and you know you’re going to get pushed.”

Key is one of several linemen the Raiders hope will benefit from the wisdom and coaching of Marinelli. The third-round pick in 2018 has done a decent job generating pressure his first two seasons but only has three sacks in 23 games.

“Every day of my career, every day I come to work, it’s about developing men,” Marinelli said. “You develop the man first and then you develop the player, that’s critical for me. Once you reach that man, then you have heck of a ball player. That’s one of my goals every year. I love teaching, I love this game.”

Marinelli’s biggest task will be developing Ferrell. The Raiders surprised some experts when they drafted him fourth overall in 2019 ahead of players considered more dynamic rushers.

Ferrell struggled a bit as a rookie as he shifted between end and tackle and dealt with a midseason illness that cost him 15 pounds.

Ferrell has returned this season a much stronger player and the Raiders are hoping he can live up to his draft billing and help revitalize a defense that has struggled to generate any consistent rush since trading away Khalil Mack before the 2018 season.

“The biggest thing he told me is, you have to block out all of the noise, you have to come in and be a leader and you just get off and I’m going to clean you up,” Ferrell said. “That’s the biggest thing, I really love his teaching because he understands and appreciates that football isn’t a scientific thing at the end of the day. It’s a game that we love to play and you just have to go out there and play hard and play with disposition, so I love him for sure.”

Marinelli also brought in some familiar faces to help in the transition. The Raiders signed defensive tackles Maliek Collins and Daniel Ross, who played under Marinelli in Dallas.

Gruden has called Collins the key to the defense, hoping he will be able to collapse the pocket from the inside and create opportunities for Crosby and the other outside rushers.

Collins said the opportunity to stay with Marinelli was a big attraction when he signed with Las Vegas this offseason.