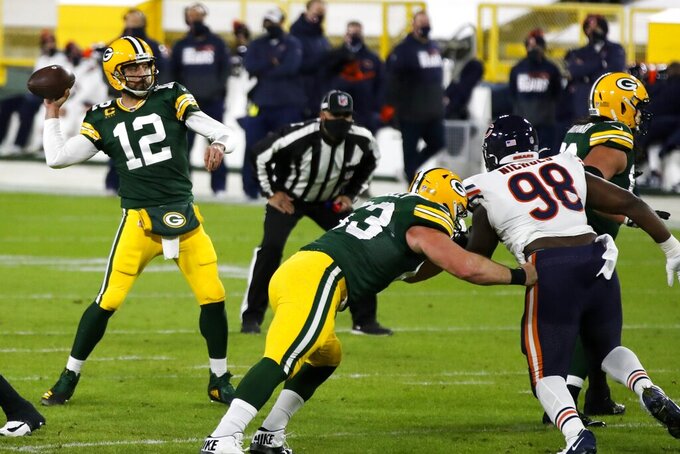 Aaron Rodgers picked apart Chicago’s defense once again last week, throwing four TD passes to give him 51 for his career against the Bears.

Only Brett Favre has ever thrown more against the Monsters of the Midway, with 60 in his career. That is one of 16 combinations of a quarterback throwing at least 50 TD passes against one team in the Super Bowl era. Favre also had 58 against the Lions and 54 against the Vikings.

Rodgers has a ways to go if he wants the record against any team, which was set by Dan Marino against the New York Jets with 72 TD passes. Rodgers faces the Bears once more this season and would need 10 more games after that at his current pace of 2.13 TDs per game against Chicago to break Marino’s mark.

Marino also threw 54 against the Colts and 50 against the Bills as he picked on his AFC East rivals to give three of those 50-TD careers against one opponent.

Rodgers has also thrown 50 against the Vikings and needs seven more against Detroit to complete the NFC North.

THREE FOR 30 CLUB: Rodgers also topped the 30-TD pass mark this season with the four touchdowns last week giving him a league-leading 33 on the season. That puts him ahead of Russell Wilson (31) and Patrick Mahomes (30) in the first year in NFL history that featured three QBs with at least 30 TD passes through Week 12.

RARE COMPANY: The Cleveland Browns haven’t been exactly dominating on their way to an 8-3 record. The Browns have been outscored by 21 points on the season thanks in part to lopsided losses to Baltimore and Pittsburgh and five wins by five or fewer points.

Among the 432 teams in NFL history to win at least eight of their first 11 games (or get at least eight wins in fewer games in shorter seasons), the only other team to do it while being outscored was the 1987 Chargers at a minus-8 point differential. San Diego started 8-1 that season before losing the final six games in a 15-game strike-shortened campaign.

SACKED: Philadelphia quarterback Carson Wentz is having a rough season three years after being an MVP candidate before suffering a season-ending knee injury. Wentz leads the NFL with 19 turnovers and has been sacked a league-high 46 times. The only players since 1996 to lead the NFL in both of those categories are Blake Bortles in 2015 and Jon Kitna in 2006.

SACKER: One of those sacks against Wentz came Monday night from Seattle’s Jamal Adams. That gave Adams 6 1/2 on the season, matching the career high he set last year for the Jets. Adams is the first defensive back to have multiple seasons of at least six sacks since it became an official stat in 1982.

PRIME TIME: Russell Wilson got another prime-time win Monday night when Seattle beat Philadelphia 23-17 to improve to 29-8-1 under the lights. Wilson’s .776 winning percentage in prime time is the best in NFL history among players with at least 20 starts, beating out Steve Young (.767) and Ken Stabler (.738).