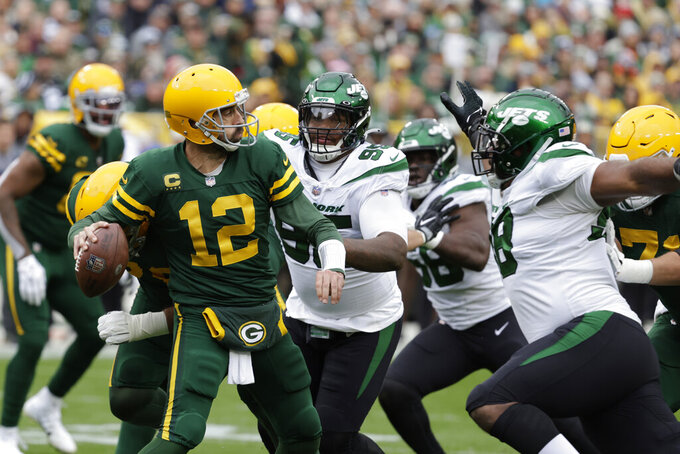 GREEN BAY, Wis. (AP) — Green Bay Packers quarterback Aaron Rodgers insists he’s still having fun even as he plays through a thumb injury while trying to lead a slumping offense on a .500 team.

“This has been my love since I was 5 years old. I still love waking up every day knowing I’m coming into 1265 (Lombardi Avenue),” the four-time MVP said Wednesday as he referenced the address of Lambeau Field.

Rodgers didn’t practice for a second straight Wednesday because of an injured right thumb, but said afterward that it’s feeling better. He hurt the thumb while getting hit before he could attempt a desperation pass on the final play of a 27-22 loss to the New York Giants in London on Oct. 9.

He said the thumb problem gave him grip issues at times Sunday when the Packers fell 27-10 to the New York Jets at Lambeau Field.

Rodgers has previously played through injuries and continued to thrive. He threw 20 touchdown passes without any interceptions through the Packers’ final seven regular-season games last season while fighting through a fractured pinky toe that severely limited his practice time.

“I can deal with pain,” Rodgers said. “Pain management has been part of all of our careers. We just learn to deal with whatever you’ve got going on. And if you can be out there, you’re out there.”

The Packers open a three-game road swing Sunday at Washington (2-4).

Rodgers said he expected to follow the same pattern as last week by returning to practice on Thursday and Friday. He said the thumb is improving and added that “hopefully in a couple of weeks it won’t be an issue.”

He’s eager to get back on the practice field and help figure out a cure for whatever ails the Packers’ struggling offense.

Green Bay (3-3) is searching for ways to boost an offense that has scored 10 points over its past six quarters, causing the Packers to lose consecutive regular-season games within the same season for the first time since Matt LaFleur’s arrival in 2019. The Packers are scoring 17.8 points per game to rank 24th in the league.

“We’ve got to look long and hard at how we’re playing and what we’ve got to do to get better,” Rodgers said.

“A lot of plays is 10 guys knowing the right thing and one guy missing the assignment, and we have issues. So if we can just clean up that one guy — and it’s not one particular guy, it’s different guys on every play, including myself — so if we clean that up, we’ll be fine.”

Rodgers has a passer rating of 94.2. He hasn’t finished a season with a rating that low since 2015.

He’s throwing to a receiving group that already was missing the traded two-time All-Pro Davante Adams and now is dealing with multiple injuries.

Veteran Randall Cobb injured an ankle against the Jets and rookie second-round pick Christian Watson didn’t play because of a hamstring injury. Neither practiced Wednesday, and LaFleur has indicated Cobb could miss multiple games.

Sammy Watkins returned to practice Wednesday after missing four games with a hamstring injury, but LaFleur noted that “I don’t think anybody’s ready to say that he’ll be playing this week.”

Rodgers also is working behind a line that hasn’t come close to matching its 2020 and 2021 form. He was sacked four times and pressured throughout the game in the loss to the Jets.

That line could have similar trouble against Washington.

The Commanders rank third in sacks (14) and quarterback hits (34) over the past four weeks. They have five different players with at least three sacks in Daron Payne, Jonathan Allen, Jamin Davis, Montez Sweat and Efe Obada.

“It can give you nightmares if you let it,” LaFleur said.

Rodgers looks forward to the challenge. The 38-year-old says he won’t let the Packers’ recent issues impact his love for the game.

“I live for this. I wake up in the morning thinking about this,” Rodgers said before adding one last quip. “I go to bed at night dreaming about what plays I can make up to (tick) Matt off.”