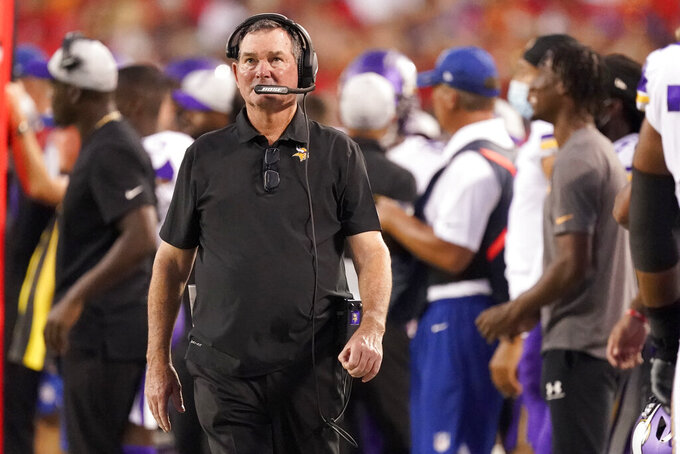 Minnesota Vikings head coach Mike Zimmer watches from the sidelines during the first half of an NFL football game against the Kansas City Chiefs Friday, Aug. 27, 2021, in Kansas City, Mo. (AP Photo/Charlie Riedel)

The goal of a division title for Green Bay’s competitors felt in closer reach during the offseason, the rift between Packers leaders and Aaron Rodgers creating legitimate curiosity about whether the three-time league MVP would return to the only franchise he's ever played for.

Well, he's back in green and gold — never left, really — with a last-chance vibe surrounding his chase for a second Super Bowl ring after losing in each of the past two NFC championship games.

“I don’t want a farewell tour,” the 37-year-old Rodgers said. “I don’t know what’s going to happen after the season, but I’m going to enjoy it with the right perspective, for sure."

NFL teams are normally absorbed in developing their own players, hesitant to publicly comment on another club's issues for fear of what could be coming around their own corner.

There's no doubt, though, that Chicago, Detroit and Minnesota were paying attention while Rodgers skipped spring practices and spoke openly about his frustration with the approach of the front office.

The drama surrounding Rodgers and his future likely hasn't disappeared, but the expected transition at quarterback to Jordan Love can wait for now.

The Packers are loaded for another run at a title after 13-3 records in their first two years with coach Matt LaFleur, still riding the enviable wave of having a Hall of Fame-caliber quarterback in place since Brett Favre took over in 1992. Rodgers replaced him as the starter in 2008, and the Packers have won the NFC North seven of 13 times — plus the Super Bowl after the 2010 season.

Here's a glance at the condition of the division that's currently controlled by Green Bay:

One potential concern for the Packers is the offensive line, where draft picks Josh Myers (second round) and Royce Newman (fourth round) are in line for starting spots. That's because All-Pro left tackle David Bakhtiari is on the physically unable to perform list, still recovering from a torn ACL and sidelined for a minimum of six games. All-Pro center Corey Linsley left as a free agent.

The Packers have a more than capable fill-in for Bakhtiari with Pro Bowl left guard Elgton Jenkins, but given the exigency surrounding Rodgers and his situation he clearly won't have much patience for rookie mistakes.

There's even more pressure on the Vikings, with Zimmer starting his eighth season and only two wins in the playoffs during his tenure. They showed their urgency — or perhaps desperation — by adding 10 veterans to a defense that deteriorated badly last year.

Five-time Pro Bowl safety Harrison Smith will be the only starter in the opener that was in the lineup at the end of last season, when key injuries depleted an already young group.

“We added a lot of talent, a lot of smart guys,” Smith said. "We’ve all mixed in pretty well. I’m excited about the group we have and what we can do.”

The Bears traded up in the first round to take Justin Fields with the 11th overall pick, eager to make the former Ohio State star the kind of fixture at quarterback that Rodgers has been for their biggest rival. Not so eager to give the rookie the job right away, though.

Impatient Bears fans have been grumbling about the decision to start veteran Andy Dalton for at least the first few games. Dalton is a three-time Pro Bowl pick entering his 11th year in the NFL.

“We’re very confident in him and where he’s at,” general manager Ryan Pace said, "so there’s no need for us to rush Justin.”

The one other team in the division that could always match the stability at quarterback of the Packers with Rodgers — if not quite in stature — was the Lions.

Not now, with Matthew Stafford in Los Angeles and Jared Goff making his Detroit debut following a headliner of an offseason trade. Goff was a No. 1 overall draft pick himself, with a 42-20 record as a starter over the past four years, but his consistency and production have dropped off, raising questions about whether he's the long-term answer for the Lions.

What would help Goff immensely is the continued development of running back D'Andre Swift after a promising rookie season in 2020. The Lions added former Packers backup Jamaal Williams, too.

The annual external doubts about one of the league's longtime losers are also, naturally, part of fiery new coach Dan Campbell's motivation plan. The Lions are 14-33-1 over the past three years.

“If you are a true competitor, it gives you a kick in the rear,” Campbell said. “I like that, and I know guys that we brought in here, they love it.”