Rodgers' strong play has Packers off to 7-1 start 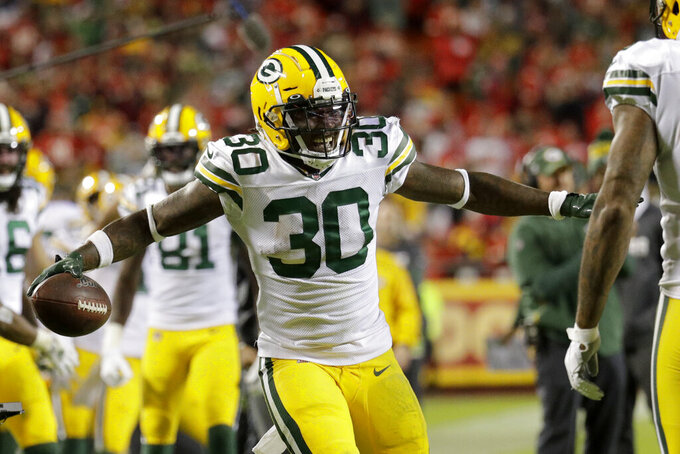 Green Bay Packers running back Jamaal Williams (30) celebrates with tight end Marcedes Lewis (89) after he scored a touchdown off a throw by quarterback Aaron Rodgers during the second half of an NFL football game against the Kansas City Chiefs in Kansas City, Mo., Sunday, Oct. 27, 2019. (AP Photo/Charlie Riedel)

Rodgers led the Packers past the Oakland Raiders last week and Kansas City Chiefs on Sunday. On the heels of throwing five TD passes against the Raiders, Rodgers added three more against the Chiefs.

After throwing eight touchdown passes in the first six games, Rodgers has thrown eight the past two games — including a remarkable 3-yard touchdown pass to running back Jamaal Williams in the fourth quarter with two Chiefs defenders in his face. His strong play has helped the Packers (7-1) to their best start since opening 13-0 in 2011.

"Some of those throws just leave you speechless, to be honest with you," coach Matt LaFleur said.

Making Rodgers' performances all the more impressive is he's done it without star receiver Davante Adams, who missed his fourth consecutive game with turf toe.

"We've found a way to win," Rodgers said after the 31-24 victory over the Chiefs. "It hasn't been the prettiest the entire time. There's been some pretty moments, though. It's a lot of guys really pitching in (and) it it's given those guys a chance to gain some confidence. At the same time, we're excited about getting (Adams) back at some point."

Rodgers is playing so well that LaFleur took a chance on third-and-5 at the two-minute warning. He could have kept the ball on the ground and drained 45 seconds off the clock. Instead, he called a pass. An incompletion would have stopped the clock and given the Chiefs a chance to rally. Instead, Rodgers fired a pass into the flat to running back Aaron Jones for the clinching first down.

Jones wasn't much of a factor in the passing game his first two seasons but has become a major option this season. Not only does he have a team-leading 466 rushing yards, but he paces the club with 34 receptions — almost matching the 35 receptions he had in his first two seasons combined. Against the Chiefs, he had a 50-yard catch in the first half, a 67-yard touchdown in the second half and the clinching third-down conversion.

Jones' production as a receiver could put defenses in a bind, because he's been routinely beating linebackers in coverage. The answer for opposing defensive coordinators would be to use an extra defensive back, but that would invite Jones to get the ball in the running game.

"I think when we get in some of those empty formations or we have the back out wide," LaFleur said, "it forces the defense to make a decision, if they're in man coverage, of, 'All right, who are we going to match up with who?'" Then it's our responsibility to try to exploit the best matchup."

Green Bay's pass defense, which is fourth with eight interceptions, fourth with 39 passes defensed and 14th with 20 sacks, has made some big plays. However, on a play-to-play basis, the Packers have given up big games to Dallas' Dak Prescott, Oakland's Derek Carr and the Chiefs' Matt Moore. The Packers are 24th with 7.30 yards allowed per pass play. Up next: the Chargers' Philip Rivers, who is on pace to pass for more than 4,600 yards.

The Packers haven't a running back like Jones since Ahman Green at the start of the millennium. Jones had a huge game against the Chiefs, with 67 yards on 13 carries (5.2 average) and seven catches for 159 yards (22.7 average) and two touchdowns. That receiving total was the most by a running back since Le'Veon Bell in 2014.

The Packers are 4-0 without Adams but the contributions from the rest of the receiver group have been sporadic. Regular starters Marquez Valdes-Scantling (one catch, 4 yards) and Geronimo Allison (one catch, 7 yards) combined to catch two of five targeted passes for 11 yards.

Right tackle Bryan Bulaga, who had not allowed a sack in the first seven weeks but gave up one on Sunday, missed the final two series with an injured right ring finger. Alex Light replaced him, with the Packers scoring a touchdown on his first possession and running out the final five-plus minutes on the second. Bulaga expects to play on Sunday at the Los Angeles Chargers once he and the trainers can settle on a protective device.

61.5 percent — Green Bay's third-down conversion rate the past two games. The first six games, the Packers moved the chains only 31.0 percent of the time.

After a home-heavy schedule to start the season, the Packers will play a second consecutive road game, this one at the Chargers.