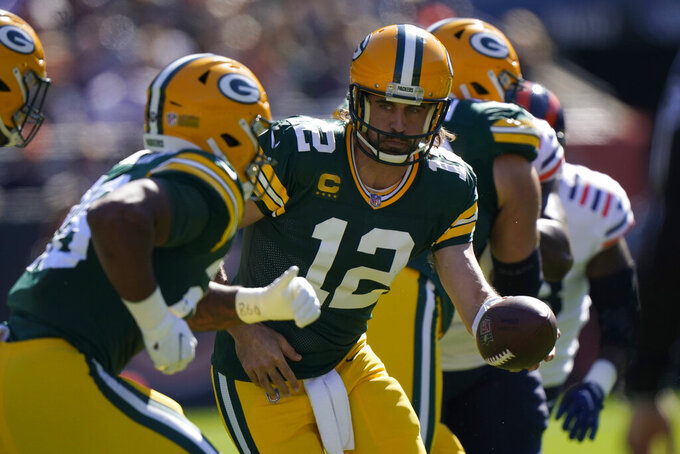 Green Bay Packers quarterback Aaron Rodgers (12) hands the ball off to running back A.J. Dillon during the first half of an NFL football game Sunday, Oct. 17, 2021, in Chicago. (AP Photo/Nam Y. Huh) 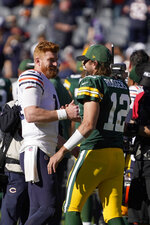 Rodgers turned toward the crowd after running for a touchdown to help secure yet another win for Green Bay over Chicago. Then, he yelled, “I still own you! I still own you!”

Rodgers threw for two touchdowns and ran for another, leading the Packers to a 24-14 victory over the Bears on Sunday.

“I love playing in Soldier Field,” Rodgers said. “I said this week I have a lot of respect for the fans. I'm sure there's a little bit of respect coming back my way, not a lot of love I'm sure. Had a lot of great moments on this field, a lot of great battles.”

The Packers (5-1) beat the Bears (3-3) for the 20th time in 23 games counting the playoffs and improved to 22-5 with Rodgers as the starter against Chicago. They also prevented their rivals from tying them for the NFC North lead.

Rodgers shook off a sluggish start, throwing a 1-yard touchdown to Allen Lazard in the second quarter and a 12-yarder to Aaron Jones in the third, making it 17-7.

Rodgers put away the Bears after Justin Fields threw a 5-yard touchdown to Darnell Mooney, cutting the lead to three with 8:44 left. He scrambled in from the 6 to cap a 75-yard drive, bumping the lead back up to 10. He then turned toward the crowd and yelled, “I still own you! I still own you!”

Rodgers joked about blacking out and said: "I looked up in the stands, and in the front row, all I saw was a woman giving me the double bird. I'm not sure what came out of my mouth next.”

“I think it shows we will be OK," Jones said. "It shows we can win games in multiple ways. We have the leaders that we need. We have everybody in the locker room that we need to get the job, just continue to put the work in and stack success.”

A rare win over Green Bay would have been a major statement for the Bears after they looked lost a few weeks ago. They steadied themselves by beating Detroit and Las Vegas, only to be taken down by the Packers.

“This hurts,” coach Matt Nagy said. “It stings. It’s not fun. Our guys understand that.”

Fields led the Bears on an 80-yard touchdown drive on their first possession that ended with rookie Khalil Herbert scoring from the 1, only to cool off after that. The No. 11 overall draft pick was 16 for 27 for 174 yards with a touchdown and an interception.

Herbert ran for a season-high 97 yards with David Montgomery (sprained knee) on injured reserve and Damien Williams on the reserve/COVID-19 list. He scored from the 1 on the game’s opening drive. Khalil Mack, Robert Quinn and Akiem Hicks each had a sack.

“I just didn’t play how I needed to play for us to get the win,” Fields said. “Again, I just need to be better.”

Green Bay's Mason Crosby made his lone field goal and all three extra points coming off a shaky outing. A week earlier against Cincinnati, he missed three field goals and an extra point before booting the winning 49-yarder in overtime.

The Bears thought they had a free play late in the first quarter, when Fields had a heave toward the end zone intercepted by Darnell Savage. It looked like the Packers might have jumped offside, but no flag was thrown.

“I looked up in the air, interception, I wasn’t worried about it," Mooney said. "And then I looked back and there wasn’t a flag. I was like, Whoa. We didn’t snap the ball for no reason.”

Packers: C Josh Myers (knee) had to be helped off the field following a running play on the opening possession and did not return. “I don't think it's gonna be a season ender,” coach Matt LaFleur said. “But we'll continue to look at it. That was a bad play call by me for us not blocking the nickel off the edge, and that's what caused that.” Myers missed last week’s game because of a finger injury. ... LT Elgton Jenkins returned after missing three games with an ankle injury. ... Savage left with a concussion after the first play from scrimmage in the second half. He was hurt tackling Herbert on a run.

Bears: KR/PR Jakeem Grant Sr. (ankle) was hurt on a punt return in first quarter. He came back into the game in the second quarter, but Artavis Pierce handled returns down the stretch. ... DB Deon Bush (quad) exited in the second half.