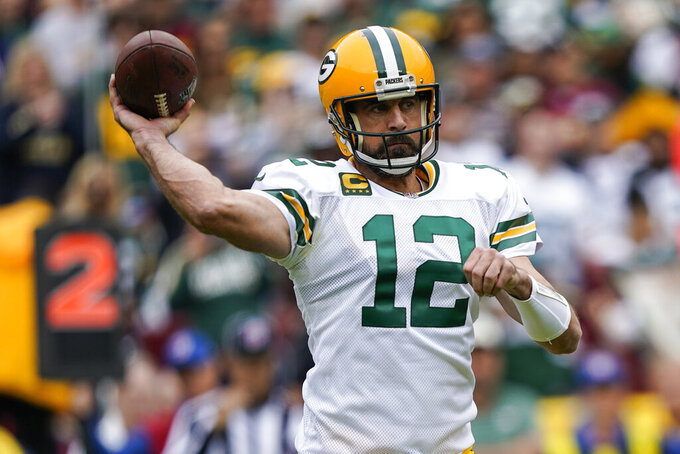 Green Bay Packers quarterback Aaron Rodgers throws the ball during the first half of an NFL football game against the Washington Commanders, Sunday, Oct. 23, 2022, in Landover, Md. (AP Photo/Susan Walsh)

GREEN BAY, Wis. (AP) — The Green Bay Packers are carrying a three-game losing streak and one of the NFL's worse offenses into this week's game at Buffalo against the Bills.

Packers quarterback Aaron Rodgers said during his weekly interview on “The Pat McAfee Show” on YouTube and SiriusXM on Tuesday that the offense was making far too many mental mistakes. Frequent offenders, he said, should lose playing time.

“When you’re struggling on offense, you’ve got look at everything, the details, and there’s been too many simple mental errors,” Rodgers said after Wednesday’s practice. “I’m not a robot up here. I think people in this society have a hard time hearing the truth sometimes, so I’m going to hold guys accountable.”

The tough approach is fine with coach Matt LaFleur, who leads the Packers (3-4) against the Bills (5-1) on Sunday night.

“Sometimes the truth hurts,” LaFleur said. “It’s no different than when your kids make a mistake.”

Veteran receiver Sammy Watkins, who returned last week after missing four games with a hamstring injury, agreed with his quarterback’s way of thinking.

“This is a business. If you’re not performing or executing or doing the things that you’re supposed to be doing, then I’m with Aaron,” Watkins said. “If I’m not playing well and I’m freaking up and busting plays, get me out of the game because that’s not helping the team. I think that’s a wake-up call to everybody, wake-up call to myself. I try to limit myself to having one M.A. (missed assignment) a game, and that’s my goal. The goal is to have none, but things happen in the fire.

"I’m with Aaron, man. I feel like everybody is on the hot seat right now, even myself. I’ve got go out there and make plays.”

Several years ago, when Rodgers was trying to maximize the talents of young tight end Jermichael Finley, the QB and player would meet on Saturday night at the hotel to go over some plays in which Finley would be a featured player.

In another desperate-times measure, those day-before-the-game meetings could start again as Rodgers tries to get on the same page with a receiver corps that’s struggling without Davante Adams and has three rookies trying to find their way.

“Like Kevin Garnett said, ‘anything’s possible,’" Rodgers said. “Whatever it takes to win.”

Watkins said the offense had 13 or 14 mental errors last week. Rodgers said the mistakes routinely have reached double digits this season, when maybe a half-dozen had been the norm in past seasons.

The problem confronting LaFleur and his staff are the time limitations. It’s not as if the Packers can schedule an extra practice or longer practices. All they can do is work smarter, not harder, to eliminate some of the mistakes that have made moving the ball so difficult.

“It’s a fine line with how much you give them, what you put on their plate and making sure they can regurgitate the details,” LaFleur said. “I think one thing we all have to do as a staff is a much better job of less telling and more asking questions, because that’s when you know the comprehension level of these guys.

"At the core of this thing, we’re teachers first and foremost. I think by nature that’s a tendency of a lot of coaches, myself included, (is) you sit up there and you just talk, talk, talk, talk, talk. There’s got to be a back and forth. You’ve got to make sure these guys are retaining whatever it is you’re telling them.”