Roethlisberger, Brees knocked out of games with injuries 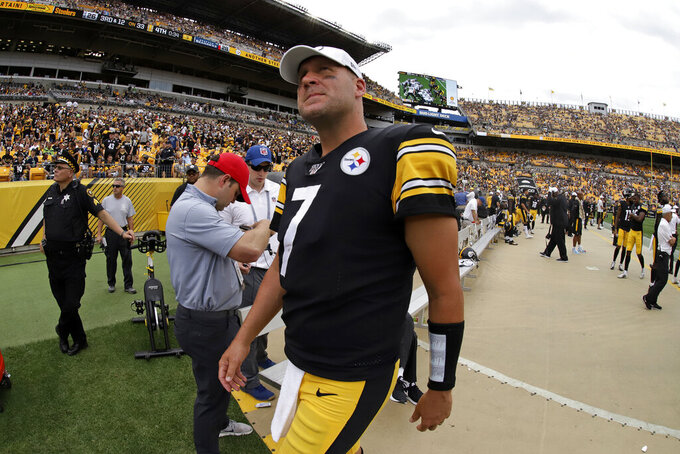 Pittsburgh Steelers quarterback Ben Roethlisberger (7) walks off the field as time runs out in a 28-26 loss to the Seattle Seahawks in an NFL football game in Pittsburgh, Sunday, Sept. 15, 2019. Roethlisberger did not play the second half of the game. (AP Photo/Gene J. Puskar)

Two Super Bowl-winning quarterbacks were knocked out of their respective games on Sunday.

Ben Roethlisberger left Pittsburgh's 28-26 loss to Seattle with an unspecified right elbow injury late in the first half.

The 37-year-old Roethlisberger grimaced after throwing a pair of passes on a drive late in the second quarter. Though he was under duress several times during the first half, he didn't appear to be touched on the plays that left him clutching the elbow.

Tight end Vance McDonald said the starting offense was told Roethlisberger was hurt just before heading out for the second half.

Roethlisberger was 8 of 15 for 75 yards against Seattle before exiting. He spent a portion of the second half talking to backup Mason Rudolph and offensive coordinator Randy Fichtner, providing insight and guidance.

The Saints' Drew Brees was forced out of his NFC title game rematch against the Rams late in the first quarter.

His throwing hand collided with Aaron Donald's outstretched hand while he threw an incompletion on the Saints' second drive, and the NFL's career leader in yards passing spent the afternoon on the Coliseum sideline with his thumb heavily wrapped.

And the Rams lost two offensive starters: right guard Austin Blythe injured his ankle in the first half, and tight end Tyler Higbee had a chest injury early in the second half.

The Patriots are off to a dominating 2-0 start after having outscored the Steelers and Dolphins by a combined 76-3. However, their battered offensive line was dealt another blow when left tackle Isaiah Wynn left in the first half with a foot injury. Marshall Newhouse replaced him. The Patriots also are without center David Andrews because of blood clots and right tackle Marcus Cannon missed the game with a shoulder injury.

San Francisco left tackle Joe Staley broke the fibula in his left leg in the third quarter of his team's 41-17 rout of Cincinnati. The 49ers think he could return in less than eight weeks.

"I really think this team is special," Staley said. "I'm going to do everything in my power to get back and help this team down the stretch."

Bengals backup offensive lineman Andre Smith went out with a groin injury in the second quarter. Rookie left guard Michael Jordan suffered a knee injury and was carted off in the second half. Bengals coach Zac Taylor had no updated information about his condition. Defensive end Carl Lawson hurt his right hamstring in the second half.

Chiefs left tackle Eric Fisher left on the opening drive against Oakland after reinjuring his groin that he hurt in practice on Friday. Raiders returner Dwayne Harris injured his left ankle covering a punt in the second quarter and didn't return.

Giants wide receiver Cody Latimer left the game against Buffalo early in the fourth quarter with a concussion.

The Cowboys lost defensive end Antwaun Woods in the second quarter against Washington with a left knee injury. Washington safety Montae Nicholson left briefly with a foot injury that appeared to bother him even after he returned, and tight end Vernon Davis missed a handful of plays with an eye injury.

Packers safety Raven Greene was carted off the field with an ankle injury following the first play of the second half against Minnesota. He did not return.

Chargers safety Adrian Phillips left early in the fourth quarter against Detroit with a forearm injury.

Colts cornerback Pierre Desir hurt a knee in the third quarter at the end of a 25-yard catch by Titans receiver Corey Davis. He did not return.

Ravens safety Brynden Trawick hurt his left arm while on the punt return team against Arizona.