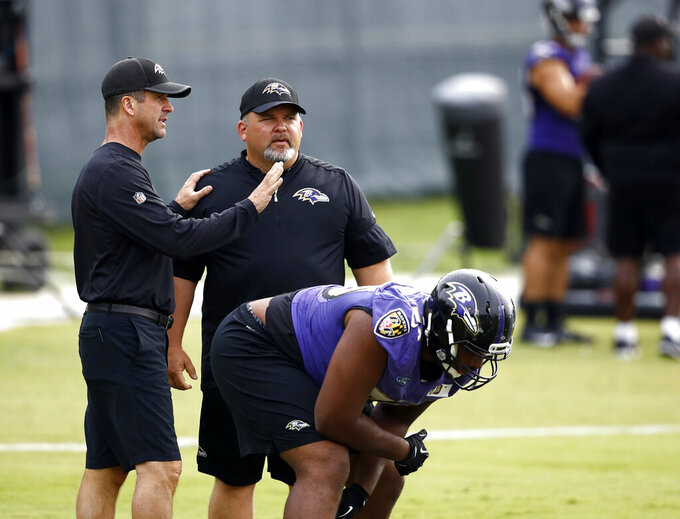 FILE - In this Aug. 8, 2017, file photo, Baltimore Ravens head coach John Harbaugh, left, speaks with then-senior offensive assistant/tight ends coach Greg Roman as offensive tackle Ronnie Stanley prepares to run a drill during an NFL football training camp practice in Owings Mills, Md. Roman is off to a running start in his new role as offensive coordinator of the Baltimore Ravens, working on a ground game that will coincide with the skills of agile quarterback Lamar Jackson. (AP Photo/Patrick Semansky)

OWINGS MILLS, Md. (AP) — Greg Roman is off to a running start in his new role as offensive coordinator of the Baltimore Ravens, working long hours to construct a unit that can fully utilize the talents of quarterback Lamar Jackson.

The Ravens closed the regular season with a 6-1 run behind Jackson, who keyed an effective ground game with frequent forays out of the pocket and downfield. Baltimore ended a three-year hiatus from the playoffs, winning the AFC North before losing to the Chargers.

The goal this offseason is to make an effective attack even better. Promoted last month from assistant coach/tight ends coach, Roman is rewriting a playbook that was originally devised for a pass-oriented offense led by Joe Flacco.

"We're trying, soup to nuts, from the ground up ... to hit the sweet spot with how we put this offense together," Roman said Tuesday.

The focal point is Jackson, the 32nd overall pick in the 2018 draft. After Flacco injured his right hip in November, Jackson took over and displayed the slick moves and elusiveness that earned him a Heisman Trophy at Louisville.

The rookie finished as the team's second-leading rusher with 719 yards. He spearheaded a ground game that finished second in the NFL with 152.6 yards per game — including an league-high 1,607 yards rushing over the final seven games.

"You're going to see a lot of elements of that this year," Roman said.

The result, he hopes, is something on a much grander scale.

"We have run an offense here that has kind of morphed over the years, and we really want to start fresh, start new," Roman said. "Everything from our language, our formations, how we do everything. Rebuild the thing. That's one angle.

"The other angle is really, how do we want to move forward with Lamar Jackson? He's a unique player with a unique skill set, so let's build an offense that really accommodates that, as opposed to try to fit him into something that other people had once done."

Roman took over for Marty Mornhinweg in part because of his work as an offensive coordinator in San Francisco and Buffalo, where he helped construct effective attacks with running quarterbacks in Colin Kaepernick and Tyrod Taylor.

At the time of Roman's hiring, coach John Harbaugh said, "Increasing Greg's responsibilities will help us get where we're going on offense."

Constructing a new playbook is not an easy process.

"It's a real grind. We're really looking at this as a completely new beginning, as if we were a new staff," Roman said. "I've kind of compared it to putting your kid's furniture together from IKEA or something. If you make one wrong move, you've got to take the whole thing apart and start over again."

For the offense to work, the Ravens must fortify the offensive line, get a rugged receiver capable of blocking downfield and hope Gus Edwards can continue to develop after a rookie season in which he was activated from the practice squad in October before running for a team-high 718 yards.

Most of all, however, they need Jackson to be better. His running prowess and determination are fine, but he had only one 200-yard passing game and fumbled 12 times.

"Moving forward, consistent fundamentals are what's really going to take him to the next level," Roman said, "because he's got all the ability in the world."