Rookie CB Newsome out again for Browns, defense banged up 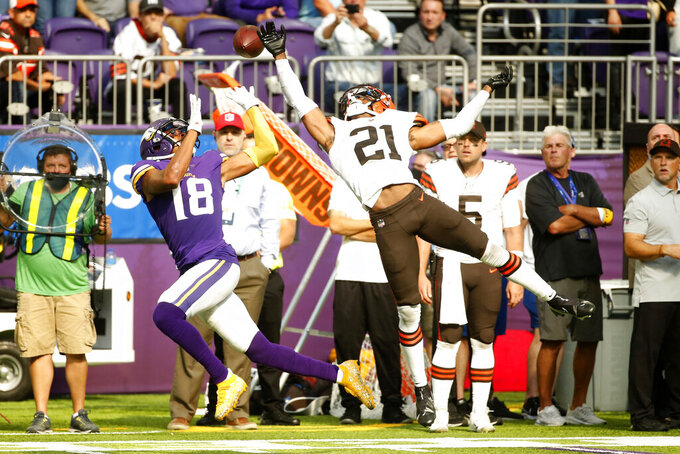 Walker was designated to return from injured reserve Wednesday after sitting out the past three games with a hamstring injury. As long as he doesn't have any setbacks, Walker will likely be activated later this week to play against the Los Angeles Chargers.

Coach Kevin Stefanski said it's too early to know if Walker can suit up Sunday.

“With any of these guys coming off an injury, we’ve seen them move around in their rehab, but we definitely want to see them practice football first," he said.

The Browns could use Walker, who calls signals. Their No. 2 overall ranked defense is a little banged up at the moment.

Stefanski did rule out Newsome, who also missed last week's win at Minnesota. Greedy Williams started in place of the first-round draft pick and got his first career interception in the 14-7 win.

Newsome, the No. 26 overall draft pick from Northwestern, got hurt late in Cleveland's win over Chicago on Sept. 26.

Stefanski did not provide any specifics on the other injuries.

“With all those guys, we’ll see how the week goes,” he said. "But just being smart about some of those things.”

Wills has been dealing with his injury since Week 1. He's continued to start despite missing practice time, but the former Alabama star but had to leave the field Sunday in the second half. He was replaced by rookie James Hudson, who played 21 offensive snaps.