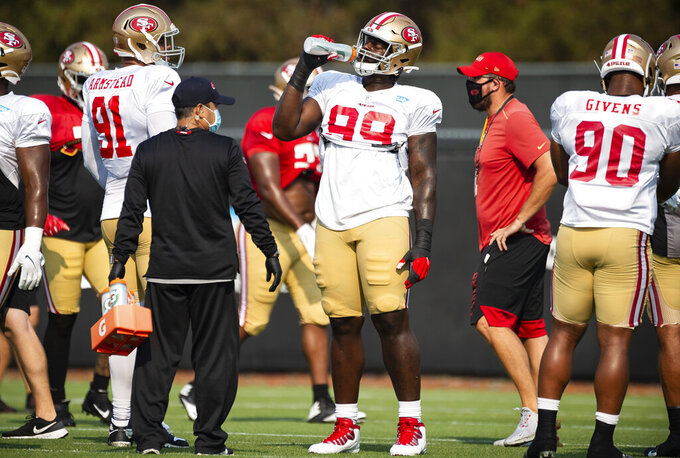 While the massive Kinlaw may tower over most of his teammates with his 6-foot-5, 319-pound frame, filling that void left by Buckner is more of a process.

“He’s getting his feet under him,” defensive coordinator Robert Saleh said. “I think he’s trying to find his way. I think our offense is (tough) to go against on a day in and day out basis with how fast and how physical they are. ... It’s tough, but he’s coming along every day. He’s made a small improvement every single day, so the focus for him is just continue to get better and hit the ground running come Week 1.”

One of the biggest changes the Niners made this offseason is when they traded their most consistent defensive player, Buckner, to Indianapolis for the 13th pick in the first round. They then traded down one spot with that pick and took Kinlaw to add another talented piece to a line that also features former first-round picks Nick Bosa, Dee Ford and Arik Armstead.

But replacing Buckner is not an easy task as he was named the team MVP in 2019 when the 49ers went to the Super Bowl. Buckner’s 143 quarterback pressures were the fifth-most among all interior linemen over the past four years, according to NFL NextGen stats.

Replacing that as a rookie isn't easy as evidenced by the learning process Kinlaw is going through this summer.

Kinlaw was viewed as the best interior pass rushing prospect coming out in the draft even though he only had 11 1/2 sacks his final two years at South Carolina. But he had 39 QB pressures this season, according to SportsInfo Solutions, despite playing out of position at nose tackle for more than one-third of his snaps.

Kinlaw said he mostly got by in college playing “bully ball” because he was so much stronger than almost every player he went up against.

That’s not the case in the pros and matchups in practice with powerful guards like Laken Tomlinson have been an eye-opening experience for Kinlaw. He has struggled during one-on-one pass rush drills.

“It’s a technique thing where you grow up your whole life and you can just muscle and bully people,” Saleh said. “All of a sudden you get into the league where they’re just like you and it’s more technique, fundamentals, strain, tenacity, all of it comes into fruition and the intangibles are what wins football games for these professionals. We always talk about the difference between player A and player B is always, it’s minuscule. It’s the intangibles that make the difference. ... It’s the intangibles that he’s got to work on in terms of just learning how to play football from a fundamental standpoint, where he can use that big body to just create even more power and leverage.”

Kinlaw has spent plenty of time picking the brains of the more accomplished linemen on the roster and has impressed the Niners with his work ethic and eagerness to learn.

“I’m making improvements,” Kinlaw said. “That’s the main thing. Just get better day by day. That’s it. That’s all I’m really trying to do. I knew coming in that it wasn’t going to be easy. So I already had prepared myself for that. I see the improvements daily.”