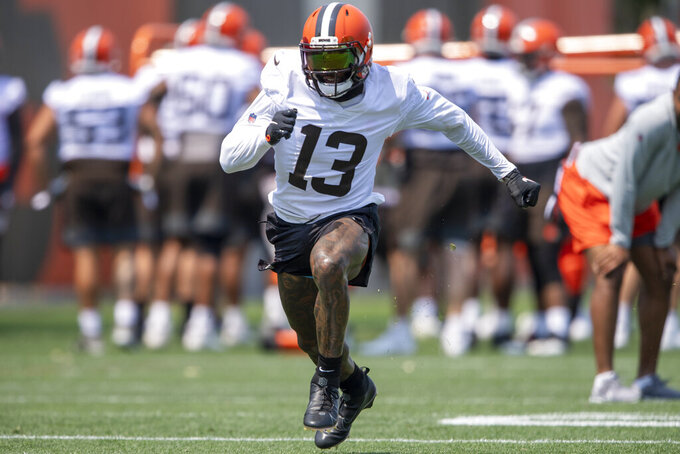 OPENING LINE: Browns by 7/12, according to FanDuel SportsBook.

TURNOVER DIFFERENTIAL: Chicago plus-1; Cleveland minus-2.

BEARS PLAYER TO WATCH: QB Justin Fields. The highly touted rookie will make his first NFL start, replacing Andy Dalton, who injured his left knee last week. Fields played in the second half against Cincinnati and the No. 11 overall draft pick went 6 of 13 for 60 yards with a late interception that led to a touchdown. He added 31 yards rushing.

BROWNS PLAYER TO WATCH: WR Odell Beckham Jr.. The speedy star will likely play for the first time since suffering a season-ending knee injury in October and undergoing surgery. Beckham was full-go in practice all week and looks ready to help.

KEY MATCHUP: Bears OLB Khalil Mack vs. Browns RT Jack Conklin. If Chicago is going to beat Cleveland, Mack will need to be disruptive and get to Browns QB Baker Mayfield, who is nursing a sore left shoulder. Mayfield noted this week that it's crucial to not let Mack be “a game changer.”

KEY INJURIES: Dalton is week to week with a bruised knee. Coach Matt Nagy insists the veteran remains the starting quarterback, but that could change depending on how Fields plays while Dalton is out. ...Bears NT Eddie Goldman missed the first two games with a knee injury after sitting out last season because of COVID-19 concerns. He's questionable. ... Browns WR Jarvis Landry is out with a sprained knee suffered early in last week's game. The five-time Pro Bowler is on injured reserve and will miss at least three games. ... Browns starting LT Jedrick Wills Jr. played last week on a sprained ankle after not practicing. He made it until the third quarter before it stiffened. LB Sione Takitaki (hamstring) has also been slowed, further weakening a unit missing Anthony Walker Jr. (hamstring), who is out at least one more game after going on IR.

SERIES NOTES: The Bears have won three straight over the Browns, who last beat Chicago in 2005. ... The teams first met in 1951, when Hall of Fame coaches George Halas and Paul Brown led the respective clubs. ... Dalton went 12-5 against the Browns when he was with Cincinnati.

STATS AND STUFF: The Bears have won nine straight against the AFC North . ... Chicago sacked Joe Burrow four times last week. ... Fields is well known to Browns fans after starring at Ohio State. ... The Bears took the ball away on four consecutive possessions and picked off three straight passes during the decisive stretch against the Bengals. LB Roquan Smith returned one of those picks 53 yards for his first career TD. ... The Bears threw just one pass to a tight end last week. ... LB Robert Quinn has 1 1/2 sacks after finishing with two in 15 games last season, the two-time Pro Bowler’s first in Chicago. ... WR Allen Robinson has caught at least one pass in all 90 career games, the NFL’s second-longest active streak behind Arizona’s DeAndre Hopkins (128). Robinson caught his 40th career TD last week. ... S Eddie Jackson had his eighth career forced fumble last week. He has seven since the start of 2018, second among safeties to New Orleans’ Malcolm Jenkins (eight). ... CB Jaylon Johnson had his first career interception in the win over Cincinnati. ... Bears K Cairo Santos has made his last 29 field-goal tries. ... Mayfield completed 19 of 21 passes last week. He leads the league with a completion percentage of 81.6. — the highest in league history after two games. ... Mayfield suffered a left shoulder injury while making a tackle last week, but didn't miss a snap. ... Landry is sitting out a game for the first time in his career due to injury. His streak of catching at least two passes ends at 111 games. ... RB Nick Chubb gained 95 yards last week and sealed the game with a 26-yard TD run in the fourth quarter. ... Cleveland's revamped defense has struggled in the early going to get off the field. Kansas City was 9 of 13 on third-down conversions in Week 1, and Houston went 7 of 13. ... The Browns' defensive line — with Myles Garrett at one end and Jadeveon Clowney on the other — hasn't created much pressure, making just two sacks in two games. ... Cleveland leads the league with seven rushing touchdowns. ... Browns S Grant Delpit made a sack in his pro debut last week. A second-round pick in 2020, he missed his entire rookie season with a ruptured Achilles tendon.

FANTASY TIP: Garrett and Cleveland's defense are due for a breakout performance, and it will be interesting to see if defensive coordinator Joe Woods, who has been getting heat from fans, decides to dial up pressure to fluster Fields.