Rookie Finley gets to show what he's got vs blitzing Ravens 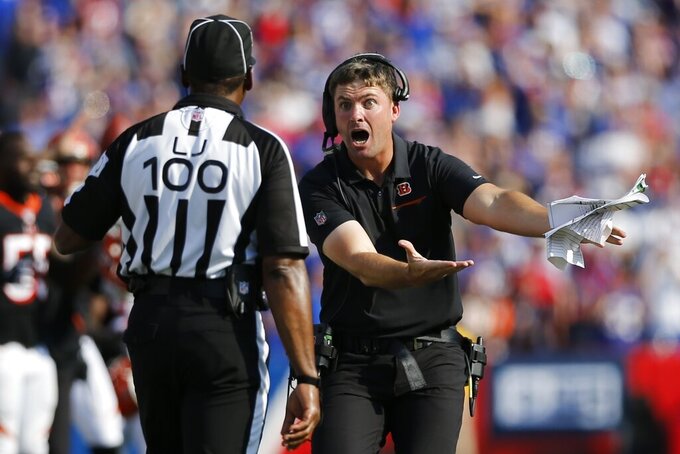 FILE - In this Sept. 22, 2019, file photo, Cincinnati Bengals head coach Zac Taylor argues for a call during the second half of an NFL football game against the Buffalo Bills, in Orchard Park, N.Y. Several teams are tanking, penalties are wrecking the flow of games, some of the biggest stars have been sidelined, the new pass interference rule appears to have been adapted only to quiet the uproar that started after last season's NFC Championship game, and even though ratings are up, it all looks like one big mess on TV. (AP Photo/John Munson, File)

CINCINNATI (AP) — Ryan Finley spent Sunday night watching Tom Brady get chased around by the Ravens' defense, the same one he'll face in his NFL debut with the Cincinnati Bengals.

Smart rookie. The NFL's only winless team has enough issues of its own as it begins looking ahead to next year.

The Bengals (0-8) made a surprising move before their bye, benching Andy Dalton in favor of the fourth-round draft pick who has yet to take a snap in a regular-season game. Finley hasn't even worked out much with the starting offense that he suddenly is expected to lead.

Then there's the whole set of problems that contributed to the Bengals failing to get a win with Dalton at quarterback. A cobbled offensive line has struggled to open holes for running backs or protect the quarterback. Cincinnati ranks last in the league in rushing and has given up the seventh-most sacks.

No matter. The Bengals have decided to start looking ahead to next season by giving Finley a chance to show what he can do against the Ravens (6-2) in a daunting situation for a rookie.

Given the circumstances, expectations are low for Finley's debut.

The Ravens have the NFL's second-best run defense, which forces quarterbacks to do more than they'd like. Plus, the Bengals have allowed 29 sacks despite using tight ends as extra pass blockers. Then there's the Ravens' penchant for blitzing, which will be Finley's biggest challenge.

"It's definitely a great test for him to see what he can do, and of course we know Baltimore is going to dial up every blitz in the book, so we've just got to be ready for all of that," running back Joe Mixon said. "I'm excited for him and it will be a big week for him."

Finley got a disappointment Wednesday when receiver A.J. Green was held out of practice because his surgically repaired left ankle was sore, making it unlikely he'll be available against Baltimore.

Green hurt the ankle during the first practice of camp and was expecting to return this weekend. Coach Zac Taylor said the ankle was bothering Green after a morning walkthrough, so he got treatment instead of practicing with the team in the afternoon. Green won't play until he can get through full practices without a problem.

Cincinnati also is missing John Ross, leaving the Bengals without a receiver who can present a deep threat. Finley was hoping to have Green back.

"Just having him out there changes our offense completely," Finley said. "It makes it a lot more dynamic."

There's also the question of how the players will respond to a team leader getting benched at midseason so the front office can begin looking ahead to next year.

"I don't know what it does for the locker room," cornerback Dre Kirkpatrick said Wednesday. "It's one of those things where you've just got to see how he performs. Obviously I'm not going to be 'hooraying' about Andy getting kicked out because he's a friend, been around him eight years, so I've grown to have a lot of respect for the guy."