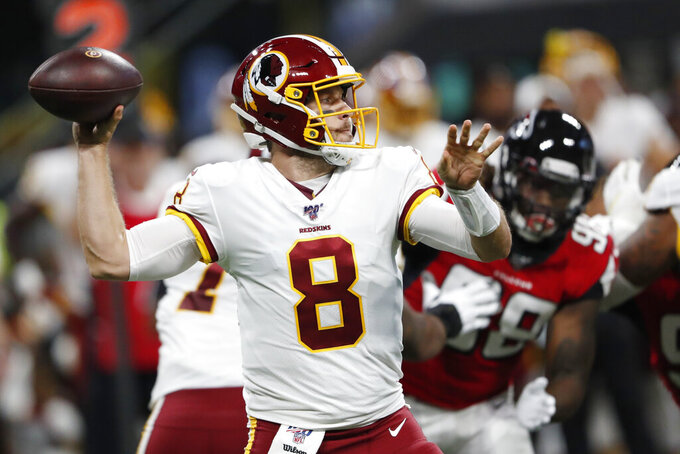 Washington Redskins quarterback Case Keenum (8) works in the pocket against the Atlanta Falcons during the first half an NFL preseason football game, Thursday, Aug. 22, 2019, in Atlanta. (AP Photo/John Bazemore) 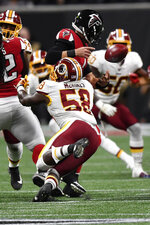 Haskins led Washington to three second-half scoring drives, including two set up by Atlanta's lost fumbles while attempting to field punts, and the Redskins took a 19-7 preseason win over the Falcons on Thursday night.

Keenum played the first half and lost a fumble, which helped the Falcons lead 7-6 at halftime.

Haskins, the first-round draft pick from Ohio State, completed 7 of 13 passes for 74 yards in the second half.

"I'm excited to see Dwayne make some throws from the pocket," Gruden said. "I like some things Case did. Obviously the turnover was disturbing. But other than that I think he moved the ball pretty well and did some good things. They both have done some good things this preseason."

Colt McCoy, Washington's third contestant in the quarterback competition, is still recovering from a broken right leg suffered in 2018.

Keenum, Denver's starter in 2018 after spending most of 2017 starting at Minnesota, said he's not anxious to have a starter named for the regular season.

"I don't necessarily need to be told, I guess you could say," Keenum said. "I'm fine with however things go. I went pretty much the entire season with the Vikings not being told I was going to start until Wednesday of that week's practice and we won 13 games that year, so that worked out all right."

Keenum completed 9 of 14 passes for 101 yards but his lost fumble when he was sacked by Deadrin Senat set up a second-quarter touchdown for Atlanta. Takk McKinley recovered the fumble and ran 17 yards to the Washington 33. Ito Smith's 5-yard touchdown run gave the Falcons a 7-3 lead.

Atlanta's Matt Ryan played the full first half in his most extended playing time of the preseason and completed 9 of 14 pass for 74 yards. He was perfect in the first quarter, when he completed each of his eight passes for 60 yards.

Veteran backup Matt Schaub was held out as Danny Etling became the latest third-string quarterback to play in the preseason. Matt Simms was held out with an undisclosed injury. Simms was signed after Kurt Benkert was lost with a toe injury.

The Falcons signed Etling last week after he was released by New England. Etling's lack of familiarity with the Falcons playbook showed as he struggled to move the offense in the second half and was dropped by two sacks .

Specials teams mistakes helped drop Atlanta to 0-4 in the preseason. Rookies Marcus Green and Olamide Zaccheaus lost fumbles inside the Atlanta 20 when trying to field punts in the third quarter. Each turnover set up short Redskins scoring drives led by Haskins.

Running back Kenjon Barner, who may be Atlanta's primary return specialist, did not play because of an undisclosed injury. "Barner is the one that will lead the way," coach Dan Quinn said when asked about his plan to address the situation.

Redskins: TE Jordan Reed left the game in the second half with a possible concussion. TE Matt Flanagan (hand) was listed as questionable in the fourth quarter. ... CB Fabian Moreau (ankle) and LB Shaun Dion Hamilton (chest) did not play.

Falcons: TE Jaeden Graham (knee) was declared out in the second quarter. CB Taveze Calhoun was helped off the field and then carted to the locker room in the fourth quarter with a possible concussion. DT Justin Zimmer (foot), FB Ricky Ortiz (ankle) and DT Ra'Shede Hageman (neck) were listed as questionable.

Washington running back Derrius Guice ran for 44 yards in his first game since a knee injury in the 2018 preseason ended his rookie season.

The Falcons suffered their 12th straight preseason loss. They last won on Sept. 1, 2016, against Jacksonville.

Atlanta's Giorgio Tavecchio, who missed two 42-yard field goal attempts in last week's 22-10 loss to the New York Jets, was wide left on a 39-yarder in the first quarter. The Falcons may be forced to look for help at the position. "Like everything we are going to evaluate that spot," Quinn said.

Redskins: Washington will return home to play Baltimore in its final preseason game next Thursday night.

Falcons: Atlanta will conclude its five-game preseason schedule when it visits Jacksonville next Thursday night.