Rookie Jones fitting in with Pats during offseason workouts 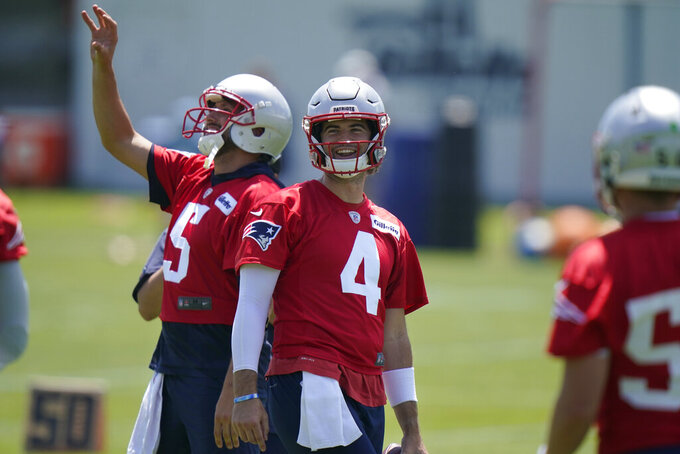 FOXBOROUGH, Mass. (AP) — Wearing No. 50, Patriots rookie Mac Jones may not look like a guy who belongs in the quarterbacks room at Gillette Stadium.

According to one of the team’s receivers, though, Jones carries himself like a quarterback who truly belongs there.

“Mac, good energy, awesome guy,” wide receiver Kendrick Bourne said as the Patriots continued their organized team activities on Thursday. “You can tell he’s happy to be here. He comes to work. You just can feel his energy, his leadership already.

“He has a swag to him that I didn’t know that he had at first,” Bourne, a veteran free-agent acquisition from San Francisco, said. “He’s out there confident, and that’s what you need in a quarterback and in all our players. You’ve got to have confidence. He’s come in with that.”

The Patriots’ first-round pick in this year’s draft, Jones arrives with an impressive college resume. The 6-foot-3, 214-pounder was a finalist for the Heisman Trophy in 2020, a season in which he quarterbacked Alabama to the national championship.

But gone is the No. 10 Jones wore for the Crimson Tide. Now he wears No. 50, a number traditionally worn by linebackers and linemen.

The temporary change is all a part of a tradition for Patriots rookies who play under coach Bill Belichick, the message being that the youngsters aren’t given, but must earn, their true numbers.

Jones has plenty of company on Belichick’s depth chart. Cam Newton, the 2015 MVP with Carolina, is coming off a disappointing season as Tom Brady’s successor at quarterback. Backups Jarrett Stidham and Brian Hoyer also return to a team that went 7-9 in 2020.

While Belichick made Jones the 15th overall pick in the draft, he was quick to make it clear that very night that Newton remains the team’s starter.

“Cam’s our quarterback,” Belichick said at the time.

While the four QBs the Patriots are currently carrying makes for a crowded situation on the practice field, Belichick said the situation is no different from other positions.

“That’s really a situation at every position,” said Belichick. “It doesn’t matter whether you’re talking about 13 offensive linemen or eight defensive tackles or four quarterbacks or nine receivers, it’s hard to get everybody the right amount of work or get them the high volume, but I think you just try to balance that out and give everybody the opportunity, try to spread the reps out, and it’s very important for players at every position to learn from the guy who’s taking the reps. So even though they’re not in there taking it, mentally they can still take it and go through the process.

According to tight end Hunter Henry, Jones is making the most of his opportunities.

“Mac’s doing a great job,” said Henry, a veteran free-agent addition from the Los Angeles Chargers. “He’s obviously new and I’m new so we’re just all going through (it) together and him being even new to the whole atmosphere of this next level. He’s doing a great job. Good to have him here. We’re all excited for him.”