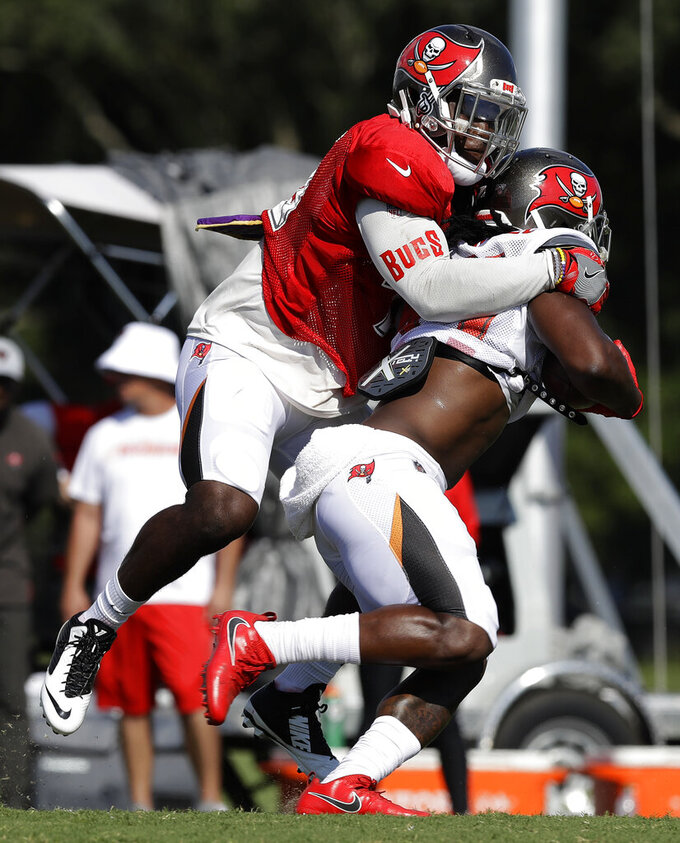 TAMPA, Fla. (AP) — Devin White is the new face of Tampa Bay's defense, and the 21-year-old rookie linebacker welcomes the responsibilities that come along with that.

"I've always been in big roles in my life. Everything I did, I always kind of grew up faster than probably what I should've, and I think it kind of helped me," White, the No. 5 overall pick in the NFL draft out of LSU, said about lofty expectations accompanying his arrival to a franchise that's missed the playoffs 11 consecutive seasons — the second-longest drought in the league behind Cleveland's 16-year hiatus.

"I wasn't a guy who sat around and played video games all day. I was a guy who was working, trying to make my own cash and stuff," White added. "I always have been that guy, and I'm going to keep being that guy. I've always had a lot of pressure on me, and always did good with it. I'm very comfortable with myself and knowing my abilities."

With six-time Pro Bowl tackle Gerald McCoy now wearing the uniform of the NFC South rival Carolina Panthers, White is the unquestioned leader of a young defense that ranked among the league's worst over the past decade.

The Bucs lured coach Bruce Arians out of retirement to try find out once and for all if fifth-year pro Jameis Winston is the team's long-term answer at quarterback. He's brought in former New York Jets coach Todd Bowles to try to fix the defense, which has converted to a 3-4 scheme being built around the 6-foot-1, 237-pound White.

Arians and Bowles feel the 2018 Butkus Award winner as college football's top linebacker is perfect fit for what Tampa Bay wants to do. One of the first orders of business after rookie minicamp was assigning the task of calling defensive plays to the native of Springhill, Louisiana, whose coach at LSU, Ed Orgeron, has compared him favorably to a couple of other linebackers Orgeron observed up close during a long coaching career, Ray Lewis and Patrick Willis.

"I think that was a big part of the evaluation process. How mature he was and the accolades from coaches that we really trust that were around him every day, and you hear Ed now talk about how they can't replace him," Arians said. "So, the sky' the limit. Let's let him fail before we pull him back. See what he can't do. Right now, he can do everything. So until he says: 'Whoa, I can't learn all this stuff or I can't do that.' I don't think that's ever coming out of his mouth, though, knowing him."

White is flattered by talk of similarities between him, Lewis and Willis at this stage of their careers. He also knows it's one thing to be an outstanding prospect entering the NFL and accomplishing as much as Lewis and Willis did as pros.

Still, he's embracing the challenge of a making a difference for the Buccaneers, who haven't won a playoff game since the club's 2002 Super Bowl run led by Hall of Fame defenders Warren Sapp and Derrick Brooks.

If selecting him fifth in the draft didn't send a message about how much they're counting on him, there was no mistaking the expectations after Arians informed White he was putting the "green dot" on the rookie's helmet.

"I didn't know what a green dot was, and then once I put the helmet on, I heard Coach Todd talking through the helmet. I was like: 'Aw man, they did put a lot of responsibility on me,'" White said. "But I feel like I asked for it, and I feel like I can handle it. I never shy away from anything because I don't feel like there is anything in the world that is too big for myself."