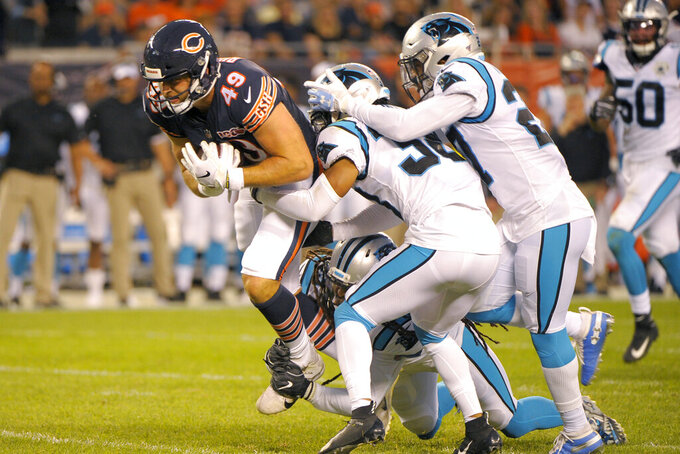 Chicago Bears tight end Ian Bunting (49) advances the ball on a pass reception from Chase Daniel during the first half of an NFL preseason football game against the Carolina Panthers on Thursday, Aug. 8, 2019, in Chicago. (AP Photo/Mark Black) 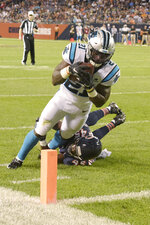 Slye made field goals of 42, 55 and 29 yards and the Panthers had a 7-yard touchdown catch and 11-yard TD run from rookie Elijah Holyfield in a 23-13 victory over the Bears.

The Panthers already have a standout kicker in Graham Gano, and it's possible Slye put himself on the radar of the Bears as well as other teams seeking a kicker by hitting a second-quarter kick of 55 yards for a 6-0 lead.

"He handled it really well," Panthers coach Ron Rivera said. "We had an opportunity for him to kick a 55-yarder. During practice, he hit a 60-something yarder. So I thought this was well within his range and it was kind of fun to watch him kick it."

The former Virginia Tech player made a 29-yarder in the third quarter to expand Carolina's lead to 16-10. Slye's 42-yarder came on Carolina's second possession to open the scoring.

While the Bears look for a kicker, the Panthers are trying to determine who will back up quarterback Cam Newton.

Both Carolina quarterbacks Kyle Allen and Will Grier enjoyed solid efforts, with Newton sitting out to rest his shoulder after offseason surgery.

Allen started and completed 7 of 11 for 76 yards, while Grier completed 9 of 16 for 77 yards with a touchdown and an interception. Grier's 7-yard TD pass to Holyfield put the Panthers ahead 13-10 in the third quarter, and was set up by a 57-yard punt return from Terry Godwin. Holyfield added his 11-yard run, cutting to the left sideline in the final two minutes.

"I would say they were very efficient," Rivera said. "Both had their moments early on where they kind of struggled a little bit, just trying to settle themselves down.

"You can tell because there were a couple of balls high early. Then as they got more and more comfortable you saw them become more proficient with their decision-making."

Bears rookie running back David Montgomery made his debut and broke off left tackle for a 7-yard TD in the second quarter, and Fry's point-after kick put the Bears up 7-6. Montgomery finished with 16 yards on three rushes and caught three passes for 30 yards.

Fry later had the Soldier Field fans roaring with a 43-yard field goal to close the first half, the same distance and at the same post Cody Parkey struck on his double-doink to end the Bears' 16-15 playoff loss last season to the Philadelphia Eagles.

"When your job is on the line, every kick is pressure," Fry said.

Rivera called a timeout to freeze Fry just before the kick. The Eagles had done the same to Parkey.

"You know what is funny, I did that to help the Bears because they are in a kicking contest," Rivera said.

Pineiro wasn't as fortunate, missing wide left on a 48-yard attempt in the first half. Pineiro did make a 23-yard chip shot to get the Bears within 16-13 in the fourth quarter.

"This was the big stage tonight for them," Bears coach Matt Nagy said of his kickers. "This was as big as we can get it before the season starts."

Chicago quarterback Chase Daniel completed 11 of 13 for 120 yards and a TD while Tyler Bray was 8 for 17 for 85 yards for the Bears. Rookie tight end Ian Bunting led the Bears with 77 yards on three receptions.

Holyfield, the son of former heavyweight boxing champion Evander Holyfield, picked himself up and kept on going in the fashion of his famous father.

Elijah Holyfield lost a fumble in the second quarter of his first NFL game. The former Georgia back was hit by Josh Woods, coughed it up as he went to the ground and James Vaughters recovered to set the Bears up for their drive to the go-ahead touchdown in the second quarter.

Holyfield came back in the second half and caught a 7-yard TD pass in the third quarter to put the Panthers ahead for good, 13-10. Holyfield had an 11-yard TD run with the Panthers trying to drain the clock late in the fourth quarter. He finished with 26 yards on nine rushes and caught two passes for 13 yards.

"Other than the fumble, I was happy with my performance," Holyfield said.

Holyfield found things moving a bit quicker than at Georgia.

Nagy downplayed the chances of starting quarterback Mitchell Trubisky playing in the preseason opener earlier in the week, but Trubisky did start. He played one series, didn't throw a pass, and the Bears were off the field in three plays.

"Even though it was just a couple handoffs, I feel just that part is good for him," Nagy said.

The Panthers' defense kept the Bears in check much of the game, with Marquis Haynes and Brian Burns each getting two sacks.

"I thought Burns was explosive," Rivera said. "He did exactly what we thought he was. I thought Marquis (Haynes) did some good things too. These guys are explosive football players and these are the kind of guys you have to have in your rotation."

Panthers: Tight end Ian Thomas suffered a rib injury and left the game in the second quarter. He did not return. ... Cornerback Lorenzo Doss left in the third quarter with a rib injury and did not return. ... Linebacker Luke Kuechly did not play after an injury scare earlier in the week. Kuechly absorbed a blow in practice but did not go into the league's concussion protocol.

Bears: The Bears did not have an injury in the game, but cornerback Kevin Toliver II was a scratch at game time due to illness.