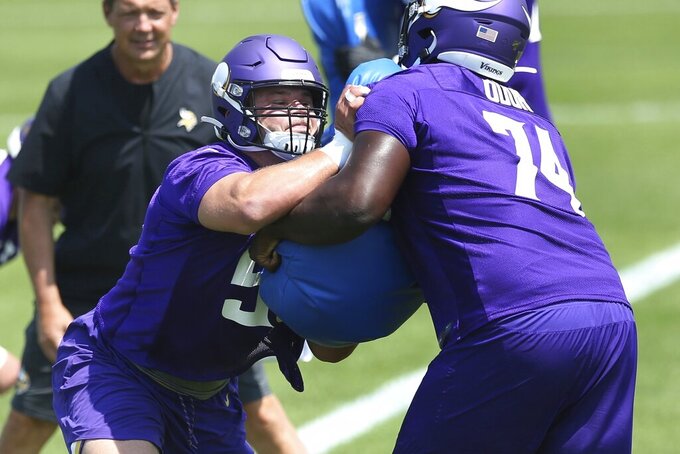 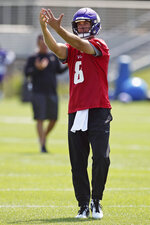 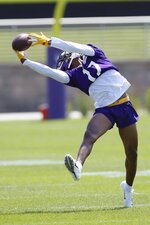 EAGAN, Minn. (AP) — Three seasons ago, when the Minnesota Vikings stumbled after a 5-0 start and finished just 8-8, one of their many problems was a negligible contribution by their collection of first-year players.

"That was the rookie class that didn't really give us much that year," Zimmer said, reflecting on the 2016 draftees, "so I figured the more that we could help them with these kinds of things, the faster that they can get up to speed, they might be able to help us a little bit."

Headlined by center and first-round draft pick Garrett Bradbury, a group of 37 rookies and assorted other players took the field at team headquarters on Tuesday for the first official practice of training camp. The balance of the squad will join them on Friday.

The Vikings in 2019 will be a decidedly veteran team, molded with a Super Bowl-or-bust mentality and featuring 12 players with a salary with an average annual contract value of $9 million or more. They likely won't last long in the postseason, let alone qualify for it, without a productive core of players still on rookie-level salaries.

Bradbury will be leaned on heavily, the anchor of an offensive line that has struggled more often than not in recent years and must better protect quarterback Kirk Cousins. Tight end Irv Smith Jr. (second round) and running back Alexander Mattison (third round) will be asked right away to play supporting roles in the offense.

Long snapper Austin Cutting, his military service requirement ironed out with the Air Force Academy, would not have been drafted had the Vikings not believed he could beat out Kevin McDermott for that specialist's role. Perhaps cornerback Kris Boyd, another seventh-rounder, will prove his worth as needed depth behind starters Xavier Rhodes and Trae Waynes, with Holton Hill facing an eight-game suspension and Mike Hughes returning from reconstructive ACL surgery on his left knee.

Three years ago, wide receiver Laquon Treadwell was the first-round pick with only one catch to show for his first NFL season, second-rounder cornerback Mackensie Alexander was slow to warm to the slot position, and fourth-round offensive tackle Willie Beavers was overmatched. The draft classes from 2017 and 2018 have so far proven to be more impactful.

Given his draft status and critical position, Bradbury will face the most pressure to perform from the outset. The North Carolina State product clearly has the confidence to meet the expectations that have surrounded him.

"It's just trusting the preparation," Bradbury said. "I've been studying the playbook a lot, and I just need to be confident with my calls."

Said Zimmer: "He's a brilliant kid, so that helps a lot. He's going to have a big load."

Cutting will, too, but in a different way. He's a second lieutenant in the Air Force, which has assigned him to recruitment. So he'll be able to fulfill that post-graduate duty while not having put his NFL dream on hold.

"The Academy has helped me a lot, not just in the football aspect but in everything and life, too, so I have people there that have my back," Cutting said, adding: "It's definitely a stressor taken off of me. It was stressful, because it was nothing that I could control yet was still something that I had to keep up with and monitor. Now it's nice to be able to be here and focus on football."

These rookies, from Bradbury to Cutting, likely won't feel the same type of burden that so many others in the organization will carry into this season, whether it's acknowledged publicly or not.

"The expectations or the pressure are no different than they are any other year," general manager Rick Spielman said. "I know last year was disappointing from where we felt we were and where we ended up. I know we did a lot of things to try and correct those areas that we needed to address during the offseason, and I think we've accomplished that so far. But it's yet to be determined."