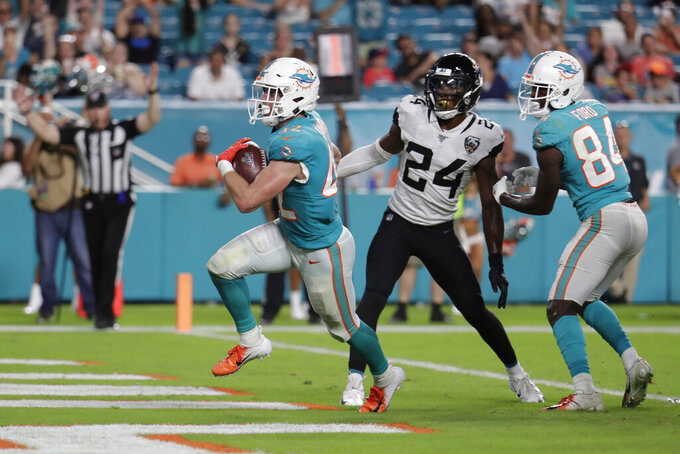 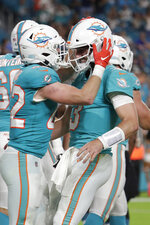 Rosen came off the bench late in the third quarter and engineered a 99-yard touchdown drive, helping the Dolphins to a 22-7 preseason victory over the Jacksonville Jaguars on Thursday night.

Rosen, who is battling Ryan Fitzpatrick for the starting job for Miami (2-1), was 5-for-7 for 59 yards and a touchdown and ran four times for 23 yards.

"I thought I made a couple of good plays," Rosen said. "My goal is to play better than last week, and I think I did that."

Dolphins coach Brian Flores hasn't said if he is any closer to making his choice as the starting quarterback.

"There is still evaluation," Flores said. "We saw a lot from both guys today. Fitzy did a good job. Josh did a good job. As a staff we'll get together and talk it over. We'll make a decision we feel is best for this organization."

Nick Foles, making his first appearance of the preseason for the Jaguars (0-3), played the first quarter and went 6-for-10 for 48 yards with one touchdown and one interception.

"There's some good, there's some bad," Foles said. "The big thing was just being out there. It was my first time wearing the Jaguars uniform in a game and that was emotional in itself. It was a good first step forward."

Rookie defensive end Josh Allen, the Jaguars' first-round draft pick, had four tackles, including two for losses in the first half, and two quarterback hits.

"He's been having a great camp and he's really going to help us," Jaguars coach Doug Marrone said. "He's in the backfield, making plays all over the field and he's got a big smile on his face. He loves to play the game."

Rosen entered the game and led a 13-play drive that included a 39-yard reception by Isaiah Ford and a 14-yard scramble by Rosen and culminated in a 5-yard touchdown run by Patrick Laird.

Fitzpatrick played the first 2½ quarters. He was 12-for-18 for 126 yards and one touchdown — the first time he has led Miami into end zone in three preseason games.

"It was obviously very sloppy in the first half," Fitzpatrick said. "Thank goodness it was a practice game, is I think how we look at it."

Most of the yardage for both quarterbacks came when they played with and against second- and third-stringers.

Fitzpatrick didn't complete a pass to a wide receiver until a 14-yarder to Kenny Stills in the third quarter.

Jason Sanders kicked field goals of 40, 46, and 43 yards for the Dolphins.

Foles hit Dede Westbrook on a 10-yard touchdown pass in the first quarter to give the Jaguars a 7-0 lead.

The Dolphins didn't have a first down until their fourth possession, when the Jaguars jumped offside on third-and-5.

In the first half, the Dolphins gained 47 yards and were penalized for 63.