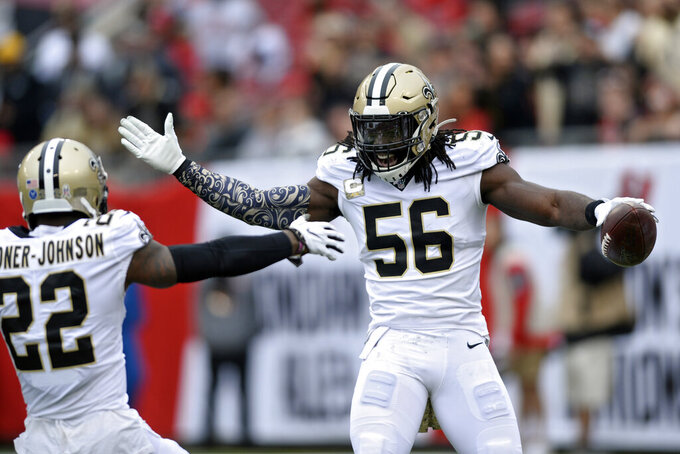 New Orleans Saints outside linebacker Demario Davis (56) celebrates with defensive back Chauncey Gardner-Johnson (22) after Davis intercepted a pass by the Tampa Bay Buccaneers during the first half of an NFL football game Sunday, Nov. 17, 2019, in Tampa, Fla. (AP Photo/Jason Behnken)

NEW ORLEANS (AP) — Even with cornerback Marshon Lattimore injured and unavailable, the New Orleans Saints’ defense again demonstrated its ability to stuff the run, make quarterbacks uncomfortable and tip the balance of a game.

The Saints haven’t lost two straight games since the first two weeks of the 2017 season, and their improvement on defense is a big reason why.

On Sunday at Tampa Bay, the Saints were looking to bounce back from an uncharacteristically woeful loss to Atlanta in which New Orleans was held without a touchdown at home — something that had never happened when Drew Brees was at quarterback.

Brees and the offense were better at Tampa Bay, but didn’t have to be great because the defense was in a 34-17 triumph, intercepting Buccaneers QB Jameis Winston four times, sacking him twice, and harassing him most of the game.

“You are not going to lose many games when you get four takeaways like that,” Saints coach Sean Payton said. “We affected the quarterback, moving him off his spot. I thought that was important, and guys competed. It is a real good group of receivers (on Tampa Bay’s roster) and I thought we really competed.”

After the Saints saw two promising possessions inside the Tampa Bay 30 ended with field goals, their first touchdown on a 16-yard pass from Brees to Michael Thomas was set up by linebacker Demario Davis’ interception of a ball that was floating in front of him after safety Marcus Williams had helped break up a pass.

“We always do our takeaway drills and it paid off,” Williams said.

Payton sounds pleased by the resurgence of Williams, who has four interceptions this season, matching his career high in 2017, when he was a rookie.

“When we’re winning up front and getting the quarterback off his spot, it’s kind of a complementary, back and forth, chicken or the egg. The secondary’s play gets enhanced, their ability to break on balls, all of that.”

The Saints woke up Monday tied for fifth in the NFL in total defense and ranked third against the run.

So while the Payton-Brees era has been known mostly for prolific offense since it began in 2006, what had made the Saints tough to beat this season is a defense that was dominant enough to carry the club to five straight wins even when Brees was sidelined by a thumb injury.

The offensive line and running game got back on track after an anemic showing against Atlanta that saw Brees sacked six times.

The Saints allowed only one sack and rushed for 109 yards against a Tampa Bay front that ranks second against the run.

“That Atlanta game was not what we’re about and something we weren’t proud of at all. There was a lot of bad stuff that happened in that game and we looked at that film and corrected it,” Saints right tackle Ryan Ramczyk said. “Two of the most important things are keeping Drew protected, keeping him clean, and then being able to open up the run game. So week to week that’s something we take a lot of pride in.”

Penalties — including some untimely ones — continue to plague the offense. Brees was particularly unhappy with a holding call that wiped out an Alvin Kamara touchdown.

“We shot ourselves in the foot with some penalties,” Brees said. “Self-inflicted wounds, unforced errors — we got to clean that up. If we want to be as good as I think we can be, you have to be better in that area.”

Nick Easton, a free agent acquisition who was unable to beat out rookie Erik McCoy at starting center and wound up being inactive several games, got his first start at left guard in place of injured 2018 Pro Bowl selection Andrus Peat.

“Nick did a great job filling in for Peat, so we’ll look to continue that this next week,” Ramczyk said. “We’ve always had a ton of confidence in our backups. So Nick, we knew he’d be able to step in there and play a solid game.”

Second-year receiver Tre’Quan Smith did not have a catch and his offensive pass interference penalty wiped out Kamara’s 18-yard gain on a catch-and-run out of the backfield.

Tight end Josh Hill went out with a concussion. Hill is a regular in both the offense and special teams and it’s unclear when he’ll be back. The Saints also are hoping Lattimore’s return from a hamstring injury will be sooner than later, but his timeline also remains unclear.

36 — The number of consecutive games, including playoffs, in which the Saints defense has prevented an opposing rusher from gaining 100 yards.

The Saints host the Panthers with a chance to take a four-game lead in the NFC South, then have a quick turnaround at Atlanta on Thanksgiving night. Also on the horizon are what looks like a significant matchup for top seeding in the NFC playoffs when San Francisco visits on Dec. 8.